“The Crazies” is a sporadically splendid thriller saddled with seriously banal horror embellishment. It should come as little surprise to learn the film is a remake, extracted from the thin skin of George Romero’s 1973 chiller. The paranoia and general Vietnam-era dread has been chiseled off the material by director Breck Eisner, who shapes a more direct shot of scares, gussied up with overtly slick filmmaking that spends more time on technical challenges than it does lacing together a consistently nail-biting motion picture.

Something is happening to the residents of a rural Iowa town that perplexes Sheriff Dave Dutton (Timothy Olyphant, “Live Free or Die Hard”). A mysterious illness is turning the locals into bloodthirsty, zombie-like killers, with the wave of infection creeping throughout the area, striking indiscriminately. While Dutton and Deputy Clank (Joe Anderson, “Across the Universe”) stop to figure out their next move, a swarm of U.S. soldiers swoop in to seal off the town, killing off the infected and sending the rest into quarantine. Realizing their situation is grim, Dutton rescues wife Judy (Radha Mitchell, “Surrogates”) from medical detainment and takes off with Clank, hoping to break out of town and find a safe haven free of the deadly plague. 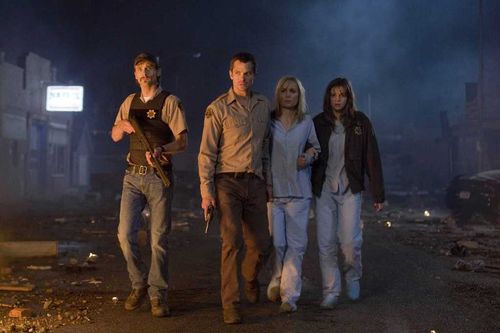 Successfully modernizing Romero’s “The Crazies” isn’t exactly moving a mountain. A tinny thriller with porno-like production values, the original hasn’t stood the test of time, remaining more of an earned stretch mark for the director than a creative highlight. Eisner scraps Romero’s spare determination for a wildly visual film, which imagines the infected as stalking, zoned-out demons with an irresistible urge to exterminate anything in their path. Feeling more “Dawn of the Dead” than helplessly infirmed, the titular creatures are impressively made-up in increasingly horrifying ways, but they sum up the major problem “Crazies” faces as it continues down a path of doom: it prefers horror over suspense.

The crackerjack opening act of the picture sets a forbidding tone, as Dutton slowly processes the gravity of the infection, investigating the source of the nightmare as soldiers in intimidating NBC suits flood the town, coldly killing and burning terrified residents. Eisner, who hasn’t been seen on the big screen since 2005’s “Sahara,” mines the story potential smartly, creating a few marvelous moments of menace that play up the tension of the outbreak, not just money shots of gushing wounds. Watching the town crumble into madness is exactly where “The Crazies” inhales most interestingly, capturing the intensity and futility of the moment with welcome screen precision. But let’s face the reality: Eisner is itching to scare the pants of viewers. 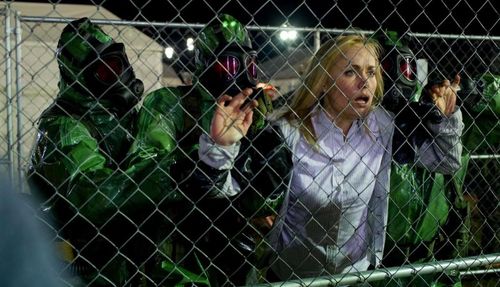 Once “Crazies” switches over to ghoulish business, the concentration of the picture wanes. Eisner starts poking around for grandiose gore zone set-pieces (including an inane clash inside a working car wash), expelling more energy on cheap jump scares and hackneyed visual touches than sustaining the unsettling devastation. The scares mostly originate from the horror playbook and have a nasty way of underlining the apathetic performances, which, to be fair, emerge from lackluster actors (Olyphant barely has a pulse here) burdened with atrocious lines. “Crazies” is better off silent, but Eisner likes to keep the talent chatty, killing suspense by having his cast verbally reinforce the obvious bewilderment.

Surprisingly, “The Crazies” remains a bleak event until the bitter end, where our heroes face a chilling military finality. The picture deserves credit for maintaining a tone of despair, even if the excessive showiness of the direction foolishly slices the delicious doomsday mood in half.