This latest effort to ignite a new generation of “Harry Potter” literary franchise hysteria for theaters has played its cards smartly by bringing in the actual director of the first two “Harry Potter” pictures. Chris Columbus returns to fantasy filmmaking after his disastrous flirtation with teen comedy in last summer’s “I Love You, Beth Cooper,” but a little rust still remains on his filmmaking antennae. Boldly produced and vivid throughout, “Percy Jackson & The Olympians: The Lightning Thief” is a clunky kid-sized epic, able to conjure colossal acts of Greek myth wonderment, but never brave enough to shut its pie hole and let the audience process the screen magic.

A high school student with dyslexia problems, an abusive stepfather, and a strange comfort with water, Percy Jackson (Logan Lerman) doesn’t quite have a grasp on his potential. When an encounter with a demon nearly kills him, satyr Grover (Brandon T. Jackson) and centaur Chiron (Pierce Brosnan, pulling off the half-man/half-horse bit gracefully) reveal to the bewildered young man that he’s the son of Poseidon (Kevin McKidd), and that trouble has come to Earth because someone has stolen Zeus’s thunderbolt, urging the Gods of Olympus into war if the bolt is not returned. Coming to grips with his powers and this new world, Percy heads across the country with Grover and demigod Annabeth (Alexandra Daddario) to the underworld of Hades, hoping to retrieve his kidnapped mortal mother (Catherine Keener) and solve the thunderbolt mystery, saving the world in the process.

Adapted from the popular book series by author Rick Riordan, “Percy Jackson” has all the working parts necessary for a rousing fantasy franchise, using the golden “Harry Potter” template of sensitive teen development and fantastical sights to help butter the bread. It’s all so familiar by now, leaving the true potential of the material in the hands of a mighty director capable of avoiding easy comparisons to the Hogwarts juggernaut, which is why Columbus is an inspired choice from a safe distance. Here’s a man who knows a thing or two about pubescent troubles, complex visual effects, and works well with actors, bringing out age-appropriate performances with little in the way of obvious manipulation. 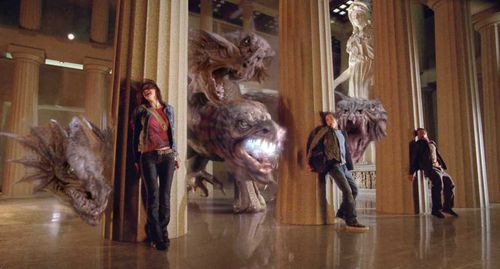 Unfortunately, Columbus’s instincts fail him with “Percy Jackson,” which pushes and shoves its way to illuminate acts of amazement instead of allowing the viewer to come to these same conclusions. The problem lies mainly in the direction, which encourages the semi-young cast to broadly bray astonishment at visual effects that were laid in months later, with Lerman’s entire performance angled around his numerous “woooooah!” reactions. The whole cast is guilty of overplaying their responses, as Columbus urges everyone to go bug-eyed and tongue-crazy at every turn of the script, ruining the specialness of the various effects. Why even show up when Columbus has already extracted his needed levels of reaction from the characters? The “Harry Potter” films were more measured in this regard. They were still pushy, but permitted a few moments of genuine awe before Columbus started stroking his own wand.

The performances aren’t inspiring, from Lerman’s grating hyperactivity to Jackson’s jive-talkin’ sidekick character. Better is the supporting cast the trio meets as they speed across the country on the hunt for magical blue pearls that will grant quick access out of Hades. Uma Thurman has a nice glammy turn as Medusa, who Percy fights off using a clickable pen/sword device and the power of reflection stolen from the back of his iPod. Steve Coogan shows up as Hades, who takes the form of either a winged demon of scorching hellfire or a burned-out classic rocker -- a predictable visual gag that leans for cleverness in a film with little use for such extravagance. Rosario Dawson is aptly cast as temptress Persephone, ushering in some needed sex appeal to combat the chaste teen adventuring. 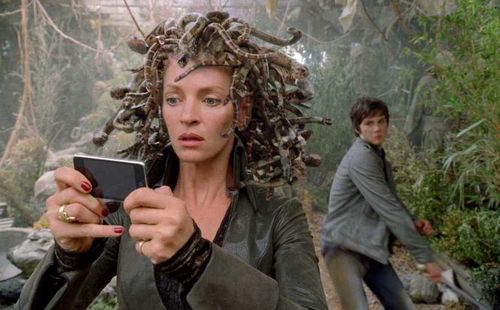 Truthfully, all the actors are merely action figures to weave around the visual effects, with our heroes battling a fire-breathing Hydra, a hulking Minotaur, and Medusa’s stone-forming gaze to liven up the road trip premise. Also adding visual heft is Percy’s control of water and his winged Chuck Taylors, taking him skyward when the moment calls for flight.

Greek mythology is an amusing starting point for “Percy Jackson,” with the material merging famous landmarks with earthbound locations (e.g. The Parthenon in Nashville, Olympus via the Empire State Building, and Hades in Los Angeles) in a playful manner, along with a towering depiction of godly presence. It’s more “Clash of the Titans” than scholastic, but hey, it may just turn younger viewers into fans of this stuff, which is always a good thing.

Taking its time to land a comfortable ending, “Percy Jackson & The Olympians: The Lightning Thief” is intended to kick-start a new franchise, in the vein of “Harry Potter” and the recently revived “Chronicles of Narnia.” Thankfully, Columbus doesn’t end the picture with a cliffhanger, but he doesn’t exactly inspire much hope for future installments. I trust the filmmaker, if faced with an opportunity for a second chapter, will remain relaxed enough to leave the awe to the audience and let the actors take care of the rest through body language. 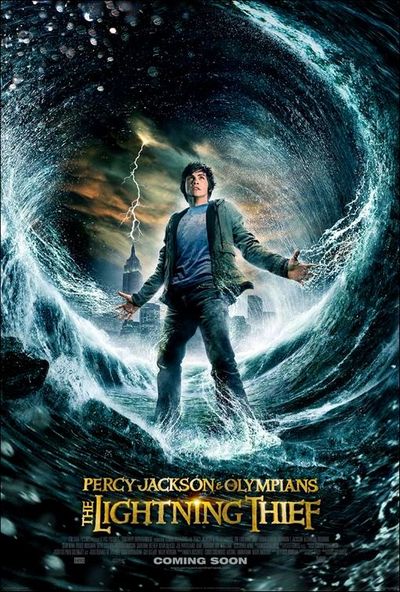