“Hachi: A Dog’s Tale” is a poignant story of animal attachment, glazed with a sporadically viscous coating of sentimentality. Based on a true story, which was made into a blockbuster Japanese motion picture in 1987, “Hachi” has been Americanized, taking an account of lifelong affection to an attractive Northeastern playground, not to mention hauling Richard Gere in for some required star power. A circular routine of smiles and tears, “Hachi” is delightfully gentle and engaging, refusing to bloat the material past an elementary message of canine loyalty.

On his way home from a train station, Professor Parker Wilson (Richard Gere) comes across a lost Akita puppy wandering around the rails. Fearing a horrible fate if left in the local pound, Parker brings the dog to his disapproving wife, Cate (Joan Allen), who demands an effort made to locate the rightful owner. Growing attached to the dog, branded Hachiko after a Japanese symbol left on his collar, Parker swiftly bonds with his furry pal, spending the year developing an unbreakable friendship. Picking up on a commute pattern, Hachi follows Parker to the train station to see him off every day, returning in the evening to greet his master, much to the delight of the locals (including Jason Alexander). However, when Parker doesn’t return home one day, Hachi is left waiting for his master, with days turning into years as the dog patiently sits at the station, hoping his friend will return. 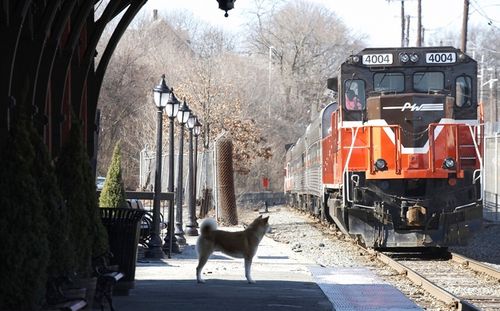 “Hachi” assumes a different set of goals than the spastic comedy stylings of dreck like “Marley & Me,” which also explored the connection between man and dog, albeit in a far more slapstick manner befitting a mainstream release. “Hachi” is a more specialized product, with director Lasse Hallstrom cutting into the heart of demonstrative canine devotion, as Parker comes to adore his four-legged pal in a way that goes far beyond customary pet appreciation. Hachi is family, assuming a position of attention for Parker and Cate as they deal with empty nest syndrome, while giving the professor an unlikely escort for his daily grind of train rides.

Hallstrom isn’t afraid to pull the cute card often, since Hachi is a gorgeous animal with knowing eyes and a lush coat of amber fur that begs to be stroked for hours on end. The chemistry between Hachi and Gere (who looks to be having the time of his life playing with the pooch) forms the spine of the picture, with their horseplay (including a skunk attack and television time) and acts of concern surprisingly organic, free of overt off-camera prodding. Hallstrom attempts to get into Hachi’s mind with a bizarre use of “dog-vision” POV for certain sequences of animal perception, but the majority of the picture stays human and overwhelmingly sweet, never plunging into mawkish behavior. Hachi remains a steadfast dog of curiosity and company, not a slapstick machine tearing up the neighborhood. His proud Akita heritage wouldn’t allow for such monkey business. 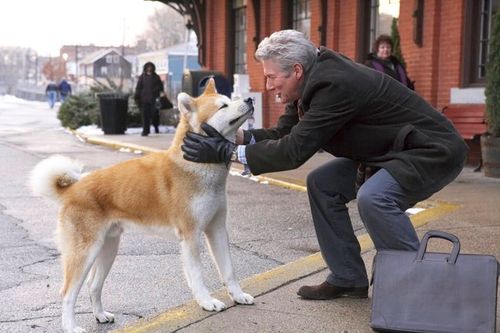 The final act heads into potent tearjerker realms, as Hachi holds out hope for Parker’s return, while the rest of the community moves on, taking care of the dog without intruding on his demonstration of loyalty. It’s wholly heartbreaking stuff, though modernized carefully by Hallstrom (the real Hachiko story dates back to the 1920s) and spread out to capture as many sniffles as possible. “Hachi” doesn’t exactly know what to do with itself when reality sets in, but I suppose that sense of disorientation mirrors the dog’s experience quite succinctly. Hallstrom yanks on the heartstrings in the final reel, but the sentiment feels earned, paying off a tender tale of friendship with a touching closer sure to encourage sobs and considerable more respect for the privilege of pet companionship. 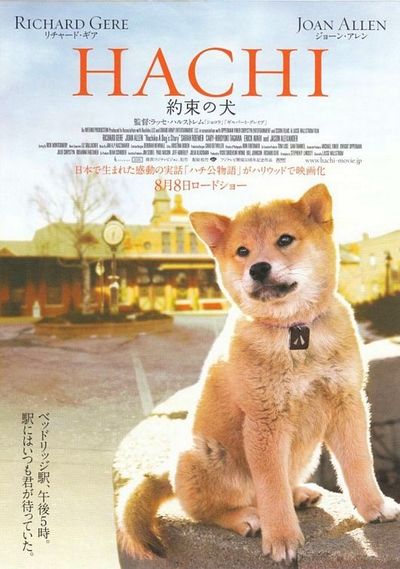 I've heard great reviews about the Japanese version from my Japanese friend who remembers the story and saw the original movie and am looking forward to see this true story. Will the new re-make be out in March 2010 in the U.S.? I was waiting for the movie trailers to appear in January but so far have not seen any ads for it.

A must see! Especally those who love good, clean and wholesome Family Entertainment.

(This coming from a non-gushy, non pet person).

A really nice, touching movie. apparently it went straight to DVD here in the US.

What a sweet and gentle movie. It was wonderful to see Richard Gere, who has aged with grace in his long film career, play the part. I totally love him and the dog.

Best dog movie I have ever seen.