It’s refreshing to see Robert De Niro shove aside his tough guy screen persona now and then, to remind viewers used to his antics that beyond his icy glare and powder keg temper lies a uniquely sensitive actor. “Everybody’s Fine” is a thorough tear-jerker, but the feature earns most of its sentiment, due in great part to De Niro and his gentle, worrywart lead performance. I’m not suggesting this is De Niro at his most invested and commanding, but his communication of concern adds a needed push of authenticity to a film forever on the precipice of pure schmaltz.

Recently widowed and suffering from lung problems due to his years coating telephone wires with PVC, Frank (Robert De Niro) is eager to connect with his four estranged children, Rosie (Drew Barrymore), Amy (Kate Beckinsale), David (Austin Lysy), and Robert (Sam Rockwell). When they all ditch him over a planned reunion weekend, Frank decides to surprise them by traveling to their doorstep unannounced, looking to force his kids into some alone time. Traveling across the country, Frank finds his children panicked to cover their real jobs and lives, trying to impress their father with a false representation of success. Concerned his kids are fearful of his disapproval, Frank spends his downtime reflecting on his tough-love parenting skills, hesitant to admit he might’ve been the one to push his family away.

In “Everybody’s Fine,” De Niro plays the all-American male provider; a man who’s made a living by any means necessary to support his family, doing the dirty work because that sort of responsibility was expected of him. He took a wife, had children, finally reaching his retirement years ready to survey the results of his hard work. The blue-collar, one-hand-on-the-belt parenting mentality is a perfect fit for De Niro and his trademarked emotive distance. It’s a generous role that gives the legendary actor a proper spectrum of responses to play as Frank inches toward uncomfortable domestic realizations. Working a concerned, slightly daffy, travel-weary routine, De Niro harpoons Frank’s emotional challenges, irritated further by the prolonged absence of David, who Frank rode the hardest as a child.

A remake of 1990 Italian motion picture, “Everybody’s Fine” has the type of plot that would sour immediately under an indecisive director. Thankfully, Kirk Jones (“Waking Ned Devine”) cleanly registers the drama as heartfelt, paying attention to the reality of the situation, and not the melodrama. Frank’s not a monster, he just wanted the best for his kids. The family isn’t a collection of screenwriting clichés, but a unit that splintered under the weight of expectation, with each child not necessarily living the dream, but living a life, paranoid that’s not enough for their father. The sentiments are genuine and expressed skillfully by the ensemble and Jones, giving atypical life to the picture. During the persuasive opening half of the feature, “Everybody’s Fine” is touching without slipping into a cloying routine, hitting a sweet spot of regret that I’m certain most viewers around the ages of these characters will be able to relate to in some way or another.

There’s a smeary quality to the anamorphic widescreen (2.40:1 aspect ratio) that appears inherent to the HD cinematography. While noticeable, it’s never outrageously distracting. The rest of the presentation is loaded with comfortably saturated colors, best when surveying seasonal and cityscape changes, with everything angling toward a warm center. Skintones can read somewhat too pinkish, while black levels are soft, but never intrusive.

The 5.1 Dolby Digital sound mix here is enjoyably reserved, with little in the way of major sound conflicts and overtly heightened moments of dramatic expression. Dialogue is key here and the exchanges remain accessible throughout, blended well with gentle scoring selections. City life brings some bustling activity into the surrounds, but the majority of the track stays satisfactorily frontal. Orchestral sequences offer soothing depth and some low-end response. A French track is also included.

French and Spanish subtitles are offered.

“The Making of Paul McCartney’s ‘(I Want To) Come Home’” (9:47) offers the music legend an occasion to clarify his creative process, and how the film challenged his songwriting skills. Charismatic as always, It’s fantastic to have McCartney explore his thoughts and impulses.

“Deleted & Extended Scenes” (11:49) present more of Frank’s interactions with the insightful locals he meets along the journey (including one fellow who’s mastered hot dog preparation), and two extended moments spotlighting Frank and his painful memories of parental discipline.

Turbulence hits in late into the film when it dawns on Jones that he can’t quite maneuver the characters quickly enough to express themselves in full. It leads to at least two dreadful scenes of confession, poorly mounted and rushed, lacking the poignancy the rest of the film had been nursing wonderfully. “Everybody’s Fine” eventually unplugs the waterworks in the finale, but it’s an earned response within a tender, loving picture that’s fascinatingly honest about parenthood. Robert De Niro should make more films like it. 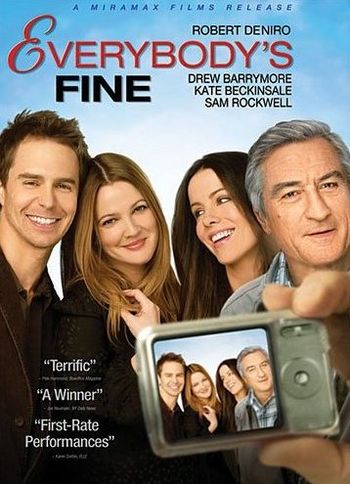