Blu-ray Review - The House of the Devil

“House of the Devil” is a throwback horror film that actually makes an effort to look and sound like a bygone era. Granted, 1980’s genre nostalgia is nothing cinematically revolutionary, perhaps even tiresome cliché at this point, but writer/director Ti West keeps to the task at hand. Forgoing irony or vile retro winks, “Devil” plays it straight. While that doesn’t generate the most riveting suspense piece of the year, it does deliver a hugely satisfying chiller that’s effectively minimal and marvelously made.

Hoping for an apartment of her own, college student Samantha (Jocelin Donahue) can’t quite come up with the first month’s rent, drowning her sorrows in pizza with mouthy best friend Megan (Greta Gerwig). Spotting a help wanted flyer for a babysitter on campus, Samantha makes a call to Mr. Ulman (Tom Noonan), who desperately needs assistance as soon as possible, throwing piles of cash in front of Samantha to help secure her services. Arriving at Mr. Ulman’s eerie rural home, Samantha learns it’s not children she’s been hired to care for. While Mr. and Mrs. Ulman (Mary Woronov) are off to catch a lunar eclipse, the young caretaker slowly realizes she’s in grave danger, threatened by insidious forces.

A low-budget horror film, “Devil” is best appreciated for its filmmaking textures. Shot on 16mm and teeming with little touches of the era, the picture stays mindful of its homage, creating a feature film that, with some necessary squinting, looks authentically pulled from the vaults of terror. Costume design, hair styles, photography, and art direction create a specific time and place, which helps the film to sell its macabre grip. Even if “Devil” doesn’t quite pull off its magic trick in the end, West has constructed an immersive event, taking the viewer to a more menacing, less belligerent mood of horror. At the very least, “Devil” is a great opportunity to soak up some atmosphere. 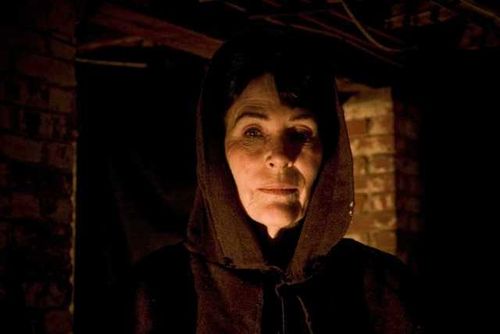 The plague of devil worship forms the foundation of the picture, with an opening text warning how Satanism was a major event in the ‘80s, with some suggesting a massive government cover up was employed to keep the panic contained. Perhaps trying to pass the film off as truth isn’t the best method of madness for West, since “Devil” is far more effective as a bottom-shelf chiller, not a public service announcement. It’s a curious start to a rather static enterprise of suspense. “Devil” is evocative, but hardly furious, spending much of the running time following Samantha’s exploration of the Ulman home. West doesn’t squeeze the senses here, only drumming up a few tingles and one sizable shock as our heroine discovers just what in the hell is after her. The dewy concern is earnestly expressed by Donahue, but those expecting more of a thrill ride atmosphere would be well advised to settle in while the director examines the spooky architecture.

Creepiness seeps in via Noonan and Woronov, two actors well-versed in genre manipulation and, in the case of Noonan, bring along a demonic physical carriage that could curl hair. The final act pays off the tension with a superior burst of ghoulish violence and arterial spray, with West even making the bliss of eating pizza worrisome.

The AVC encoded image (1.78:1 aspect ratio) here nicely supports the low-budget, 16mm essence of the ‘80s that director Ti West is aiming for. We’re talking grain, baby, and it looks excellent on the BD, creating a suitable texture to the cinematography that encourages detail and evokes a generously threatening mood. Shadow detail is consistent, remaining fresh while the action reaches some impossibly dark situations for Samantha, while colors sustain a pleasing punch in retro locations and moments of bloodshed (reds are an exceptional force). Facial detail is also a plus, though the BD does reveal a few of the production’s technical limitations. Overall, it’s a satisfying looking visual experience for a picture attempting something special.

The DTS-MA 5.1 sound mix has an abundance of mood to sort through here, supporting the visual element with a hearty horror event that increases the creepy vibe tenfold. Soundtrack selections are smartly pronounced while scores cues find the proper, fully formed edge. Sound effects are the big draw here, with a wonderful arrangement of surround jolts and hostile atmospherics, matched well with crisp dialogue exchanges. Even silence has a presence here, wickedly proportioned for maximum suspense reveal. 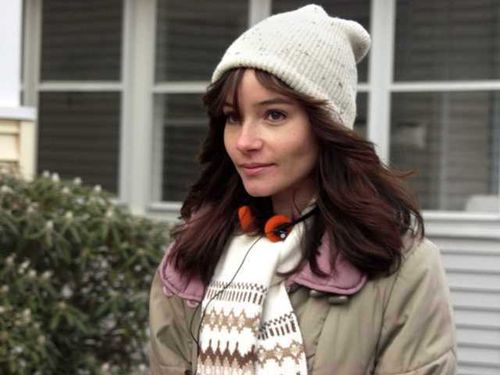 The feature-length audio commentary with writer/director Ti West and star Jocelin Donahue takes some time to warm up, with the filmmaker coming off a little unprepared for such an extended conversation. Thankfully, the pair finds their footing quickly, giving a praise-heavy commentary filled with fascinating tidbits about the shoot. West dominates the track, and while his Spicoliesque demeanor can be wearisome at times, he does a fine job conveying the specific intent of his film, while Donahue helps to jog his memory. My favorite conversations here involve memories of the house, which was apparently infested with ladybugs to a distracting degree. When I think of this house of evil from now on, I will think of ladybugs.

A second commentary with West, sound designer Graham Reznick, and producers Larry Fessenden and Peter Phok is more technical in nature, while covering basically the same ground as the first track. Only now the info is delivered in a more relaxed, men’s club mood.

“Deleted Scenes” (6:42) are interesting, as two of these excised moments are uncut takes of a single scene; a moment that West admits tickled him on the commentary. A third is a simple bit of ghoulish business.

“In the House of the Devil” (13:34) is gloriously concerned with BTS footage, taking a fly-on-the-wall approach to understanding how the “Devil” production machine moved through the shoot. Nothing’s underlined here, which is wonderful, permitting a you-are-there feeling as West rallies the troops through chilly temps, creepy houses, and late nights.

“Behind The House of the Devil” (4:40) is a brief promotional stop that’s more interview intensive than the other featurette on the BD. It’s nice to hear cast and crew thoughts streamlined and glazed, but it’s all over the moment it gets going.

“Devil” is generously unassuming, making the film more of a secret handshake than a blood-spattered, deafening gorefest. The attention to mood and setting is marvelous. Even if “House of the Devil” has trouble getting out of first gear, it’s always a pleasure to watch. 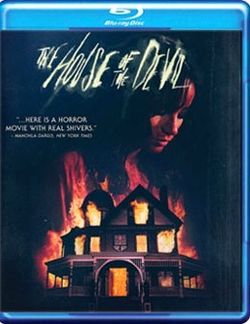