There’s a power of mimicry and lavish flight photography that keeps the bio-pic “Amelia” in the air. This is not a strong motion picture, nor a particularly informative one. Instead, it’s a finely polished soap opera from a wonderful director starring fantastic actors, and nobody can quite connect the ambition of the piece with the execution. Moments of midair ecstasy hold it together and without those peaceful pauses of expression, “Amelia” is simply mawkish entertainment, stable and worthwhile for the uncommitted moviewatcher, but it never finds a comfortable altitude.

Ever since her childhood in Kansas, Amelia Earhart (Hilary Swank) wanted to fly. Using the publicity skills of publisher George Putnam (Richard Gere), Amelia found fame as a passenger on a 1928 transatlantic flight, catapulting her name into the history books. But Amelia wanted her own glory. Eventually marrying Putnam, the couple built Amelia into a brand name, sending her into the skies and on the lecture circuit, even finding a romantic dalliance with admirer Gene Vidal (Ewan McGregor) along the way. Against Putnam’s wishes, the ambitious pilot desired a transatlantic solo flight, eventually looking to take on the impossible: a flight around the world. With navigator Fred Noonan (Christopher Eccleston) in tow, Amelia took off in 1937, sailing into the skies for the last time.

I suppose there’s some expectation for “Amelia” to focus intently on the airborne accomplishments of its heroine, seeing how her name was built on incredible leaps of skyward faith and instinct. It certainly came as a surprise to me to see that the film isn’t always interested in Amelia’s gifts, but her bedroom proclivities as well. Director Mira Nair searches to unearth Amelia’s heart, investigating the passions that found her bouncing between men as she craved freedom from limitation. It seems Amelia wasn’t always driven by honor, more often pushed into opportunity by the men who attempted to run her life. 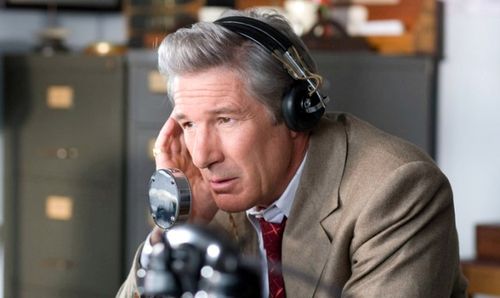 Nair handles the domestic disturbance with heavy melodramatic hands, pressing Gere and Swank into a heightened state of emotion, keeping in line with the cinematic offerings of the era. The homage is clear, but the delivery is trying, especially under the tight bondage of the film’s PG rating. The picture depicts Amelia Earhart as a bisexual adulteress with a soaring heart, easily susceptible to male control. Nair handles the subplot cautiously, but it feels distracting, especially placed next to the aviation material, where the film’s heart truly lies.

Wielding exaggerated accents (Gere’s comes and goes), the leads fail to generate much heat, instead only encouraging painful pockets of overacting, trying to compete with cinematographer Stuart Dryburgh’s amazing aerial footage by broadly overstating desire. The performances are awkward, made worse by Nair’s indecision, caught between Amelia’s legacy, built through endorsements and media curiosity, and her innate need to be in the air. The two elements of her personality never gel properly into a convincing feature.

I’ll give Nair this, she does make history exciting again. The final act, where Amelia’s fate is sealed somewhere over the Pacific, is a harrowing sequence of miscommunication and acceptance, generating astounding tension. Here, the merging of wonder and panic creates a strong brew of suspense, taking a conclusion widely documented and making it feel sickening all over again. “Amelia” could’ve used more of this inspired manipulation.

The AVC encoded image (2.35:1 aspect ratio) on this Blu-ray feels slightly overprocessed at times, but the majority of the presentation captures the serenity of the cinematography. Colors are outstanding, lush and distinct, with cherry lips and blue skies jumping right off the screen. Detail is also superb, offering up the period ornamentation for scrutiny while allowing for a careful survey of Swank’s make-up overhaul to make her resemble Amelia. This newfound clarity is has its advantages and disadvantages. Aerial footage is gorgeous, evocative, and crisp, and shadow detail is passably solid.

The DTS-HD 5.1 mix for “Amelia” sticks with warm, romantic tones that rarely overwork system capabilities. Dialogue is clean and easily understood, meshed well with the ambitious scoring cues that do their best to fill the audio experience, supporting the picture with sweeping orchestral movements. Plane sequences are nicely balanced between cockpit claustrophobia and airborne tranquility, with mechanical atmospherics providing a believable surround environment. LFE has its moments with storms and accidents, while period recreations retain an appropriate thin, chirpy quality. 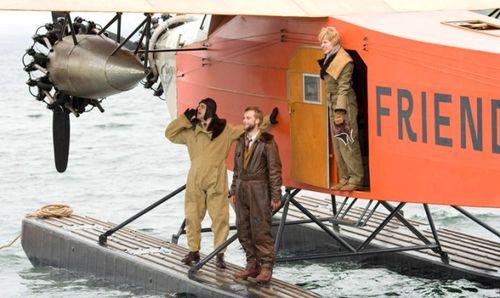 “Deleted Scenes” (13:52) restore pieces of Amelia’s personal life chopped out of the film, but the major revelation here is a supporting turn from Virginia Madsen, here playing Putnam’s distressed wife. A needed section of the story crudely cut out to simplify loyalties, the scenes are a bit disorientating out of context. Also included is a lovely montage of flight footage.

“Making Amelia” (23:06) is the picture’s BTS featurette, created for cable. It’s a glossy, compacted bit of business, with cast and crew interviews discussing their interest in Amelia’s story, working under Nair, and how they hoped for a bit of realism to the tale. It’s brief, but educational, covering a lot of ground in a compacted amount of time.

“The Power of Amelia Earhart” (10:45) is focused more on celebrating the aviatrix’s achievement as a force of feminist might and how she inspired the cast and crew with her ambition. It’s somewhat bizarre to hear so many discussing her historical value, yet the film they made about Amelia seems bent on reducing her legacy. Odd.

“The Plane Behind the Legend” (4:33) showcases the hunt for the Electra, which led to collector Bernard Chabbert, who brought his beloved aircraft to South Africa for the film shoot.

“Movietone News” (6:41) is perhaps the most interesting supplement on the BD: actual newsreel footage of Amelia Earhart in action, promoting herself and chatting with reporters after her aerial feats. Swank’s performance is certainly more appreciable after watching these moments in time.

After a viewing, I tried to assess what I learned about Amelia over the course of the feature. What the film offers is melodrama, more interested in the aviatrix’s bedroom activities than her spirit. The picture doesn’t track her heroism or her elevated determination, soon reflected in the eyes of millions of impressionable young women. “Amelia” hunts for complexity, but it only achieves a tedious middle ground. Amelia Earhart left behind an amazing legacy of accomplishments and exited the world creating one of history’s most enduring mysteries. Her story is a mighty creature, but “Amelia” can only muster a dull roar. 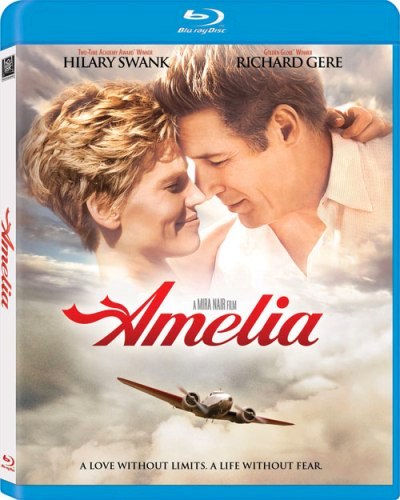