Cynicism is a major component of “Wonderful World,” detailing how it can hold a life back from the smaller pleasures of the universe, offering false comfort to those less openhearted. It’s a mood exhaled into “Wonderful World” with overwhelming vigor at times, capturing the curdled nature of the lead character with unnerving accuracy. For this alone, the picture deserves a look. Perhaps not the strongest, most refined offering of drama for the new year, “Wonderful World” digs up a few choice moments of behavioral authenticity to make a lasting impression.

Ben Singer (Matthew Broderick) was a once mighty force in the world of youth entertainment, finding his music career shut down by the greedy side of the business. Now a legal proofreader trying to stay involved in the life of his pre-teen daughter (Jodelle Ferland), Ben finds comfort in the friendship formed with his Senegalese roommate, Ibu (a wonderfully soulful turn by Michael K. Williams). When Ibu falls into a diabetic coma, his sister Khadi (Sanaa Lathan) arrives from Africa for support, infiltrating Ben’s bleak worldview with her foreign optimism and rural wisdom. The two soon strike up a relationship, which challenges Ben’s passion for discomfort, opening him up to the possibly of a life lived with a sliver of hope.

Written and directed by Joshua Goldin (amazingly, the co-screenwriter of “Darkman” and Broderick’s 1992 flop, “Out on a Limb”), “Wonderful World” is a reserved, lightweight picture that assumes the rather bulky weight of pessimism. Ben’s world is one in constant combat with “The Man” (played by Philip Baker Hall), who often visits the cynic during his dreams to remind the schlub who truly controls the weight of the world, pressing down harder on his despondency. Ben is miserable, burned long ago by an industry he trusted, resigned to a life where manipulation and corruption is found everywhere he looks, poisoning his relationships with loved ones.

Goldin sustains this dread vividly throughout most of “Wonderful World,” employing Broderick’s gift for conveying convincing melancholy to terrific use. The picture isn’t a depressing sit, but it does touch on a reality of contempt that feels uncomfortably authentic. For the first half, Goldin scripts an engrossing journey of depression for Ben that flows naturally, building the character as a plausible curmudgeon who wants nothing from his fellow man. For 45 minutes, “Wonderful World” shoots straight and constructs an atmosphere of social objection that’s digestible and, frankly, sometimes easy to agree with.

Once Khadi enters the picture, the script takes a few sharp turns toward redemption that feel rushed, though Lathan’s performance is relaxed and brings around interesting chemistry with Broderick. Still, melodrama soon floods into the proceedings and Goldin gets grabby with character arcs, looking to tie together altered worldviews in only a few clunky moves. The short running time (85 minutes) is appreciated, but “Wonderful World” reaches beyond its grasp in the second half, bursting the compelling mood it was building with such clear-eyed direction.

It takes some digging, but there are a few nuggets of emotional clarity within “Wonderful World” that makes it worth a sit, along with the chance to spy a nice ensemble of actors able to nudge some life into Goldin’s screenplay. The switch from gloom to hope is jarring, but the messages of community appreciation and self-worth are humane and worth the moviegoing time invested. 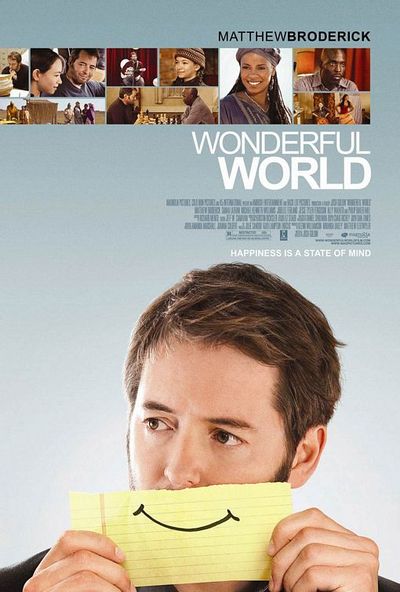