Film Review - The Loss of a Teardrop Diamond

Playwright Tennessee Williams could never be accused of subtlety, building a historic, adored career on the wings of southern-kissed hysteria, often pitched to the rafters. “The Loss of a Teardrop Diamond” has been described as a “long-lost” project, scripted by Williams while riding the waves of success that followed his “A Streetcar Named Desire” triumph. It should’ve stayed lost. A rambling, zombified pass at Williams-certified melodrama, the film is an absolute chore to finish, even while boasting a few fine performances and the luscious humidity of 1920’s southern comfort.

Fisher Willow (Bryce Dallas Howard) is a socialite without a proper muzzle. Fearful of facing the year’s calendar of parties alone, Fisher enlists the help of Jimmy (Chris Evans), a handsome farm hand burdened with an alcoholic father (a typecast Will Patton) and a mentally ill mother. Handed fancy clothes and keys to a fine automobile, Jimmy and Fisher hit the circuit, though it’s clear that the young lady’s need for an escort extends beyond mere social obligation. While attending a crucial Halloween party, drama ensues when Fisher loses an expensive earring, turning the peaceful event upside down through accusations, misplaced affection, and the sobering misery of a dying matriarch (Ellen Burstyn).

“The Loss of a Teardrop Diamond” won’t threaten the celebrated legacy of Tennessee Williams, but it sure won’t help it either. A labored, robotically manufactured bit of writing, the screenplay is shamefully repetitive, falling well beneath the standards of verbal elegance that normally accompanies the playwright’s work. An aborted script, left for dead over 50 years ago, it’s strange that actress-turned-director Jodie Markel would feel so passionate, so bloated with ambition, that she would make the effort to restore to the screen a piece of drama that was rightfully ditched in the first place.

While the picture encourages a battery of complaints, I suppose the top concern that comes to mind is simply: why all this effort on characters that offer little in the way of sympathy, dimension, or common sense? Written in a very theatrical style with blustery monologues, brutally timed pauses, and field goal opportunities for teary grandstanding, "Teardrop Diamond” is insufferably wooden. It dramatizes the passions of people unworthy of such examination, lingering on emotional pain that’s rarely expressed in manner other than screechingly superficial. Markel doesn’t help the cause with her stage-bound framing and lighting cues, seeming fearful to disturb Williams’s solidified characterizations while the film begs for any drop of human behavior. It’s a film trapped in amber, reflecting the time in which it was conceived, refusing a needed upgrade in flexibility to match modern acting limitations and directorial ambition.

Though the material is difficult for her to swallow, I admired Howard’s performance as Fisher. Plunging headlong into Williams’s “mad heroine” routine, Howard is all sparkles and mile-long drawl, doing what she can to meter the character’s histrionics. When the action moves to the Halloween party, which eats up nearly half of the film, Howard assumes the role of a life preserver, remaining the only compelling thespian presence while Evans flubs his reactions and Burstyn chews some serious scenery. The second half of “Teardrop Diamond” is a glacial slog through class warfare, sexual impropriety, and more monologues, leaving me forever grateful to Howard and her ability to capture and process a personality Markel felt too precious to manipulate beyond the screenplay’s broad outline.

In the end, tears flow and compromised destinies are locked into place, and there’s no reason to give a damn about any of it. 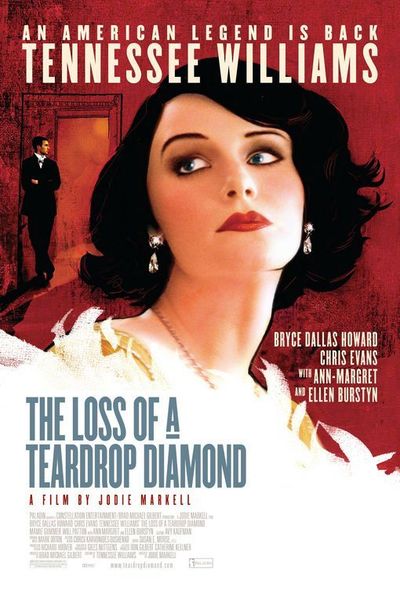