I’m genuinely flummoxed by “Smokin’ Aces 2: Assassins’ Ball.” A no-budget DTV prequel, the picture is purely a rehash of Joe Carnahan’s 2007 action fiesta, only this gratuitous do-over has been stripped of star power, peppered with rotten special effects, and gifted a moldy Bush Jr.-era storyline that falls below whatever potential was there for a return to the “Smokin’ Aces” universe. Co-hatched and executive produced by Carnahan himself, the filmmaker should hang his head in shame over this cut-rate, slapdash cash-in. It’s a ghastly, embarrassing motion picture.

Walter Weed (Tom Berenger) is a physically disabled F.B.I. bureaucrat who’s found himself an assassination target with little understanding as to why. With a crack team of agents as his protection, Weed is relocated to a secure bunker located underneath a jazz club. As the target time for Weed’s murder approaches, assassins from all over the world line up to claim the multi-million-dollar prize, including brute Finbar McTeague (Vinnie Jones), smoldering Ariella Martinez (Martha Higareda), master of disguise Lazlo Soot (Tommy Flanagan), and the nutso Tremor Family (including Michael Parks and Autumn Reeser). However, for Agent Baker (Clayne Crawford), pieces of the Weed puzzle aren’t making sense, leaving him only moments to figure out loyalties and enemies before the bullet parade begins. 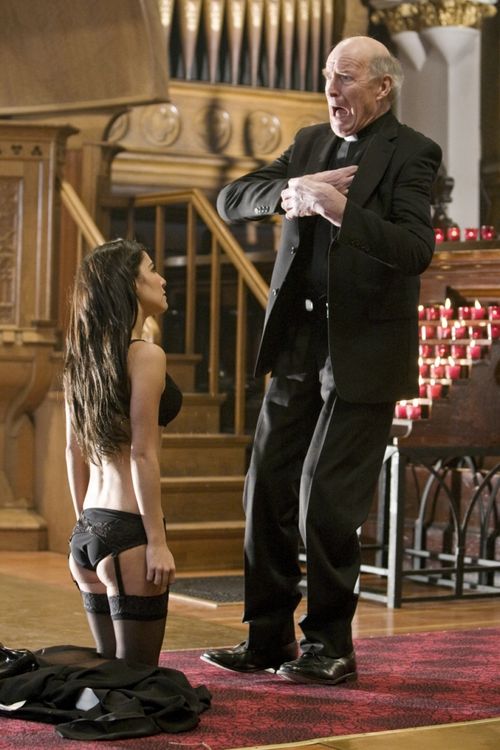 I delighted (against all odds, I might add) in the original “Smokin’ Aces.” Carnahan’s shock treatment direction and assembly of A and B-list actors helped immensely to comfortably digest the double-crossing, rapid-fire malarkey he was shoveling. It was an imperfect picture but nevertheless a convincing collision of chaos, properly manipulated with swell velocity of violence. “Assassins’ Ball” is a charmless, amateur facsimile, eager to appeal to admirers of the original film by reheating elements that just barely clicked the first time around.

While Carnahan doesn’t exactly take a scripting credit (only a story claim), “Assassins’ Ball” merely traces from his first film, again dreaming up a protected mark (with a taste for card tricks) facing a date with death from a horde of willing executioners. While I understand “Smokin’ Aces” wasn’t universally beloved, it at least fought for filmic qualities. The prequel is a greenscreen-addicted, HD quickie messily excreted from director P.J. Pesce, a semi-famous wrangler of crummy bottom-shelf continuations (“Sniper 3,” “Lost Boys: The Tribe,” “From Dusk Till Dawn 3”). “Assassins’ Ball” looks as though it was paid for with the crew’s milk money; from the cast of nobodies to the horrendous visual effects (the kind that feature massive explosions left and right, but no physical damage to the set), the prequel can’t seem to cover for its lack of budget. Pesce just isn’t a filmmaker blessed with magical powers of persuasion or even a sparkle of Z-movie gusto, leaving “Assassins’ Ball” a dreary, derivative bore. Yes, a bore. Carnahan worked overtime to make sure yawns were outlawed. Pesce practically fluffs your pillow. 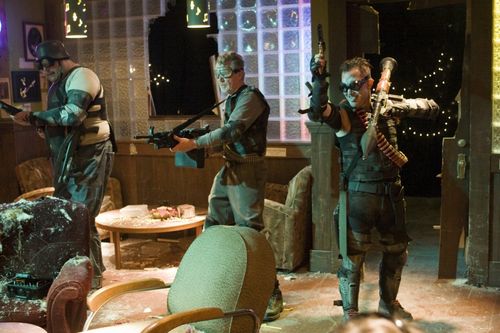 “Smokin’ Aces” was a harsh cartoon, but a lively sense of gallows humor permeated the slick visual sheen. The prequel dashes for the same irreverence, overdosing on shtick to make a sizable small-screen impression. Yes, there’s plenty of bloodshed and quips, but the material is decidedly mean-spirited to support a macabre sense of merriment. Also returning is the Tremor clan, the wild Neo-Nazi brutes who employ anarchy as their secret weapon. For this film they’re armed with a circus cannon and bomb-laden clowns, firing upon the good guys with this comedic weapon, setting the bar of actual laughs as low to the ground as possible. Heck, the bar’s lying on the ground as far as I’m concerned. The Tremors were an interesting gimmick in the original picture because of their unpredictable, shrieking madness. For the prequel, the rebel yell’s gone hoarse.

“Smokin’ Aces 2: Assassins’ Ball” is stupefyingly dull, unintentionally hilarious, and woefully inept when it comes time to pay off the big, bad killer showdown. Calling the picture unnecessary doesn’t quite cover the uselessness of the production. This is a terrible motion picture, a slap in the face of the previous film, and an unforgivable waste of chintzy artificial explosions. 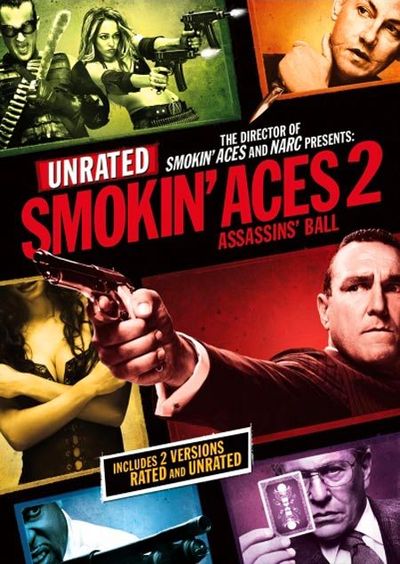 Its a shame that the name of "Smoking Aces" is used on this movie, this is more comedy type movie than a Sycopathic Merc Vs. Bounty Vs. FBI movie (the original one), its like an big scam... I hoped that they'll made a master pice like the original one, but this is not... I hope for an Smoking Aces Movie that for real can BE BETTER THAT THE ORIGINAL MOVIE...