The Swedish/Norwegian fantasy feature “Ronia, The Robber’s Daughter” is one of the strangest family films that I’ve come across in recent memory. Steadfastly refusing any type of narrative momentum, “Daughter” prefers to live in the moment, conjuring a storybook mood through extreme bouts of stasis, wallowing in the natural splendor of the locations and delighting in the expressive faces of the eclectic cast. At 140 minutes, “Daughter” is an acquired taste, leaving me to wonder why, 25 years after its original release, the picture has amassed a loyal following and loopy reputation as a wholesome moviegoing event for the entire family.

High up in a secluded stronghold lives Mattis (Borje Ahlstedst),who leads a band of thieves that spend their summers picking off easy royal targets who dare to cross into the local forests. Into the kingdom of Mattis comes beloved daughter Ronia (Hanna Zetterberg, who went from a single acting gig to politics), raised to appreciate the harsh seasons of the land, warmly buffered from the outside world by a community of rapscallions. Drawn to Birk (Dan Hafstrom), the youngest child of a rival family, adolescent Ronia finds love, while her taste for adventure leads her into lands of trolls and gnomes, with the sky guarded by an army of villainous, screeching harpies waiting for the perfect moment to strike. Fearing their affection won’t be accepted by their stubborn fathers, Ronia and Birk take to an abandoned bear cave, hoping to make a life for themselves beyond the reach of family. 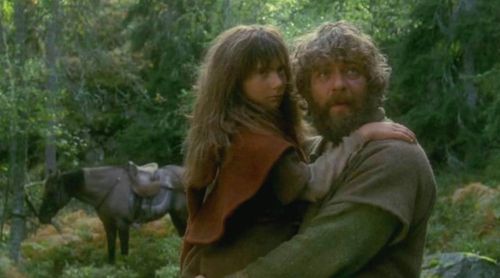 For the record, it’s not that I disliked “Daughter.” I’m simply baffled by several elements of the finished picture and its cherished status as a holiday perennial. Adapted from the dearly loved book from author Astrid Lindgren (who also scripts), “Daughter” evokes a magical medieval period of naturalistic splendor and primal emotional outbursts. It’s not a lively film by any means, but director Tage Danielsson shows an appealing passion for his Nordic surroundings, bathing the film in lush forests, dew-laden mornings, and, when the seasons cruelly shift, the chilling prison of snow. “Daughter” is a dazzling film that takes full advantage of the expansive Swedish landscape, presenting Ronia with a proper stomping ground of peaceful familiarity, forbidding mystery, and never-ending hardship. The film’s three cinematographers treat the screenplay with a touching respect, capturing genuine woodsy wonder while keeping true to the dog-eared storybook inclinations of the project. In the visual department, the picture is seamless. Technically flawless.

In his dogged attempt to preserve Lindgren’s written flair, Danielsson tends to linger more than guide “Daughter” to striking dramatic heights. The film is more of a mood piece than a stimulating bout of fantasy, with scenes more interested in gulping down fits of temper rather than awakening the threadbare plot. Mattis and his clan are castle-bound for a majority of the picture, and the director wants the audience to feel that isolation and semi-madness, which gives Ronia a proper motivation to ditch the ‘rents for good, but ends up extending the picture beyond any reasonable comfort level. Moments of comedy sputter, booze-soaked sing-alongs are insufferable, and wacky castle antics are drawn out past their expiration date. It’s clear where “Daughter” is aiming, but Danielsson’s storytelling judgment is fogged by his agonizing attention to detail. With so much European whimsy clanging around, mugging for the camera, I was stunned to find myself so utterly impatient with the feature, frustrated by its tiresome heel-dragging attitude. 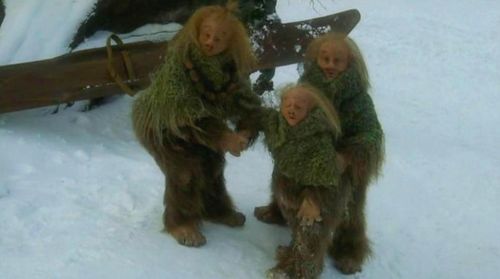 The performances are wholly committed all around (heavily bearded Ahlstedst has the sort of scene-chewing presence that suggests he might actually consume his on-screen daughter, not protect her from harm), and 11-year-old Zetterberg makes for a fine unshowered troublemaker: a girl who enjoys a good spring yell, has never encountered the liberation of a hairbrush, and is generally guided solely by curiosity, not her sound judgment. The ensemble helps Danielsson to more broadly demonstrative heights, occasionally disrobing to devour nature’s plentiful feast (leading to plenty uncomfortable twists and turns from blindsided parents during the screening I attended -- worth the price of admission alone), with Zetterberg and Hafstrom submitting nicely unrefined work as the youngsters battling warring families, the initial stirs of romantic butterflies, and the unforgiving elements as they forge their own way in the world.

Released the same year as the seminal German visual bonanza, “The Neverending Story,” “Daughter” takes a similar route of fantasy filmmaking when it comes to communicating the imaginary fringes of Lindgren’s world. Mixing puppetry, trick photography, touches of early CG animation (giving aerial life to the waves of cawing, horrifying, bare-breasted(!) harpies that threaten our heroes), miniatures, and some good old-fashioned sleight of hand, “Daughter” has more than a few sequences of amusing optical deception, though the heightened reality never sticks around as long as it should. Danielsson has a good thing going on when the film shovels in special effects, but the stagnant atmosphere of the picture tends to choke the entertainment value out of these technical flights of Nordic fantasy. 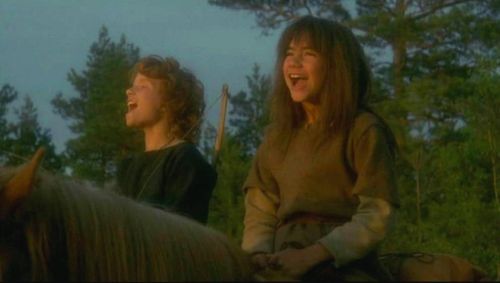 “Ronia, The Robber’s Daughter” is innocent fun, more consumed with articulating a relaxed tone of discontent than pushing forward as high adventure. The lethargy saps away the joy, but what remains is an intriguing mix of mid-1980’s brainstorming and storybook intention, packaged in an odd jewel box of mid-tempo delights and European filmmaking tolerance. I’m not sure I’d urge families to see it or consider the feature a Holiday mainstay, but it’s a sporadically convincing fable, and it does a masterful job of selling the Swedish countryside as heaven on Earth.