A fantastic symphony of characters making poor decisions, “Fish Tank” is a depiction of innocence lost, set against a common backdrop of working-class England, with its claustrophobic habitats and perpetual ambiance of hostility. It’s a dynamite film, but I was caught watching with eyes-through-fingers a few times, fearful moments of exquisite tension would devolve into a Catherine Breillat-style shock-value spectacle. Thankfully, director Andrea Arnold has better taste, making her feature not a depressive cage, but a maze of behavioral patterns and damage with some form of light at the end of the tunnel.

15-year-old Mia (Katie Jarvis) is a lost girl struggling with her negligent mother Joanne (Kierston Wareing), a filthy home, and the images of hip-hop dancing salvation force fed to her through television. Into the family comes Connor (Michael Fassbender, “Inglourious Basterds”), Joanne’s latest fling, who takes a shine to Mia and her prickly disposition. Mia, curious about the attention, becomes infatuated with Connor, unsure how to process her newfound sexual response. Though she stumbles upon a friend in age-appropriate Billy (Harry Treadaway), Mia finds Connor’s advances more persuasive, putting her in yet another precarious situation while the rest of her life continues to slip out of control.

Though not quite as feral as the 1999 Palme d’Or winner “Rosetta,” “Fish Tank” submits a similar sort of impetuous, teenaged, hand-held screen energy, tracking an unpredictable character as she maneuvers through a series of obstacles while trapped in an impossible economic situation. The setting here is England and its lost generation: a track-suited teen nation raised on lousy American hip-hop, unobtainable displays of extravagance found on television, and brimming with chipped-tooth discontent brought on by easily attained alcohol and an absence of parental interest. We’ve been here before, but the general hold of sympathetic study in Arnold’s direction is riveting, taking the audience into areas of conduct that are uncomfortable to watch, yet vital to the overall understanding of Mia and her well-oiled rage. 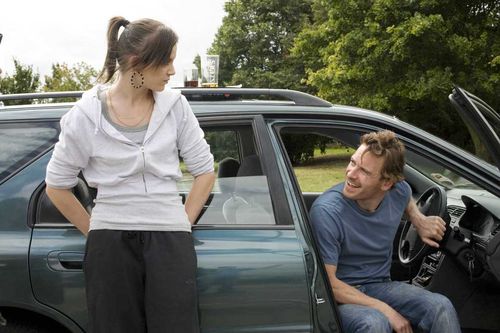 “Fish Tank” is a generally silent, semi-verite journey that follows Mia as she stomps around her community, put off by her peers as she pieces together a dream for a better life. Her golden ticket out of town is dance, which she practices inside an abandoned apartment, worried to reveal her passion for fear it will be taken away. She picks fights with the locals girls, and grows fixated on a horse chained in Billy’s yard -- a symbolic figure of forecast that Mia takes to heart. She’s a complicated girl with wrath as her one and only exterior speed, yet Connor brings something out of her that’s rarely allowed the light of day: vulnerability. However, he’s a predator of unknown origins, with Arnold plucking a devastating string of tension pulled taught between them; it’s an unnerving sexual energy the picture plays superbly without feeling the need to be lascivious about it. It’s a fresh sensation of curiosity and urge handed to a bewildered Mia, whose only role model appears to be Joanne, a boozy, easy blonde who looks roughly 10 years older than her daughter.

“Fish Tank” visits bleak psychological spaces, and while it’s a good 15 minutes too long, the lasting effect of the film is felt vividly through Jarvis’s raw performance. She’s a caustically metered, wide-eyed observer that acts as the ideal glue for Arnold as the director assembles the chilling pieces of this shattered household together. It’s a pungent display of teenage life, but “Fish Tank” achieves sublime emotional candor, gripping tightly with an electric cinematic hold. It makes the unthinkable captivating.