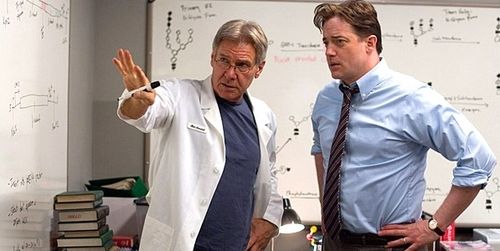 “Extraordinary Measures” is the inaugural motion picture for CBS Films, which is an apt studio home, considering the feature plays much like a broad television production, with a soft trickling of sentimentality and a structure that pauses for commercial breaks. It’s a frivolous disease-of-the-week picture, but sufficiently intriguing, even taking on a startling perspective in the war of do-gooder science vs. vampiric pharmaceutical industry profit.

John Crowley (Brendan Fraser) is a harried businessman and father of two children stricken with Pompe disease, an affliction of muscle deterioration with an age expectancy of nine years. With critical birthdays on the horizon, Crowley decides to take a chance and pursue research scientist Robert Stonehill (Harrison Ford), a renegade thinker in the field of Pompe with radical ideas on enzyme therapy. Promising money he doesn’t necessarily have, Crowley talks Stonehill into a business venture, pushing the irascible scientist into research while he worries about the cash flow. With the clock ticking, Stonehill presents challenging theories, piquing the interest of pharmaceutical giants, who demand results practically overnight. With Stonehill feeling the heat during this demoralizing process, Crowley fights to maintain the face of Pompe, to keep the cure from becoming just another compromised drug on the market. 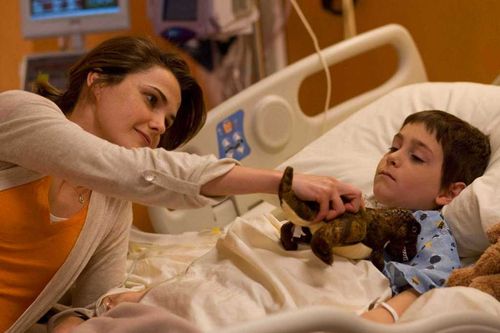 Based on a true story (from the book, “The Cure,” by Geeta Anand), “Extraordinary Measures” seems almost retro in its gentle approach. It’s a medical drama with a human slant, engorged by director Tom Vaughn (he of the reprehensible “What Happens in Vegas”) to a friendly melodramatic tempo, making for a comforting matinee diversion. There are no extreme acts of violence, swearing is more decorative than punishing, and Pompe is depicted with a firm hand of respect, offering center stage to a medical situation that’s never received this sort of spotlight. “Extraordinary Measures” is safe and ready for consumption, and while that’s traditionally a recipe for mediocrity, the film avoids a severe case of the blahs due to its strong casting and the introduction of some cold-blooded business world reality.

To get a Pompe drug to market, Stonehill and Crowley aren’t just combating lab trial and error, they’re also forced to play a cruel game of financial dependence. The screenplay by Robert Nelson Jacobs balances the reality of fundraising with the heated interior battles between the Pompe men; the feature ventures into the chilling arena of drug promotion, as Crowley is desperate to keep the financial engine moving forward. Crowley and Stonehill face harsh compromise and boardroom humiliations, and they find their partnership strained and theories put prematurely to the test. It’s a quest for the almighty dollar that the script doesn’t shy away from, calmly introducing the unsavory elements of drug development into the flow, providing peculiar dramatic tension from an unexpected source. 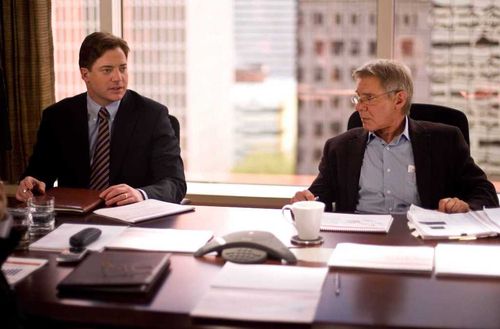 It’s not all unique storytelling challenges for “Extraordinary Measures.” The film doesn’t keep away from a few saccharine tangents with Crowley and his family (wife Aileen is played by Keri Russell), and Ford’s Stonehill is an oddly one-note character of perpetual growl. It’s a convincing performance of frustration, and Vaughn sells the stuffing out of the character’s nonconformist attitude, but Stonehill remains an emotional question mark throughout the film. It’s fantastic to see Ford in a role that bends his established screen persona, but there’s little nuance to Stonehill that encourages a closer inspection from the audience.

“Extraordinary Measures” is far from perfect, but I was pulled into the journey of the Pompe drug, from heartland hopes to the leap-of-faith test trials. It’s not a film staged in an Earth-shattering manner, merely coasting along on a gentle hum of featherweight medical and domestic urgency; it’s more pleasingly reassuring and solidly constructed than dynamic, reaching its emotional goals comfortably. 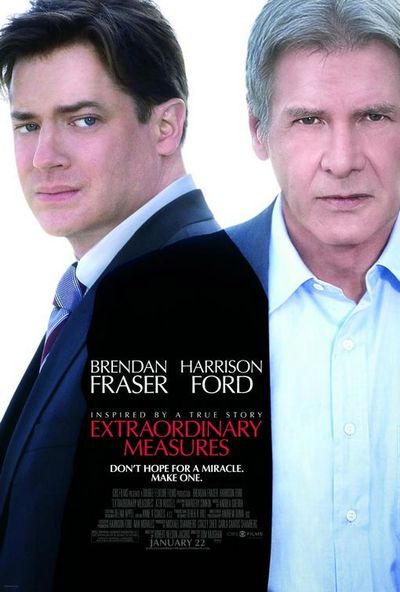