In the first reel of “District 13: Ultimatum,” we watch as one of our heroes, in the midst of tagging crime bosses left and right for arrest, must brawl his way out of a criminal lair, armed only with his martial arts skills and a rare Van Gogh painting, a masterpiece he’s trying to protect from damage. It’s a breathless, electric bout of action cinema, merging the fine art of limb-breaking with the fine art of protecting the fine arts. As sequels go, “Ultimatum” doesn’t retain the same pliability as 2004’s “District B13,” but it’s awfully easy to get lost within this crazy, Frenchified action world of parkour and gang warfare.

In the three years since Capt. Damien (Cyril Raffaelli) and Leito (David Belle) last saved the Paris criminal slum District 13, the populace has grown restless and violent toward police forces. Seizing the opportunity is Gassmann (Daniel Duvall), a presidential aide who wants the area blown to smithereens, paved over, and developed for optimal profit. Helping to kick start community mayhem by framing one of the local gangs for murder, Gassmann also attempts to bring down Damien on false charges. Keyed up, the cop calls in his old friend Leito to help investigate, reentering District 13 to help control the growing unrest, looking to channel the rage toward Gassmann’s villainous forces.

Missing from the ingredients this time around in director Pierre Morel, who went on to soaring box office heights with the Liam Neeson growler “Taken” this past year. Morel bestowed “District B13” with exceptional weightlessness, helping to bring the flexibility and surprise of parkour to the masses, backed by a silly, yet oddly compelling script that cribbed elements from “Escape from New York” to develop a French futureworld playground of peril and leaping opportunity. Producer/co-screenwriter Luc Besson brought the fun and Morel shot the bejesus out of it, making the feature a top surprise of the 2006 (its U.S. release date) filmgoing year.

Five years later, Morel has been replaced by Patrick Alessandrin, and the change dials down the jovial mood of the franchise to a noticeable extent. More a post-production knob-twirler than a commanding visual stylist, Alessandrin doesn’t contribute much dynamic energy to the film, preferring to jumble everything through edits and tinny Euro beats on the soundtrack. The lack of a directorial identity weighs down “Ultimatum,” which, opening Van Gogh assault aside, takes a good 45 minutes to really boil, with much of the initial sequences handed over for bland expositional purposes. The original film was practically in a full sprint by the starter pistol. 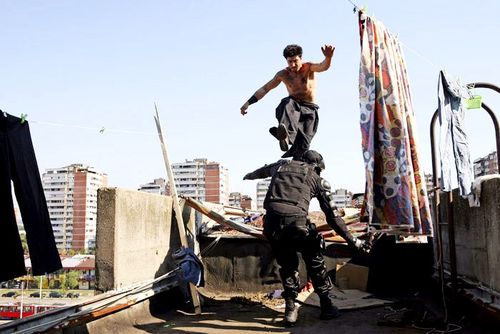 The screenplay is a featherweight story of corruption, taking a completely unexpected detour into Bush-era political commentary that seems both silly and unnecessary; perhaps Besson submitted more of an unfinished draft for filming over something polished and airtight. The story is secondary, but it takes considerable time for “Ultimatum” to come to the realization. The picture spends an eternity arranging the threat, keeping Damien and Leito apart as the villain is solidified and the plan to flatten District 13 is brought to the precipice of execution.

The payoff is a rebellion, led by Damien and Leito as they unite the various clans of the slum to wage furious war against the government. It’s here that “Ultimatum” finally slips on its dancing shoes and begins the body ballet, cranking up the action to the levels of the previous film as the two heroes team up to outwit and outbend the waves of idiotic security officers. As expected, the stunt work is first-rate, gifting the camera a splendid carnival of shattering moves that amaze and stimulate the lethargic plot, helped along by a horde of colorful, menacing characters that represent the diverse religious and cultural gangs of District 13.

Besson and Alessandrin invest heavily in the threat poised against District 13, but the real kick of the material is had when the characters are forced to fly their way out of tight situations, or reduce a team of aggressors to a heaving pile of wounded groans. “Ultimatum” isn’t the barnstorming sequel it should’ve been, but it remains an entertaining, sporadically thrilling ride. Despite the diminishing returns, I’d love to see another chapter. 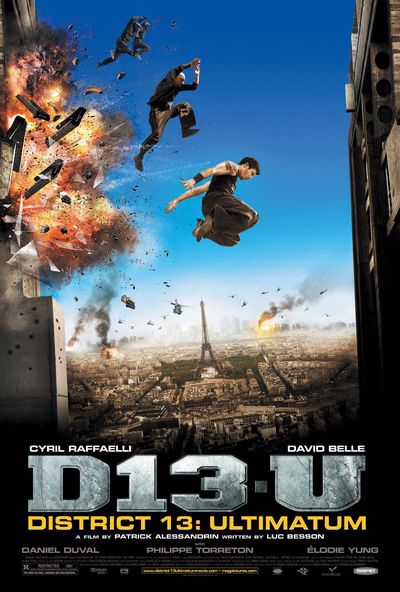