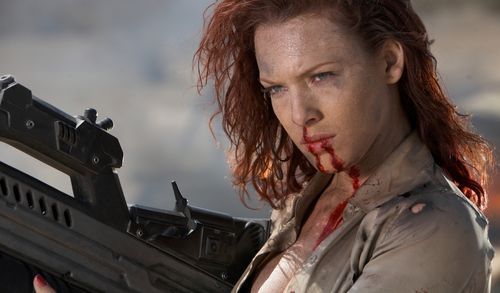 Those expecting a seamy, Vaseline-uncorked ride through exploitation cinema heaven with “Bitch Slap” might be well advised to skip this picture entirely. More of an “Austin Powers” carnival of camp with YouTube production polish, “Bitch Slap” opens with a Joseph Conrad quote and ends in a hail of bullets, leaving the midsection fairly anticlimactic and insistently silly. It’s criminal to dismiss something so utterly consumed with ample feminine assets and cross-eyed ultraviolence, but the goofball pitch of this fluff grows tiresome early in the first round, rendering the picture a splendid 10-minute short film idea stretched intolerably to 100 minutes.

Out somewhere in the desert is unknown treasure tied to criminal kingpin Cage (Michael Hurst), with vixens Hel (Erin Cummings), Camero (America Olivio), and Trixie (Julia Voth) on the run to dig up whatever’s buried deep in the sand. Faced with threat and distraction from all sides, the ladies attempt to navigate stormy waters of mistrust to take possession of the booty, finding the mounting paranoia too much to bear as their personal histories are sorted out. With the clock ticking, their skintight clothes disintegrating, and brutality all around, the trio square off in the blazing heat with quick fists and loud guns, hoping to kill off the competition and take possession of the mystery prize. 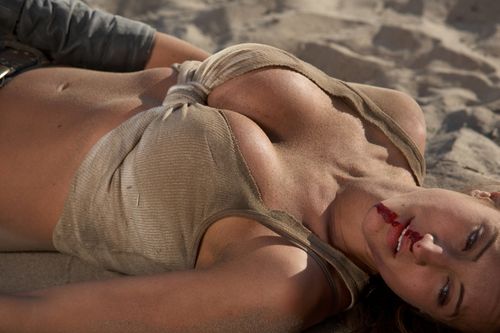 Assembling homages and filching moves from the likes of Russ Meyer, Andy Sidaris, and Larry Flynt, Rick Jacobson’s “Bitch Slap” seems like such a rollicking good time from the outside. The package tempts viewers with scantily clad women with bursting bustlines, massive weaponry, and explosive exchanges between criminal flotsam and jetsam; it’s a birthday party of sin ready to please. However, the finished product only brings eye rolls and yawns; a bizarre shock wave of indifference solidified by Jacobson’s insistence that his movie should be nothing short of a cartoon.

“Bitch Slap” is pure camp (as if the title didn’t suggest as much already), but it’s uninspired camp, swung broadly by Jacobson to cover for the film’s two-bits budget and amateur cast. Complaining about a Red Bull-gulping, funhouse tone to a film that’s 90% ogle, 10% wisecrack is an unexpected reaction, but there’s a limit to B-movie silliness and “Bitch Slap” doesn’t know when to step back and let its impish behavior exhale.

The treasure hunt takes up the central plot, while the rest of the film uses various, abrupt leaps back in time to provide the more vivid sequences of action through cheeky flashbacks, explaining how our heroines came to be. The concept is merry enough, but the entire film is riddled with an overwhelming amount of CG embellishment, along with an addiction to greenscreen that rudely pulls the rug out from under the curvy fantasy Jacobson is attempting to mount. Since the entire feature has been made on the cheap, the CG is always crude and unconvincing, pulling attention away from the important bits of jiggle and exposition. The direction is more ambitious than the budget allows, underlining the often obnoxious posture of the picture. 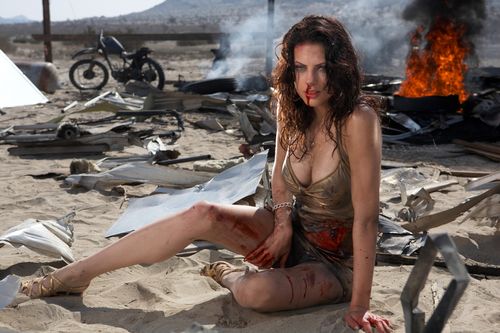 Again, “Bitch Slap” is always light and forever self-aware, which brings about some peaks of absurdity, including a wet t-shirt fight, a stripper with a glowing vagina, and an endless stream of one-liner groaners (the dialogue is purposely awful and always unfunny). The picture also assumes the role of a female empowerment machine, with an inordinate amount of attention placed on male genital trauma, just to even things up I suppose. It’s a grab-bag of Jacobson fetishes packaged together in the name of B-movie glee, but the mood is always forced, the actors severely deficient in the talent department, and the action distractingly synthetic from beginning to end.

Jacobson knows his way around glistening cleavage and bloody bullet ballets, but assembling a swift, meaningful tribute to the gods of sexploitation is something that eludes his graceless touch. He’s out to make eye candy, but the act grows stale long before the arrival of a massive, spirited Vegas shoot-out closer, mixed with a few select quotes from “The Art of War” to help with screenwriting legitimacy issues. All the revealing costumes, Penthouse Letter structure, and girl nation rumbling can’t cover the fact that “Bitch Slap” is an awesome idea handed the least effective execution possible. 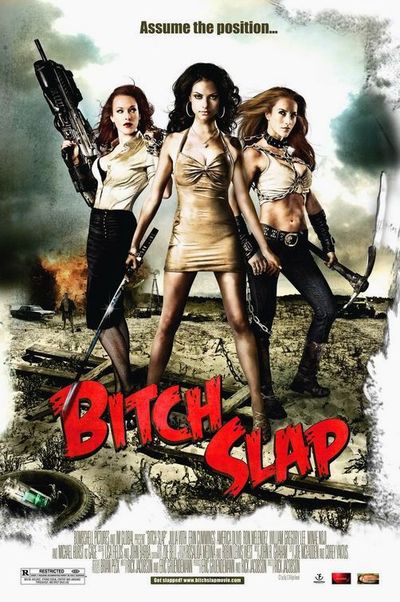