Director Jonathan Mostow has never offended me as a filmgoer. His pictures have been routinely well-constructed and visually interesting (“Terminator 3,” “U-571,” “Breakdown”), even in the face of underwhelming plots and misguided performances. “Surrogates” is undoubtedly a misfire for the filmmaker, but it’s an interesting failure, peppered with a few memorable sequences and an appropriate, timely message highlighting the acceleration of social disconnect. While ambitious, the rhythm is off on this limping picture, with hints of severe studio interference derailing the movie from the moment it starts.

In the future, society will employ the use of Surrogates, robotic avatars that are sent out into the word to conduct daily business. They are the ideal version of the user, with smooth looks and near indestructibility. When an important Surrogate is killed with a special military weapon, F.B.I. Agent Greer (Bruce Willis) is sent in to investigate. Finding the trail of clues leading to a community of human beings who choose to live life with their own flesh and blood, overseen by the influential Prophet (Ving Rhames), Agent Greer enters their forbidden city, only to watch his Surrogate destroyed. Now without his buffer to the outside world, Agent Greer is forced to interact with a menacing Surrogate population, including his estranged wife, Maggie (Rosamund Pike).

Adapted from 2006 graphic novel, “The Surrogates,” the feature film realization preserves a distinctly illustrated quality to the material, keeping a tone of page-turning mystery and flashy sci-fi discovery. It’s a handsome picture, photographed sharply and brimming with curious fantasy touches sold well by the numerous special effects, with the colorful centerpiece being the network of unnaturally perfect Surrogates. Chillingly dead-eyed machines with vivid features and silky skin, the Surrogates generate the tension and mystery of the piece, and Mostow juggles the balance between robotic advancement and emotional distance soundly, laying on the technological detachment theme thick, but effectively. When all is lost in the film (and it unravels eventually), the design and execution of the Surrogate figures remain visually stimulating to the end. 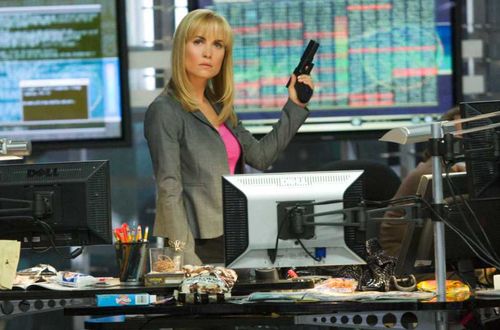 The confidential weapon capable of slaughtering Surrogates is the major question mark of the film, but the mystery surrounding the gun and its various owners is never massaged hard enough to reach critical mass. Instead the feature jumps from turn to turn, suggesting that “Surrogates” was trimmed heavily on its way to release. While filled with colorful characters with plenty on their minds, the story has been pared down to the bare essentials of action and whodunit. There’s not much room to breathe here, highlighted uncomfortably in the relationship between Greer and Maggie. A married couple unable to cope with the tragic loss of their young son, the pair has taken to Surrogacy to numb the pain. It’s a plotline that appears integral to the overall story, but all that’s left in “Surrogates” are melodramatic fragments that are poorly finessed into the film, again suggesting cold studio hands restructured the plot without Mostow’s cooperation, leaving turbulent waves of emotion behind, absent the necessary, gentle context.

The future isn’t so bright on the “Surrogates” BD. The AVC encoded image (2.40:1 aspect ratio) comes across unnaturally darkened, perhaps to help protect the seams of the visual effects. It’s not a crushing overcast, but it comes across as an artificial effort to protect something. Shadow detail is lackluster, muddying up evening sequences unnecessarily. Facial detail is satisfying (the plastic appearance of the robots is believable and pronounced), and daylight moments are quite invitingly vivid. Colors are outstanding throughout, best when replicating the neon futureworld environment.

The 5.1 DTS-MA sound mix is superb when picking up on robotic minutiae, bringing special energy to the listening event when the layers of the Surrogate world are pulled back for inspection. Action sequences kick hard in the surrounds, with aggressive LFE response adding the proper rumble to match the mayhem onscreen. I found the dialogue swallowed at times by the city sounds, but the majority of the conversations are presented cleanly. Outdoor atmospherics are heightened some to support Greer’s journey, enjoyably manipulated for further submersion. 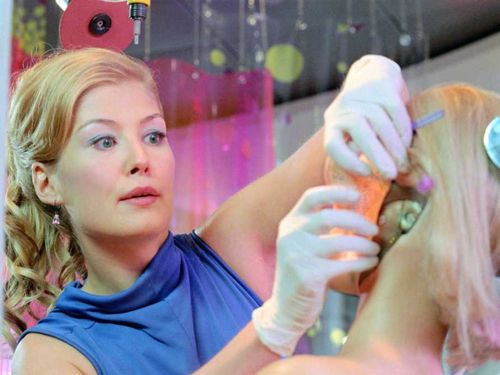 Unfortunately recorded before the film’s theatrical release, the feature-length audio commentary with Jonathan Mostow is an enthusiastic track with the filmmaker hoping to convey a sense of accomplishment with his picture. It seems the leap from comic book to the big screen wasn’t as easy as it looks, and Mostow is more than happy to point out the film’s adaptation compromises and enhancements. The director also giddily explains the massive visual effects effort to bring the Surrogates to life (800 shots and a special level of patience from the cast). It’s an informative commentary, but Mostow comes across a little desperate with his explanations, looking to head off any criticism of the final product.

“A More Perfect You: The Science of ‘Surrogates’” (14:34) attempts to bridge the fantasy of the film with the reality of robotics. Hauling in a few experts and bio-tech personalities to talk up the miracle of the machines, the featurette showcases the remarkable strides made in avatar technology, the largest leaps forward made in Japan. The more savory parts of the mini-doc come with a few glimpses of the picture’s unfinished visual effects, demonstrating the steps it took to turn Bruce Willis into a smooth Surrogate detective.

“Breaking the Frame: A Graphic Novel Comes to Life” (6:33) interviews Robert Venditti, creator of the “Surrogates” source material. With a few motion-comic moments employed to assist in the panel-to-screen comparison, the featurette is suitably educational, allowing the artists behind the graphic novel to revel in their unexpected success.

“Deleted Scenes” (6:03) are mild pieces of characterization, the best one being Greer’s interaction with a group of sneering Surrogates inside a bar. A few of these clips are presented in an unfinished state.

“‘I Will Not Bow’ Music Video” (3:49) is a performance clip from the band Breaking Benjamin. It’s awful.

Bruce Willis looks a little bored here at times and is miscast as the baffled hero. Thankfully he’s surrounded by a fine supporting cast (including Radha Mitchell and Buzz from “Home Alone” himself, Devin Ratray, here as a slob F.B.I. tech wizard) who seem to be enjoying the Surrogate fantasy and futureworld trimmings. “Surrogates” is short (85 minutes) and fails to land a killing blow that pays off the simplified mystery with any distinct urgency. It’s a flawed film, but far from unbearable. 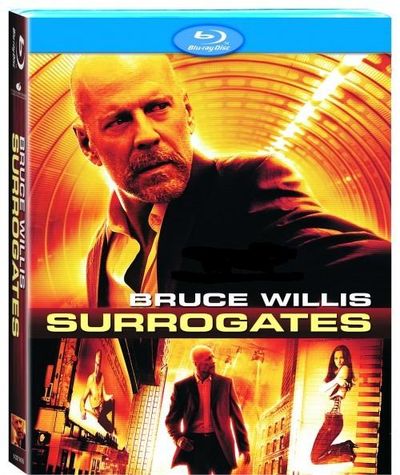 As a Bruce Willis fan I was curious about this one. He's done several less than stellar films and this looked like one of them, but after reading your review I'm sure I'd be partially entertained!