A documentary about babies? Considering the baby fever that’s seized control of the nation over the last few years, it makes sense for a pandering picture like this to see release. Tracing the growth of four babies from San Francisco, Tokyo, Namibia, and Mongolia, “Babies” is a document of development and social integration, while also representing a wellspring of cute. I’m curious to see how the doc can sustain a feature-length running time, but I’m dying to experience the cooing shock waves of response sure to fill theaters.

When Martin Scorsese makes a movie, it’s an event. He doesn’t work fast, taking up to two years to craft his motion pictures, which is why “Shutter Island” comes across as a bit of a head-scratcher at first glance. A pulpy thriller with horror overtones, “Shutter Island” is a departure for Scorsese, who brings along current wooby Leonardo DiCaprio to help ease audiences into a challenging phantom zone of spooky locales and psychotic behavior. Obviously, Scorsese being Scorsese, “Shutter Island” is going to be a memorable, supremely crafted affair of pure cinematic concentration. Even if it misfires (an unlikely event, but anything could happen), I’m positive Scorsese will provide a sumptuous buffet of filmmaking treats to devour.

The horror remake blues turn to the clawed one, Freddy Krueger. Michael Bay’s Platinum Dunes re-do production machine works over Wes Craven’s masterful “A Nightmare on Elm Street,” updating the sleep-deprived theatrics for a new generation of filmgoers, recasting the Krueger role with the former Kelly Leak, Jackie Earle Haley (an inspired choice). The trailer for this latest “Elm Street” sprint revealed hints of a straight-up remake, which is deflating, so here’s to hoping the production aims a little higher for their unnecessary picture. After all, I did enjoy the “Friday the 13th” reworking last year, but that was simply geek grunt work with a cracking sense of pace. “A Nightmare on Elm Street” is a bona fide classic, and it would kill me to see all this hard work wasted on an idiotically conceived cash-in (I’m looking your way “Texas Chainsaw Massacre”).

“Cop Out” is the new Kevin Smith film that urgently wants to conceal any connection to Kevin Smith. After the understandable failure of his lukewarm “Zack and Miri Make a Porno,” Smith’s trying on a director-for-hire vest (or bathrobe) here, assembling a Bruce Willis/Tracy Morgan buddy comedy with as few Silent Bob touches as possible. I applaud the gifted filmmaker for stepping outside his snoogans comfort zone, trying on a star vehicle for once. However, part of Smith’s appeal is his idiosyncratic touch, and with his voice lowered to a whisper on “Cop Out” (just a directing credit for Smith, no script this time out), I fear the bullet-happy, quip-quick party may not last for very long.

I’m not opposed to the idea of remaking “The Karate Kid,” I’m opposed to the idea of remaking “The Karate Kid” with Jackie Chan and Jaden Smith in the lead roles. The original film is an eternally endearing ‘80’s classic, goofy around the edges but sentimental and rousing in all the right spots. Bringing Chan’s tired goofball antics and Smith’s lousy acting into the mix doesn’t inspire the greatest confidence, and the prospect of a hip-hop/wire-fu take on this material just depresses me. I’d love to be surprised by this one, but trying to rewire a film of geek magnitude such as “The Karate Kid” seems like such a pointless endeavor. Wax-on, write-off. 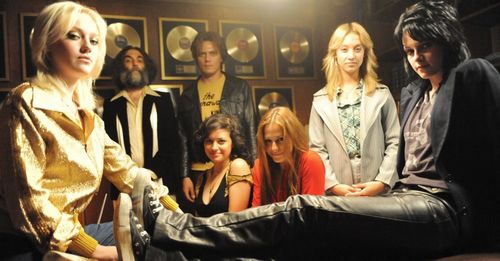 All-girl cult punkers The Runaways receive the bio-pic treatment, which immediately conjures images of snarling women in tight clothing, ready to kick the music industry in the balls. So, of course, the producers have cast Dakota Fanning and Kristen Stewart in the hardened roles of Cheri Curie and Joan Jett. Pause for laugh. “The Runaways” might amaze if it doesn’t ask the lead kewpie dolls to project wizened, mid-70’s jailbait allure, but all signs point to actors clearly out of their element. Also of concern is Jett, who takes a producing credit, all but guaranteeing a soft-pedaling of managerial abuse and the band’s interpersonal combustibility.

Seeing how I’m the only critic on Earth to find Noah Baumbach’s “Margot at the Wedding” a triumph of comedic irritability, it should come as little surprise to learn that I eagerly await the filmmaker’s follow-up, “Greenberg.” Dipping into introspective, man-boy waters, Baumbach has nabbed himself a popular leading man (Ben Stiller) to help with his box office woes, and kidnapped a few mumblecore titans (Mark Duplass and the strident Greta Gerwig) to assist with the indie cred. Baumbach’s a clever guy with a pronounced wit, and he’s certainly someone who deserves a larger audience.

Perhaps the most curious sequel of the year is “Wall Street: Money Never Sleeps.” A continuation of the 1987 Academy-Award winning hit, it seems the time is right to plunge back into the horrifying world of stock market atrocities. Michael Douglas fights back as Gordon Gekko (sans sweet slicked ‘do, cue disappointment), playing against Shia LeBeouf as an ambitious trader caught in overwhelming romantic and professional trouble. Oliver Stone also makes a return trip to the director’s chair, hopefully taking full advantage of current financial woes to lend the dusty story some sense of silver screen life.

Critic bias alert! I adored “The A-Team” as a kid, gobbling up the exploits of Hannibal, Murdock, Face, and B.A. with fervent adolescent glee. A feature-film update seems a bit of a stretch, but the casting (Liam Neeson, Sharlto Copley, Bradley Cooper, and Rampage Jackson) is better than expected, and Joe Carnahan’s direction is sure to be superbly explosive and brawny. The show’s soldier of fortune premise is actually something suited for the big screen, filled with juicy potential for chases and grudges. As long as Carnahan preserves the teamwork and the attitude (and they better work the theme in there somewhere), the picture should turn out just fine. My hope is for a white-knuckle, mid-summer surprise, not a fetid television-to-screen adaptation along the lines of “The Dukes of Hazzard.”

Robert Rodriguez tries his hand at repairing a fractured franchise with this sequel, meant to erase the bad taste left behind by those dreadful “Aliens vs. Predator” movies and, if you’re so inclined, the strained sideshow of “Predator 2.” Hiring director Nimrod Antal (“Vacancy”) is a nice start, but Adrien Brody and Topher Grace in the lead roles? This I gotta see! Hopefully Rodriguez (who produces and co-scripts) is smart enough to construct a Predator film as precise as the original picture, which was more about manly bouts of suspense over noisy splashes of gore. The hunt returns this summer, and it’s about damn time.