Romantic comedies are a dime a dozen, most manufactured with plastic working parts, fueled by a disturbing concentration of artificiality. Bonnie Hunt’s “Return to Me” displayed an astonishing level of sensitivity and endearment within a genre plagued by insincere rigidity. Contrivances abound, no doubt, but the picture refuses any disingenuous pollutant access to the mix, instead leading with heartfelt, lived-in emotions, enjoying a deliciously homey mood of friendly flirtation and old-world wisdom (sweetly conveyed by a supporting cast that includes a mellow Robert Loggia and the late, great Caroll O’Connor), dreamily communicating a love story featuring characters worth investing in. Heck, even Jim Belushi is a scream here in a domesticated supporting role. “Return to Me” is assuredly constructed, sensitive comfort food superbly executed by the fabulously talented Hunt (a national treasure of comedy), who has yet to undertake a follow-up feature of any kind. A crime.

This moody piece from Sweden came along at a time when I assumed the horror genre was dead and buried. A spectacular mediation on friendship, manipulation, and vampiric violence, “Let the Right One In” was boldly guided by director Tomas Alfredson, who placed such immense faith in his two lead performances, from Kare Hedebrant (12 years of age) and Lina Leandersson (also 12). Two youngsters with little in the way of acting experience, the pair emitted a compelling screen magic from their pure, untrained instincts, helping to not only supply unimaginable tension to the story, but an unexpectedly organic display of warmth as well. A sinister film, filled with snowbound brutality and all forms of bodily (and feline) trauma, “Let the Right One In” was also something china-plate delicate and startlingly sincere. Additionally, it featured the finest conclusion of the last ten years -- an austere statement of lifelong commitment (and a body count to solidify it) that was two steps above brilliance.

Listen, I’m not a Terrence Malick fan. Not a detractor either, just someone sitting comfortably in the thin colorless space of judgmental hesitation. “The New World” didn’t make me a Malick believer, but it did open my squinty eyes to the glorious possibilities of unfettered fandom. An exquisitely naturalistic, blessedly speechless historical and romantic reflection, the picture, with the help of outstanding production value and the musical diamond of Wagner’s “Das Rheingold,” latches on to the senses from frame one; a demonstrative cinematic time machine floating the viewer back to an American period of unforgivable infiltration, but also a time of undeniable awe. The tragic legend of Pocahontas and John Smith has been told time and again, yet the tale has never been offered this sort of lush environmental palette and insatiable directorial hunger. It’s a film one could willingly and happily live inside of.

There’s a hypnotic tenor to “Cast Away” that’s just about impossible to pin down for closer inspection, yet remains so potent, I’ve been unable to fully flush it out of my system. The idea of isolation, of a forced, tragic removal from society and all of its swirling demands and pressures, is something that intrigues me to a point of exhaustion. “Cast Away” is a glorious exploration of a life bluntly interrupted, forced to live an uncharted island life without basic technological comforts or human interaction; it’s survival not only of the body but of the mind as well. “Cast Away” is why I adore Tom Hanks (delivering huge on a challenging role of discomfort and endurance) and director Robert Zemeckis (his sense of patience in the blockbuster realm is second to none), and remains one of the more vividly transporting films I’ve come into contact with. It’s heartbreaking, darkly comedic, bravely observational, and ultimately, pure emotional poetry. 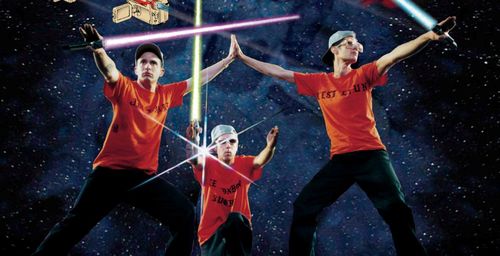 Concert films aren’t my preferred poison, but “Awesome; I F**kin’ Shot That!” wasn’t exactly your average concert film. Handing cheap camcorders to a select number of ticket buyers at Madison Square Garden, the Beastie Boys took the miles of herky-jerky footage and molded a trippy, thumping, heroically low-fi spectacle to match their phonebook-thick catalog of boomy, mischievous hits. I’ve never seen a performance film this invigorating before, not necessarily imparting a snapshot of musical achievement, but more of a rainbow-colored shock wave of panting fandom and hyper-edited Hi8 creativity. In addition to being a sublime musical document, “Awesome” provided one of the great moviegoing experiences of my lifetime, where large portions of the audience, elevated by the transcendent spirit of the Beastie Boys, filled the aisles with an impromptu dance party. Then and there, “Awesome” ceased to be passive multiplex fodder and became a religious event. Hallelujah, yo.