With Dr. John Watson (Jude Law) preparing for married life, Sherlock Holmes (Robert Downey, Jr.) is left a wreck, facing an uninspired future without his trusted partner alongside him. However, the pair are soon sucked into battle once again when the villainous Lord Blackwood (Mark Strong) uses his mysterious dark powers to cheat death, coming back to London with a plan to rule the city. Embracing the challenge, Holmes and Watson begin the hunt for clues, finding an aggressive assortment of enemies around every turn. Complicating matters is Irene Adler (Rachel McAdams), Holmes’s slippery former flame, who’s returned to London to reunite with her lost love, though the master detective remains highly suspicious of her motivations.

A character born from the mind of Sir Arthur Conan Doyle, Sherlock Holmes has remained in the public consciousness for over a century now, pushed around in countless books and short stories, feature films, and assorted pop culture interpretations throughout the years. It’s an impressive run, making the character perhaps one of the most recognizable literary figures around. The omnipresence invigorates Ritchie’s storytelling, providing an ample challenge to not only carefully urge Holmes into a fresh adventure, but one that remains respectful to the character and Doyle’s world, while flexing an entirely new set of ‘roided up cinematic muscles to help convince the wary that this “Sherlock Holmes” is more than just pipe-sucking and funny hats. 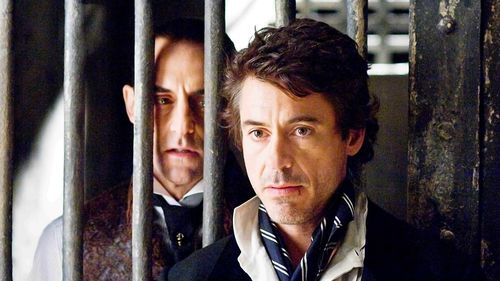 While the cinematography is drenched in pure blacks and the locations require a tetanus shot after viewing, Ritchie images a fanciful Victorian playground for Holmes and Watson to romp around in. While restraining his itches for visual whiplash, “Holmes” remains a stylish experience; the director portions out the screen wizardry wisely, employing crafty usage of slow-motion to accentuate Holmes’s ways of deduction, demonstrating how his cavernous mind is always dancing 100 steps ahead of the enemy.

While the idea of bare-knuckle brawling and shootouts might be anathema for Doyle purists, the picture smuggles the violence in smoothly, making the adventure at hand more visceral. “Holmes” blends proper manners and thrill ride atmospherics much in the same way “Pirates of the Caribbean” upped the voltage on scallywag life. The cracked-knuckle, bloodied-face heroics revitalize the source material, giving Ritchie the artistic invitation to build something bold with “Holmes,” while still keeping true to the spirit of mystery that defines and motivates the character.

Robert Downey, Jr. as Holmes couldn’t be better casting if it tried. Matched well with an equally game Law as Watson, Downey, Jr. perfectly summarizes a gaunt man who’s devoted his entire life to riddles and clues, unable to calm his incessantly buzzing mind. It’s an articulation of genius that makes “Holmes” a fascinating film, with wry Brit dialogue flying out of the actor’s mouth so fast, Downey, Jr. can’t always keep up with it. He’s outstanding as the super-sleuth, sharing pointed chemistry with Law that Ritchie and the screenwriters use to introduce a marital component to the Watson/Holmes pairing. There’s an unspoken love shared between these men, wickedly communicated through cheeky looks and rare bouts of inarticulate stammering. Ritchie doesn’t go overboard with the innuendo, yet the bond between Watson and Holmes extends beyond an exchange of theories, allowing the actors to play much more than simple familiarity. It’s a spice the film needs when the Blackstone subplot pulls more bootleg turns than it can safely navigate. 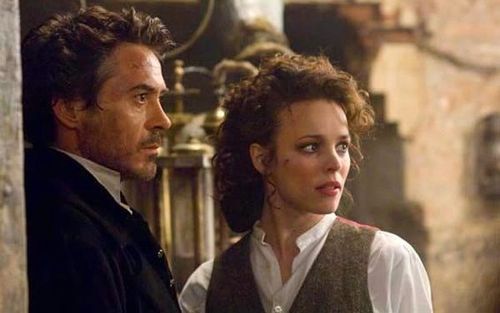 Disappointing is McAdams, flatly reading the femme fatale role. A talented performer, McAdams is just not the first actress that comes to mind when asking for an intricate characterization of sensuality and probable deception. She also throws an unconvincing punch. Law and Downey, Jr. lap her several times over, making the miscasting woefully apparent the more the story demands of the lukewarm character.

The mystery that winds through “Holmes” is a mighty one, in a consistent state of flux to keep audiences on their toes. It’s difficult to tell if the Blackstone puzzle is authentically complex or just ornately decorated to easily confuse. Either way, the Satanic question marks bring about dynamic spins of plot, with Ritchie tearing through the adventure at top speed, bringing in famous locations (including a dazzling showdown on mid-constructed Tower Bridge) to conjure a superb bygone mood. The stiff-upper-lip may be newly scarred and the magnifying glass is no more, yet “Sherlock Homes” rousingly reworks a legend, crafted with an irresistible roguish spirit, finally (hopefully) bringing Guy Ritchie the audience he deserves. 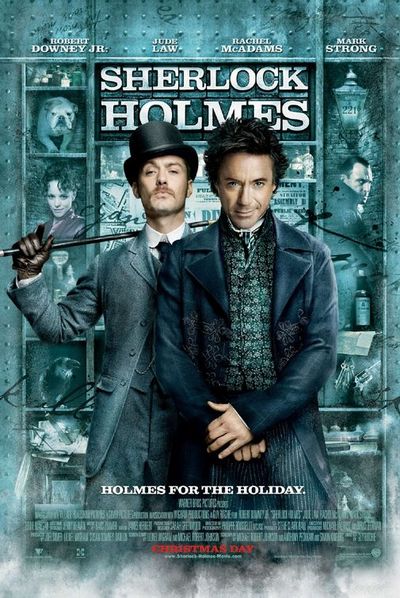