Jane (Meryl Streep) has spent the last decade of her life trying to rebuild her world after her divorce from Jake (Alec Baldwin). As their youngest graduates college, the reunion sparks a very married Jake to Jane, instigating a night of passion that stirs up renewed attention within Jake for his former wife, now a successful business owner and empty-nester. The two commence a torrid affair, intensifying Jake’s longing for the past, while making Jane neurotic, terrified she’s making a colossal mistake. Matters are further corrupted by the arrival of architect Adam (Steve Martin), who takes a shine to Jane, but can’t quite figure out where her heart lies.

The engineer behind such films as “Something’s Gotta Give” and “The Holiday,” Meyers has a wheelhouse of WASPy concerns that she’s mined to sizable box office returns. Meyers has a proven formula, spotlighting the shallow concerns of the privileged, playing around with a wish-fulfillment fantasyland of cushy dream jobs, palatial estates, and globe-trotting memories to help buffer comedic left turns of love. Hey, if it ain’t broke, why fix it?

“It’s Complicated” has the sticky Meyers jelly of absurd luxury spread all over it, but the opportunity to nab substantial actors to perform the script is just the miracle she needs. On the page, “It’s Complicated” feels lived-in but unquestionably shrill, pushed through a sitcom grinder that includes a sequence of fiftysomething BFFs squealing about their sexual fantasies, a few pot jokes, and fun with male nudity. The ensemble takes the raw Meyers materials and forms something enchanting, if not entirely believable, selling the stuffing out the jokes and multiple situations of comedic humiliation.

Of great importance here is Meryl Streep, who conveys this innate pain and swirl of confusion that makes Jane a terrific centerpiece to the story. The actress grabs the awkward waves of regret hanging over the character as she helps her ex-husband cheat on his trophy wife (Lake Bell), turning Meyers’s trite plotting into a satisfying arc of madness, playing up Jane’s perpetual discomfort, yet embracing her rekindled sexuality. As if I need to remind the world that Streep can play anything, yet “It’s Complicated” offers even more reason to bask in her glow. She can make the idiotic seems Shakespearean. Meyers is lucky to have her. 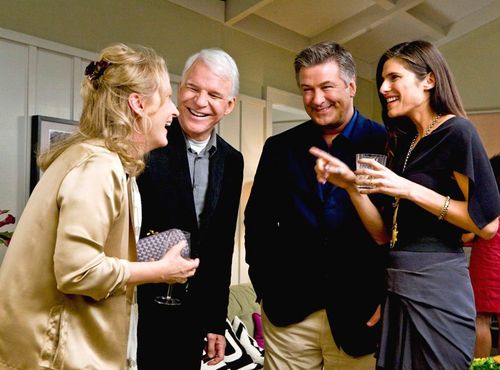 Matching her beat for beat is Baldwin, here as the horndog ex easing into a serious case of divorce lament. Baldwin is broadly comedic here, often in various stages of undress (he’s adorably doughy, a sore subject Meyers slips into the script), but Jack isn’t a villain. It’s a miracle bout of restraint; the script is almost sympathetic to the adulterer, looking to understand a middle-aged man finally feeling the enormous gravity of his previous misconduct, extending beyond sexual needs to a domestic ache as Jack’s reunion with Jane brings about a brief unification of their family. Baldwin’s pure gold here, enjoying his time chasing Streep around with a hard-on while giving Adam (Martin finds a rare breath of humanity to play as the hapless suitor) the stink eye.

“It’s Complicated” reaches a loathsome “Three’s Company” pitch of broadness for the grand finale (involving webcams, more Baldwin nudity, and poor timing), but up to that derail, the picture is a mild sedative filled with a good run of giggles and the frightening aim of the A-list cast. Nancy Meyers would be wise to keep corralling this type of acting pedigree. It makes her merlot-stained screenplays more palatable than they have any right to be. 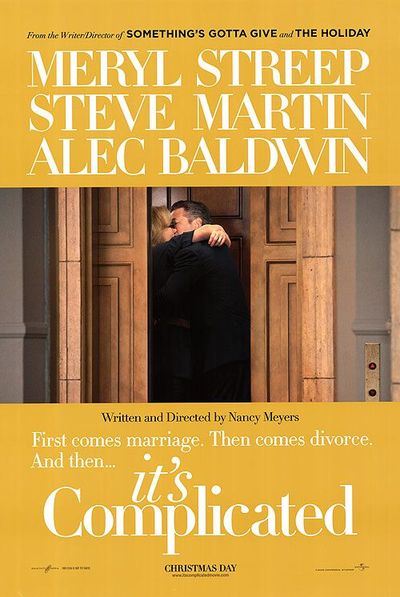