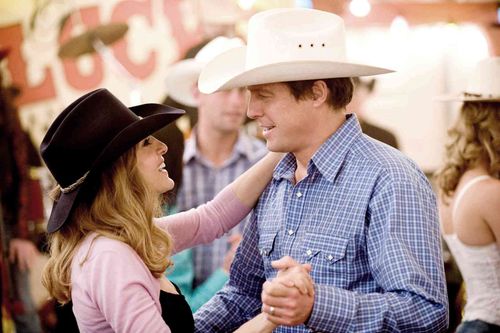 Unable to deal with the strain of martial separation, lawyer (of course) Paul Morgan (Hugh Grant) is desperate to win back his wife, elite realtor (of course) Meryl (Sarah Jessica Parker). Taking her out to dinner to discuss past infidelities and a brighter future, the evening is cut short when the couple stumbles upon a murder. Made top witnesses in a mob trial, Paul and Meryl are removed from their posh New York City womb and sent to Ray, Wyoming to live a secretive life under the care of U.S. Marshall Clay Wheeler (Sam Elliot) and his gun-totin’ wife, Emma (Mary Steenburgen). Horrified by the prospect of living by Midwestern rules, the couple passes the time mingling with the locals, finding themselves intimately communicating again in ways they never thought possible.

It’s difficult to accurately describe the feeling of hopelessness I felt while watching “Morgans.” The wounds of this idiotic film cut deep. Of course, all would be forgiven with a dollop of cleverness, but Lawrence doesn’t have it in him, fashioning a deplorable culture-clash tale that sets up easy comedic targets, yet seems too pooped to knock ‘em down.

The main thrust of the film is the New York power couple stuck in podunk America, where the locals are Republican, wear cowboy hats, love guns, enjoy taxidermy, remain dim-witted, and only shop at massive warehouse club stores. Paul and Meryl might as well be on Mars. Pulled out of their cosmopolitan lives, their cell phones ripped from their moisturized and manicured paws, Paul and Meryl are trapped in small town America -- there’s only one restaurant in town (stocked to the gills with mayonnaise), one doctor to help the community, and there’s a constant threat of bear attacks.

This is a familiar set-up, used in hundreds of movies to best isolate the comedic potential of the standard fish-out-of-water scenario, but Lawrence doesn’t play the lead characters as bumbling nitwits forced to learn hayseed lessons. No, Paul and Meryl are the liberal, elitist surrogates for the audience. They know things about nutrition and animal cruelty, about style and substance the yokels fail to comprehend. I supposed it’s a harmless film overall, yet “Morgans” straddles that fine line between farce and character assassination. It’s one thing to sit stone-faced watching Lawrence blunder his every single attempt at humor, but the great state of Wyoming doesn’t deserve such a slight, even if it serves a larger portrait of broad comedy. Lawrence never has the Morgans embracing their country education beyond a superficial level of communication (at one point Lawrence gives Meryl and Clay a bizarre scene that compares a man’s sensitivity to a cow’s teat), keeping them at a loathsome level of superiority for the duration of the picture.

It’s not all indoor smoking irritation, meat-packed refrigerators, and rodeos for our panicked heroes, they also have a marriage to tend to. Lawrence slows the already wheezing film to a dead stop when time comes to discuss these awful characters and their awful marriage, leading to numerous scenes of strident, pointless bickering. Nothing says tie your giggle bib tight like watching 90 minutes of a warring married couple, co-authored with severe bewigged shrillness by Parker. Grant? He’s barely trying here, eyebrowing up a storm. There’s also a goofy thriller element of sorts in a hitman character (Michael Kelly) out to assassinate the Morgans after spying him at the scene of the crime. You’ll root for the villain.

For the climax, “Morgans” maneuvers Paul and Meryl into a flimsy bull costume (Paul’s the ass, of course) to elude certain doom, making this excruciating feature film possibly the worst “Laverne and Shirley” episode of all time. I’m not sure what entertainment itch “Did You Hear About the Morgans?” is supposed to scratch, but as an obnoxious, poorly performed, and distastefully executed comedy, it’s near the bottom of the barrel for 2009. 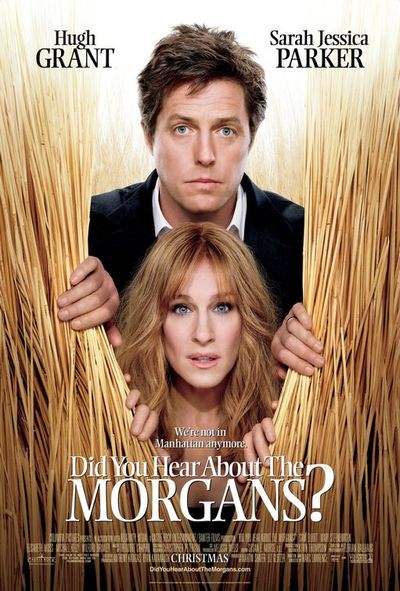 i knew that this will be hit. when i told it to my friends before they mocked at me telling it will never be hit. but after i watched it i accompanied them. they were did not like to come . but i forced them to come. now they also telling good about did you hear about the Morgans movie.