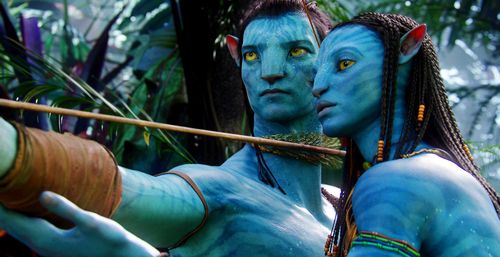 In the 12 years since James Cameron last directed a feature film (a little art-house number called “Titanic,” heard of it?), much has changed in the growing field of special effects. His latest picture, “Avatar,” reflects a filmmaker who’s spent more time polishing his impressive new tools than scraping the rust off of his once extraordinary storytelling instincts. A gargantuan production of obscene technical achievement, “Avatar” is freakishly cold to the touch; the work of man who felt he had to leave a Godzilla-sized footprint on the face of cinema when all the public wanted was simply to have him back in the game he once dominated.

150 years into the future, corporate and military forces from Earth have set up camp on the planet Pandora, a lush environment home to “unobtainium,” a miracle energy substance hidden underneath the surface. Pandora is home to the Na’vi, a race of 8-foot-tall, cat-like tribal creatures who want little to do with the invading humans. Helping to bridge relations is the scientific “avatar” program, where a human can assume the synthetic body of a Na’vi through a special coffin-like mental device. Signing up for duty is paralyzed marine Jake Sully (Sam Worthington, “Terminator Salvation”), who, along with scientist Dr. Grace Augustine (Sigourney Weaver), heads into the heart of Na’vi nation, bonding with Neytiri (Zoe Saldana), a fierce princess. Finding acceptance with the Na’vi and joy with his newfound ability to walk, Jake’s sense of duty is tested when troops, led by the wicked Colonel Miles Quaritch (Stephen Lang), head in for the kill, hungry to clear the Na’vi out of their forest home and plunder the natural resources.

I’ll be the first to admit that “Titanic” is a tough act to top. While hardly sitting around his palace drinking cosmos and losing himself in online chess tournaments, Cameron nevertheless laid low for over a decade, popping up here and there with deep-sea exploration documentaries and assorted media appearances. “Avatar” is Cameron’s reintroduction to the gladiatorial arena of blockbuster filmmaking, armed with the sort of technical research on cameras and the possibilities of 3-D to make his latest film an eye-popping return to form, worth the dismayingly extended wait between movies.

Still, while it’s splendid to have Cameron back where he belongs, I fear the “Titanic” explosion has made the man permanently soft; the crack-pipe hit of cultural omnipresence has dulled his edge. 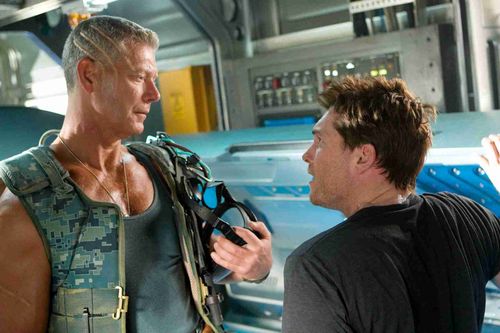 Running an unnecessary 160 minutes in length (it’s not a fleet-footed film), “Avatar” is Cameron endeavoring to serve up another world-dominating, four-course cinematic meal after pulling off unimaginable, unrivaled success with his previous feature. “Titanic” was about embellishing history, “Avatar” is about creating it.

Cameron’s vision inflates to a gigantic scale with this picture, taking the audience on a 3-D trip to the mysterious realm of Pandora, as fully realized and colorfully populated an alien planet as I’ve seen in my lifetime. It’s a 360-degree portrait of bioluminescent flora that swallows Jake and the Na’vi, lending exceptional splendor and outstanding CG-enabled texture to the film, punctuated by imposing fauna, who stalk the forests hunting for wandering Na’vi to snack on. There’s no doubt that “Avatar” is Cameron’s most brain-bleedingly striking picture to date; an actual formation of a world at play and at war, with Jake as our avatar into an alien landscape teeming with thrilling peril and breathtaking beauty.

Also impressive are the Na’vi, entirely CG-created, mo-cap creatures with the sort of expressive features and behavioral nuances animators will be studying for years to come. Tall, blue beasts with little in the way of clothing, DNA tendrils stored in their hair for immediate USB-plug connection to untamed Pandora wildlife, and a tendency to hiss when backed into a corner, the Na’vi are the centerpiece of “Avatar,” representing Cameron’s technical triumph and his needed foothold into the larger Vietnam allegory of the film. The Na’vi are peaceful beings, spiritually one with nature; they’re a feral force of indigenous determination, and a visual exclamation point within a film of consistently astonishing special effect achievement. 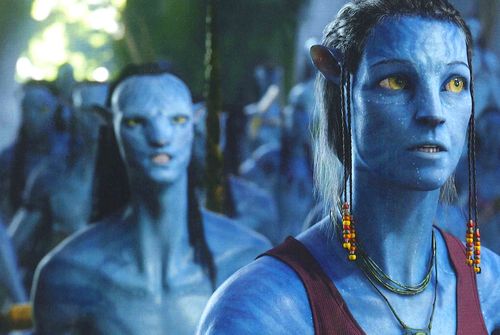 What Cameron does with all these buzzing ones and zeros leads to a thwack of disappointment with the final product. While teeming with fantastical sights and sounds, “Avatar” remains a leaden viewing experience. Cameron, feeling empowered by the heavily rewarded simplicity of “Titanic,” scripts “Avatar” with a fragrant magic marker, crudely contrasting the angelic Na’vi with the gung-ho marines, lead by Parker Selfridge (Giovanni Ribisi), a maniacal corporate stooge who wants to steamroll Pandora and inhale all of its natural resources. There are no shades of gray permitted in the film, only graceless representations of black and white, brought to life through a few dreary performances (Worthington hasn’t developed anything in the way of a screen presence yet and Lang is cringingly hammy in the wild-eyed, G.I. Joe role) and a script fueled by pathetically amateurish dialogue.

Because there’s such a colossal amount of money at stake with the film, Cameron finger-paints in primary colors to appease the widest possible audience, ditching any hope for a soulful emotional connection to Jake and the Na’vi. “Avatar” is consumed with bigness, not sophistication; the demand for awe starts to grind the film down after the introductory, new-car-smell period, soon left with only one-dimensional characters making predictable choices while the backgrounds flashdance to stave off dramatic inertia.

Cameron saves his big guns for the finale, pitting machine vs. Na’vi in a battle for the future of Pandora. Sure, there’s plenty of futuristic military hardware to marvel over, but the film’s conscience is absurdly overstated (along with its explosions and exposition), muting the impact of the spectacle, scored anemically by James Horner, who doesn’t provide any sort of heroic or cautionary theme to savor throughout the film. A shame.

“Avatar” is a tremendous disappointment, but perhaps only a mediocre film. Again, I’m grateful James Cameron has decided to return from the void, back making movies where he belongs. Time will tell if “Avatar” is a rare, indulgent misstep or the commencement of a disturbing fixation on creative control and overpowering eye candy. It’s tough to shake the thought that after 12 years of dormancy, this is the script James Cameron came up with? All the ornate animation and 3-D trickery can hardly hide that fact that “Avatar” is a hollow, coldly executed misfire. 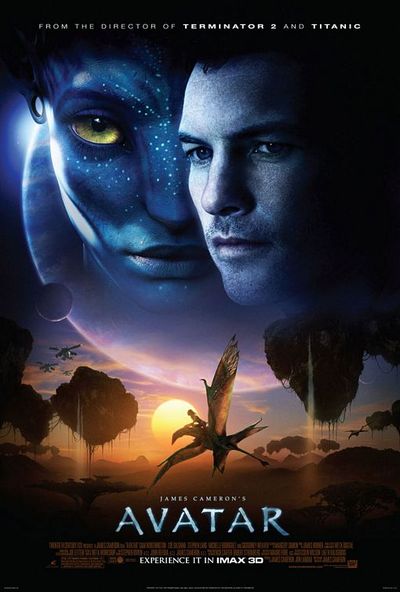 You couldn't be more WRONG

Spot on! Thanks for making me feel like I'm not going crazy. It absolutely gets a 10/10 for technical merrit, but I feel like saying to people who ask me how it is, "If you really loved the over-cheesy dialog in Titanic, you will LOVE this movie." It just didn't seem to fit.

I'd totally watch the whole thing again on mute :)

Also, I have to say it: This is a grown-up version of the movie "FernGully" Forest in danger, check; ignorant human man that transforms into something able to see the beauty of the forest, check; greedy humans out to destroy said forest, check; features a species able to communicate with the trees, check; ignorant human man that tries to thwart the efforts of the greedy humans in the end, check; princess that will one day be the spiritual leader of the society, check. I could really go on and on.

Cameron, did you think the hard-core fans of the 1992 animated movie with a soundtrack by Raffi weren't going to catch on?! Oh you are sooooo mistaken...

Harsh judgement. The high percentage on RT shows you are very much in the minority on this one Brian. I respect you alot but I certainly don't think you've made the right call here.

Actually, this review is very much inline with the majority of reviews on rottentomatoes. Most critics mark the film as being superbly viewable on a visual scale, but lacking in the story department. The term "corny" has come up a lot. It all depends on what you rate higher, the way the film looks, or the way the story tells. Most of the positive reviews take pains to note they evaluated it principally on the way it looks.

I was looking forward to Brian's review, as I find myself in agreement with his reviews quite often, perhaps more so than any other critic out there. I'll have to wait until Saturday to gauge my take on the film.

before Brian is eviscerated by the RT Grand Jury of Opinion who in reality have little to no stake in the film other than enjoying it or not (and if somehow you do enjoy some sort of profit if the RT Rating reaches 100% can you please show me how because that's a line of income I could use), can you take a breath, carefully read Brian's review where we can see admiration for Cameron as a superb storyteller and director and kudos given to technical achievement despite intelligent criticism of the weaknesses in "Avatar" and recognize that personal opinion, in this arena, is never right or wrong, its opinion. Brian's review is not going to save or damn "Avatar", it doesn't invalidate your opinions or remove your ability to like or dislike the film for yourselves. 'kay, gonna try not to sprain my ankle getting off the soapbox...

While I liked watching Avater, the blogger was correct on all counts - thanks so much for not following the Emperor's New Clothes crowd.

Cameron was never big on deep characterisation, but this is shallow even for him. Totally agree with the blogger: '12 years away and this is the best script he could come up with?'

I agree with the review-- except to add that I did not feel that special effects were that great, either-- (it had the feel of a video game via Disney via 'anyone will be awed with 3-D effects'. I wasn't.)
The film was a huge disappointment as it tried to be all things to all people-- and thus hit the lowest common denominator, sadly.