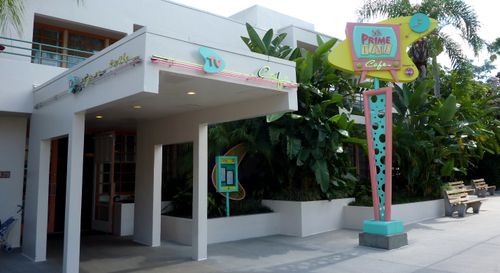 Have you’ve ever visited a restaurant and thought, “Gee, this place could use more unreasonable intimidation?” Well, do I have a place for you. Located within Disney’s Hollywood Studios, the 50’s Prime Time Café is a throwback eating escapade to the family dinners of old, where mom, dad, and the kids would stifle their rampant sexism and racism and gather around the television to revel in the latest Tinseltown entertainment, scarfing down the most fundamental of dinner dishes with eyes glued to the tube. Disney provides the rose-colored glasses, and all the guest has to bring is a generous wad of cash and the ability to enjoy a good-natured teasing while digesting.

The décor of the Café is patterned after suburban homes of the 1950s, with the entrance of the joint resembling a living room, filled with couches and televisions, with intensive “Father Knows Best” accouterments padding out the ambiance. It’s incredibly atmospheric. However, the gimmick here is the wait staff: no-nonsense drama department grads suited up in aprons and horn-rimmed glasses to portray strict parental figures in your chow experience. As you’re seated in the dining room (teeming with Formica tables and even more televisions), these servers begin to assert their dominance. There are no elbows allowed on the tables, no hats indoors, and you must set the table (spotty silverware and napkins are nearby) before the help comes back with the beverages. Or else! 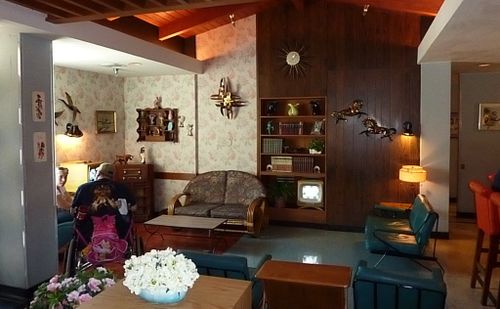 Actually, I have no clue if there’s a genuine system of punishment in place at the Café, but the servers are plenty convincing, returning guests to the tense dinners of yore, where manners were of primary concern, and God help you if you didn’t clean your plate. The staff is dressed up in charming era-specific garb, rocking retro personalities as well, which can be both comical and bullying depending on the cast member. I’ve visited the Café several times over the last two decades and have only encountered the menacing type, while my “cousins” (the parties seated nearby) always seem to luck out and find a soothing motherly sort. Perhaps I’m catnip to older ladies with minimal levels of patience. Please don’t envy me.

Seated, tersely instructed, and allowed a moment to scope out the televised loop of ‘50’s sitcoms and Disney-edited montages, it’s now time to order. 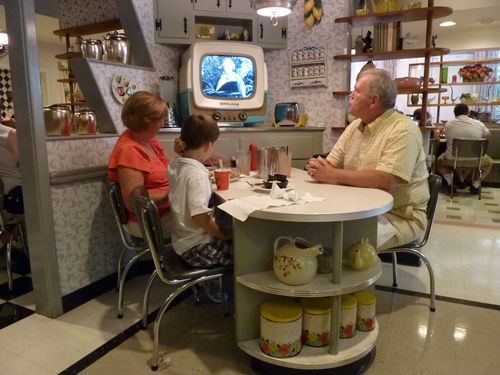 The menu for the Café leans toward comfort food and American cuisine, attempting to offer guests simple sandwiches and entrees to appease the fickle tourist mentality while sneaking in a few items that meld suitably with the theming assault. My dinner companion selected “Cousin Eric’s Char-Grilled Chicken Sandwich,” while I went for “Mom’s Old-Fashioned Pot Roast,” billed here as “fork tender.” It’s a famous dish for the Café, so I figured I would be uncharacteristically adventurous and order a plate to keep the evening on its toes. 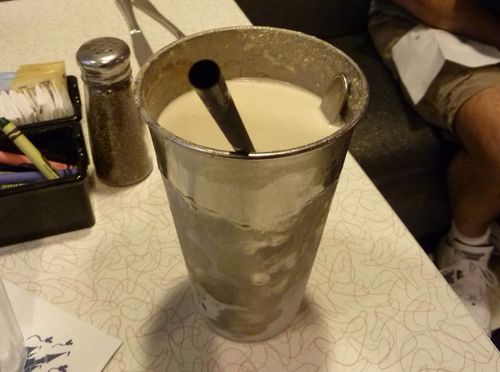 Perhaps the true reason for this visit was to finally sample the Peanut Butter & Jelly Milkshake. Ooh, such a sweet treat. Having heard about this concoction online, it became a must-have item, playing perfectly into my love for shakes and lust for peanut butter. I’m not sure I can accurately sum up how magnificent this dreamy ice cream oasis truly is. The blend of unconventional ingredients is remarkable; the drink tastes like the real thing, not an artificial knock-off with thin Great Value flavors and runny ice cream. The PB&J is ectoplasm thick, pushing the primary, joyful peanut taste forward with the sweetness of the jelly on the fringes of every last gulp. I was actually quite stunned by how delicious this thing was, perhaps necessitating a return trip in the near future to devour again. Even if it means public humiliation. I think it’s worth it.

When the food arrived, I admittedly was a little blitzed on the sugar rush of the shake, leaving the prospect of a full meal less than appetizing. Also something of a disappointment was the presentation of the famed roast beef, which I imagined arriving on a long plate of meat, potato, and veggies, nicely distance from each other. What actually arrives is a dish with every item slopped together in the style of, and I hate to make this comparison, the KFC Famous Bowl. It’s a creepy way to offer the meal, but it was too late to question the prison-style presentation. Now it was time to taste. 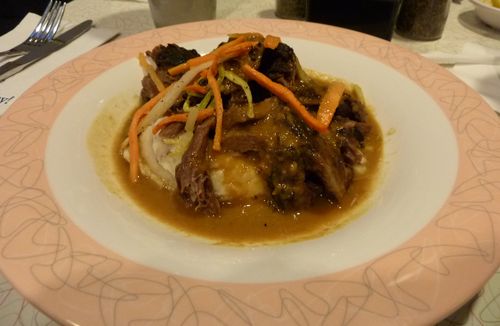 When Disney labels the meat “fork tender,” they aren’t kidding around. The roast beef was almost like a meat pudding, sliding into the potato and gravy pool without protest. I suppose the bowl delivery system is to maintain a certain dignity to the dining experience. Instead of sliding around a plate trying to keep up with the food’s elasticity, the bowl offers a fair shot at harpooning a perfect bite. The roast beef has plenty of flavor, even if the consistency is a little on the wonky side. It’s more of a happy bowl experience than an embarrassing, eat-in-the-stairwell event, and while I prefer my roast beef to fight back a little, the Disney chefs do an admirable job lending some identity to the dish. Though, to be honest, the veggie slivers tend to get in the way rather than enhance the meal.

The chicken sandwich on the other side of the table was magnificently moist and flavorful, with a substantial hunk of meat to encourage rabid consumption. A standard-issue sandwich for sure, but well executed for primo restaurant devouring, while “Dennis the Menace” and Jerry Lee Lewis blared on in the background. 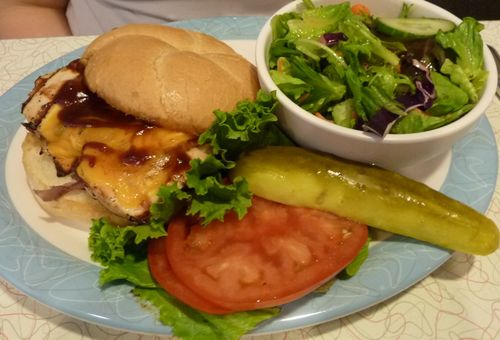 Our server didn’t make too many appearances on this visit. Being the creaky, jaded Disney warhorse she was, this was a development I was pleased with, out of fear she’d move into some archaic area of the Café script that would require me to sing “Jailhouse Rock” shirtless in front of my appalled “cousins.” There’s actually a threat of public humiliation made if your plate isn’t cleaned at the end of the meal, with some servers requiring the offenders to croon “I’m a Little Teapot” to the entire restaurant. I’ve actually witnessed something along these lines before, though the man on trial at the time was a giggling tourist, clearly elated to be stripped of his dignity. A happy fellow embracing the heckling from his family. I’m not sure what happens if someone actually refuses to partake in the degradation, but I wasn’t about to be the Christopher Columbus figure on this point of public terror. You better believe I cleaned my…er, bowl. Actually, serving portions being within reason, this was not a Herculean feat. The shotgun mentality is a unique to the Café, and it does add some flop-sweat zest to the evening.

The Café is a marvelous example of Disney theming, going above and beyond the park eatery routine to give the guest a startlingly immersive experience, albeit one of extreme tension at times. It’s an unforgettable establishment, though not solely for food. For those who like to extend the theme park submersion, this is a required stop for refueling. Taking the guest back to the primary colored world of the Eisenhower era, the 50’s Prime Time Café is a singular experience unmatched in the area of “foodtainment.”

And if you don’t order the Peanut Butter and Jelly Milkshake, you’re missing out on perfection. 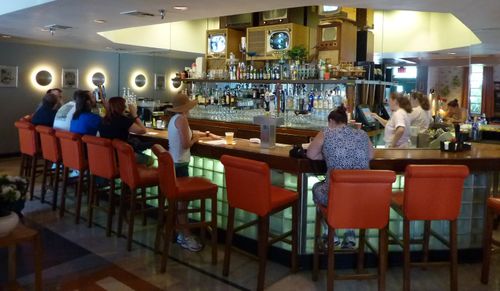 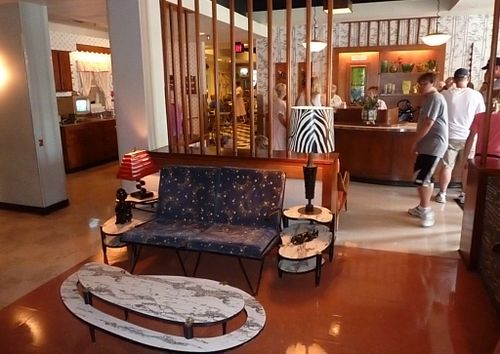 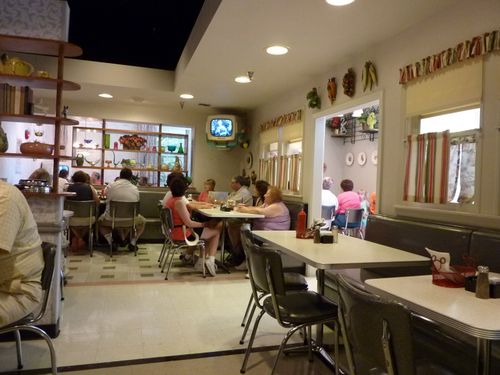 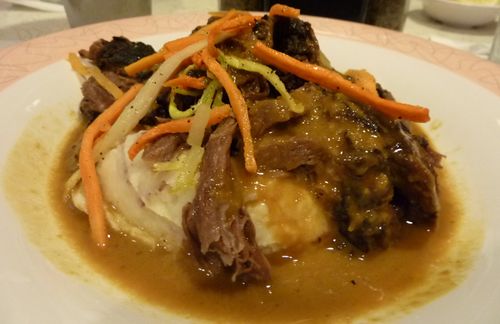 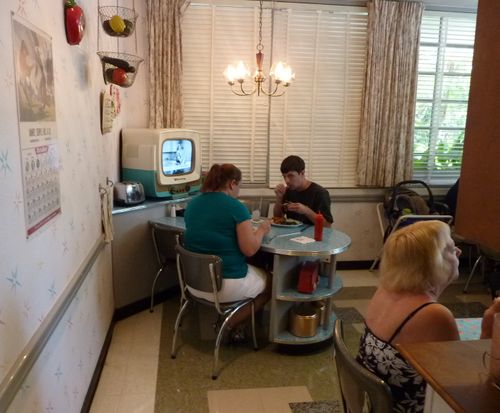 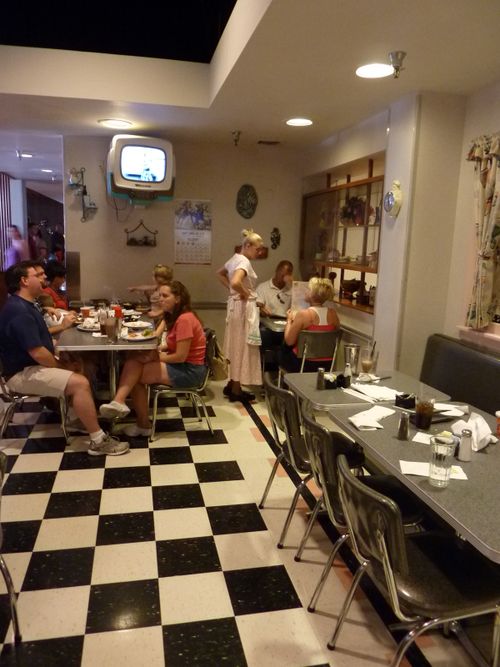 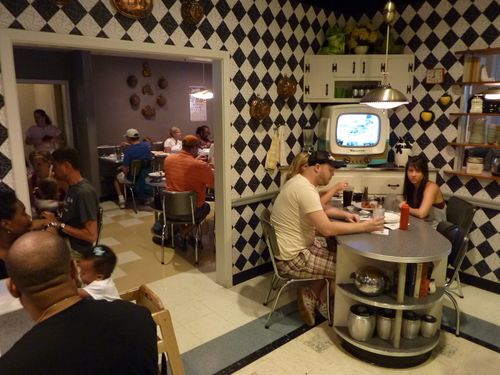 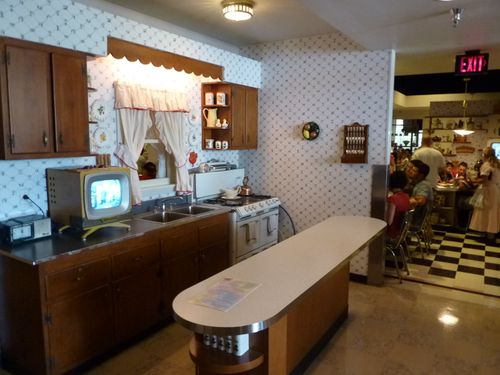 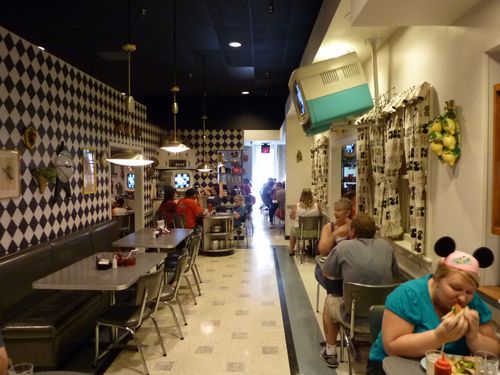 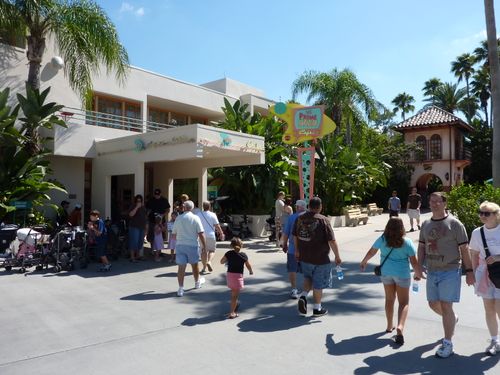 I didn't know they allowed Canadians to make wine.

I wish I could try that PB&J milkshake, it sounds amazing. I probably won't be going back to Disney for a while but when I do...that will be my first stop!