Goodness, has it been a year already? On the eve of the release of “The Twilight Saga: New Moon,” the producers have lined up a new round of merchandise to cash in on the assured hysteria unleashed Friday in movies theaters everywhere.

To commemorate the release of “New Moon,” the candy that isn’t dandy, Sky Bar, has stepped up to the plate and halfheartedly constructed a sugared ode to the saga of Bella, that glowy vampire guy, and the gym rat wolfman dude. Branded “Heart’s Desire,” these chocolate bars are basic in construction, hilariously perplexing in design, and filled with a runny vanilla crème that should really be frighteningly symbolic of the sexual urgency of the characters, but I doubt Sky Bar is thinking that clearly. Instead, they should be accepted as candy for the masses, gobbled down by itchy “Twilight” fans desperate to hold anything pertaining to this franchise near. Edward melts in your mouth and your hand, as commanded by the largely pre-menstrual fanbase. 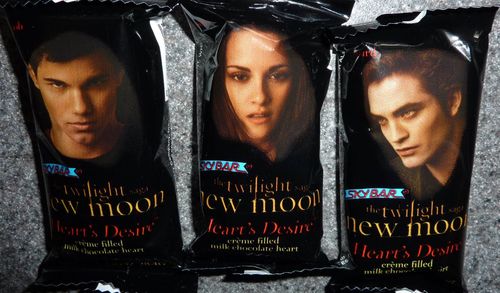 Sold in a sleeve of six bars, the packaging boasts your choice of Bella, Jacob, and Edward. While the visage of each character is printed on the wrapping, the chocolate bar doesn’t offer faces to gleefully crunch. Instead, there’s a surreal bit of design that combines two hearts, one for Bella and one for Edward, only the clarity of the match is a little on a fuzzy side. I get the Bella branding, if only because her name is plainly printed on the candy bar. But Edward is saddled with a family crest? No hair mousse, diamond skin, or baseballs? Sky Bar swings and misses big time here. It’s bad enough to not find a chocolate face waiting for you when unwrapping these suckers, but to present a candy design along the lines of a crappy tattoo? Boring. Even worse, it’s the only design available. The wrappers might incite swoony motions of character preference, but underneath all the fuss is a single portrait of obscure devotion. With a Sky Bar plug as the base. 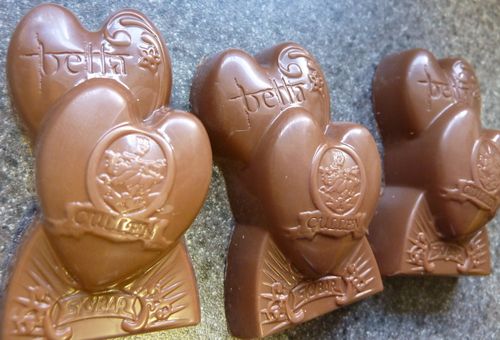 I understand that Sky Bar (owned by the taste bud terrorists Necco) has fans all over the world, at least according to junk food troll Marc Summers. I never understood the appeal of the candy bar, and their streak of ick continues with the “Heart’s Desire” brick. A simplistic construct of chocolate shell over crème, the bar isn’t very appetizing (perhaps foreshadowing the movie it’s promoting), with a cheap candy aftertaste most cheap candy brands hope to avoid. It’s suitably gooey and plentiful, but it never conjures the sleepy might of “Twilight” quite like a strong tie-in should. Candy fangs, brown-tinted Sno Balls? Oh, I don’t know. There’s has to be something out there that says “unbearable nonsense” other than a chocolate bar missing needed flavor and snap. Honestly, my bout with the “Twilight” candy hearts earlier this year made more sense to me, especially since they were themed and film appropriate. The “Heart’s Desire” chocolate bar is anticlimactic and lousy. Let’s all hope “New Moon” can top its caloric offspring, though I suspect a Mr. Yuk face, a few dry heaves, and a furious case of hand washing will occur at the movie theater as well. 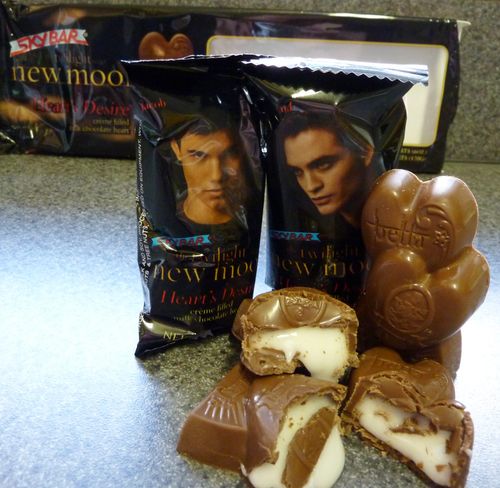 The Taylor Lautner pic was just too easy, but very funny.

I guess the idea behind the volume of goop inside is that he's been storing it up for centuries?

yammi........a new marketing tick. but i can not believe how people eat Edaward and Bella. any how i love twlighht series and hope to watch its second installment

If I had been drinking when I saw that Taylor Lautner picture, my screen would now be soaked with hot coffee. Hilarious!

Now I have to go out and buy these. Damn you Twilight you've won again!