It was only a year ago when “Twilight” entered my life. I had no history with the book, held immense reservations with the cast and crew, and found the hysteria surrounding the release obnoxiously manufactured by a desperate studio. And then I watched the film, finding every last one of my fears confirmed. “Twilight” was a dreadful picture on multiple levels, but most pointedly it was a shoddily produced affair entirely dependent on forgiving teen enthusiasm to provide colossal box office returns. Here we are again one year later with “The Twilight Saga: New Moon,” and there have been a few changes to the franchise. Changes for the better.

Engorged with love for her vampire honey Edward (Robert Pattinson), Bella (Kristen Stewart) is facing the end of high school, eager to start her life with her bothered boyfriend. When a birthday party paper cut triggers the reality of life amongst the vampires, Edward and the rest of the Cullen family skip town, leaving Bella in an unrelenting fog of depression. Comforting her is Jacob (Taylor Lautner), newly buffed and ready to make his move on Bella. As the two grow closer, Jacob also turns away from Bella right at the moment of romantic satisfaction. Forced to meet his destiny as a monster werewolf, Jacob is put to the test when his animal instincts collide with his human desire, once again forcing Bella into a life of peril. With Jacob feeling out his protective impulses and Edward facing trial with vampire elders The Volturi (led by Michael Sheen), Bella is torn between two lovers, caught in a war she’s only just beginning to understand.

Gone is director Catherine Hardwicke. That sound you hear is me doing a happy dance. A clumsy, graceless filmmaker, Hardwicke’s fingerprints have been thoroughly rubbed off the “Twilight” franchise, replaced by Chris Weitz, last seen managing the stillborn blockbuster, “The Golden Compass.” The leap from Hardwicke to Weitz isn’t exactly leaping from Wood to Spielberg, but “New Moon” benefits from the fresh creative blood behind the camera. A man who has some sense of widescreen elegance and timing, the “Twilight” under Weitz’s watch is a considerably more persuasive distraction. 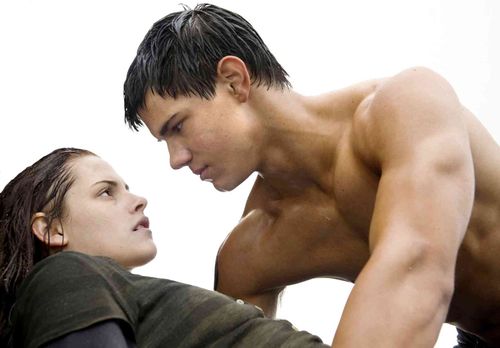 Whereas “Twilight” held next to no redeeming qualities, “New Moon” shows some effort carefully shaping author Stephenie Meyer’s world to the big screen. Weitz is a stronger conductor, finding pockets of mystery and mood to exploit while Bella figures out which monster she wants to tame. There’s one genuinely terrific scene in “New Moon” -- a hunting sequence where Jacob and the werewolves defend their turf from ginger vamp Victoria (Rachelle Lefevre, thankfully refused the gift of dialogue). It’s a superb blend of moony monsterdom, shameless soundtrack shilling, and inventive wire-fu. Hey, when all else fails the feature, at least Weitz nails one first-class scene. Hardwicke never got her film off the ground.

While promising in spurts, “New Moon” is still a stilted drag when concentrating on the triangle of lovers. Weitz is careful not to interfere with the formula that made “Twilight” such a smash, which means even more time with two lead actors incapable of providing a legitimate emotion. It’s tough to blame Weitz, since Orson Welles himself couldn’t pull anything resembling acting from Stewart, who once again tics and stutters he way through an excruciating performance. Bella’s 18 years of age now, but she still acts like an infant, and her scenes of loss when Edward shimmies out of her life are hysterically overcooked -- Bella convulses and screams like she misplaced a prized lottery ticket, not a creepy boyfriend, who incidentally enjoys rummaging through her personal effects when she’s not around. What a dreamboat.

Pattinson sort of mumbles his way through the film, though Edward is not the star of the show in “New Moon.” The tousled one leaves the movie for long stretches, mostly appearing in a ghostly Obi-Wan role, urging Bella to avoid becoming an adrenaline junkie to purge vampire love out of her system. Pattinson and Stewart’s scenes are a slow death, making it impossible to understand what type of connection they so vehemently share. The script requires burning and swooning, but these cold fish just indicate their way to total disaster. This leaves Lautner an open shot to steal the film, and the actor gets halfway there. Revealing a personality (Stewart and Pattinson’s kryptonite it seems) and a spunky attitude, Lautner overcomes his limited range and atrocious dialogue to add some spark (and obscene muscles) to an overwhelmingly dreary picture. 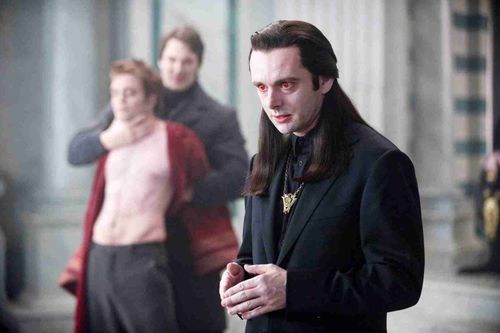 Also of interest is Michael Sheen as the David Coverdale figure of the Voltari gang, who camps his way through his brief shot of screentime, though in the best way imaginable. Also rocking fangs and a ‘tude is Dakota Fanning, accomplishing nothing as a Voltari enforcer, which isn’t surprising. Why she’s here is the film’s biggest mystery.

“New Moon” is incredibly somber and artificially elongated, robbing the cynical viewer out of prime giggle fits that should rightfully accompany these declarations of love, hasty exits, and sabotaged make-out sessions. And I would love to know what the werewolves spend monthly on jean shorts. They seem to burn through them pretty quick.

“The Twilight Saga: New Moon” is just as crushingly goofy as “Twilight,” but Weitz’s effort to solidify the material is noticeable and appreciated. With “The Twilight Saga: Eclipse” due in theaters in a mere eight months (“New Moon” ends with a cliffhanger), there’s some hope that the series will improve over time, effectively righting every last Hardwicke wrong. This is not a quality film by any means, but it’s a step up, and that’s a relief. 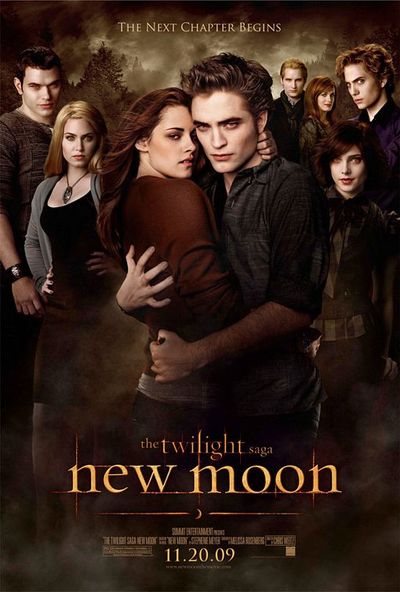 Had you read the novels you would have many of your questions answered...the film manages to stick to the novel closely and should be appriciated for that alone, i agree that Twilight was terrible, it was also no reflection on the emotion that should have been built on ofor the relationship to be understood by an audience.
I suggest you read the books to appriciate the film and the role that Dakota will play in the next film.