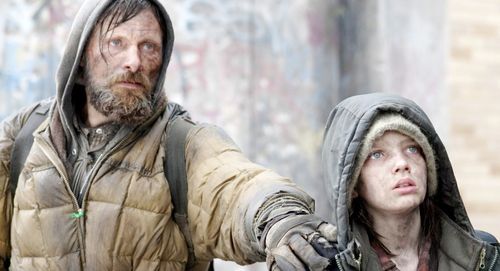 “The Road” is a bleak and wholeheartedly downbeat motion picture. As a film critic, it’s a challenge to stay away from those gloomy descriptions, for fear of chasing away moviegoers who only desire optimism from their cinema, but the reality of the picture cannot be sugarcoated. It’s the end of the world. There are no heroes, prospects, or tickles. “The Road” is a crushing dose of negative energy, communicated through the laudable guise of a parental protection story. It’s a searing, sporadically beautiful film, but something to tap your toes to? This feature is perhaps the very opposite of a good time.

An undefined catastrophe has occurred, and the aftermath has rendered the planet uninhabitable. Those still living have worked through starvation by turning to cannibalism, wandering the countryside looking for fresh victims to consume. For Man (Viggo Mortensen) and his Boy (Kodi Smit-McPhee), the ugliness of life is not an option, dragging themselves through endless miles of peril and desolation, hopeful to reach the coastline and onward down south. Hungry, emotionally wrecked, and facing doom from all sides, Man and Boy continue on their journey, pushing themselves for reasons even they barely understand. Aware that an illness is slowly taking his life, Man hopes to impart Boy with a sense of survival and the honor of self-sacrifice, haunted by the memories of his wife (Charlize Theron) who couldn’t bear the new world order.

An adaptation of Cormac McCarthy’s celebrated 2006 novel, “The Road” makes a great case for the “not everything needs a cinematic adaptation” argument. Permitted pages to illustrate psychological erosion and environmental horrors, McCarthy’s book found the needed stability of despair that made this chilling tale of apocalyptic acceptance priority reading for millions. On the big screen, “The Road” paints a disquieting picture of life after death, observing a world gone mad, though blanketed with an unnerving mournful stillness as nature slowly breaks down. 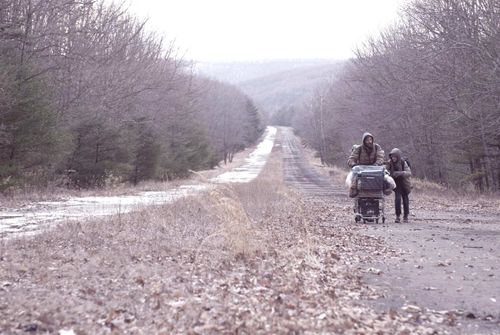 Director John Hillcoat (“The Proposition”) deserves accolades for capturing the wandering dread of the material, constructing a wasteland of empty homes, interstates, and woods for Man and Boy to stagger through on their way to an unlikely redemption. The film is exquisitely austere, highlighting a terrifying futureworld of grimy desperation. The images are searing, but there’s little for Hillcoat to bat around besides endless agony. “The Road” is glacial and precise, but rarely offers the viewer something to chew on besides utter finality. Man and Boy are thinly drawn figures of suffering, with flashbacks filling in the gaps, but it’s not enough to make the slog nourishing. Despair has been the cornerstone of many a great motion picture, yet “The Road” never transcends misery. The picture wallows in sorrow without the benefit of literary enlightenment. This is material that belongs solely on the page. Cinema can’t carry the same density of fear.

Viggo Mortensen communicates frustration magnificently and carries the picture well. Smit-McKee is a young actor, but not a convincing one, hitting the same shrill notes of naiveté over and over. Hillcoat would’ve been better off making the character a mute witness to worldwide fatality. Their relationship is meaningful but not dramatic, and the more the picture demands their viewpoint, the less engaging the material becomes.

“The Road” locates a primal survival need. That unstoppable human spirit found in some that won’t permit failure out of fear salvation will be missed. Those are powerful moments, but they are few in a film that lingers more than it gives. “The Road” is a crushed orchid, appreciable on a visual level, but a laborious to retain, numbing the disturbing doomsday impact and sense of parental panic. 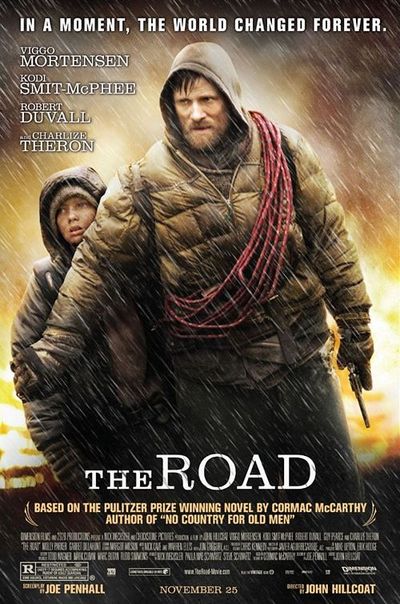 Really? So the idea of exploration of love is too complex for you? Love of a parent toward a child, love between the husband and the wife, love between the parent who can't bear to put her son through the inevitable, love of self....all these concepts are not generic enough apparently? You can't put yourself in these situations and wonder what options you have?
Go watch Alvin's Squeakuel. That seems to be more your speed. This movie probes ideas and feelings that are rarely addressed.
I will keep your name in mind when it comes to reviewers that are worthless.