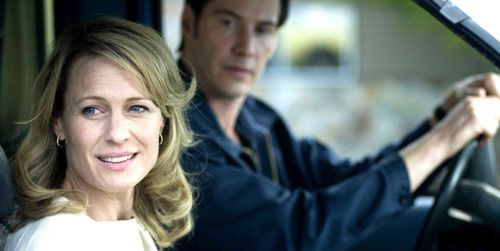 Robin Wright Penn (though now she’s capped the Penn) has enjoyed a career of weepy, meditative roles that have made fine use of her expressive face and special way with sorrow. Wright’s always been an excellent actress, but she’s seldom offered characters that make the most out of her range. “The Private Lives of Pippa Lee” shakes Wright out of her sullen coma, bestowed a juicy role that magnifies her personality and ability to communicate the slow, dreadful burn of remorse. Wright is the miracle this picture needs, helping the material achieve an emotional tempo it wouldn’t otherwise reach without her stellar contribution.

Pippa Lee (Robin Wright Penn) has found herself cornered yet again in life. Married to Herb (Alan Arkin), a much older man, the couple has moved into a retirement community to deal with his wavering medical condition. With children that ignore her (Zoe Kazan and Ryan McDonald) and a neighborhood filled with seniors, Pippa is left with ample hours consider her fractured life, from time with her a speed-addicted mother (Maria Bello) to mistakes made while living with her lesbian aunt (Robin Weigert). Dealing with severe sleepwalking issues and a marriage that’s grown colder and less dependent on her, Pippa finds some comfort in the company of Chris (Keanu Reeves), a fellow wounded soul trapped in the community against his better judgment, who sees through Pippa’s veneer, triggering turbulent emotions within her buried long ago.

Adapted from her own novel, “Pippa Lee” is the latest cinematic effort from Rebecca Miller, director of the superlative “Personal Velocity: Three Portraits” and the drama “The Ballad of Jack and Rose.” A filmmaker with a keen eye for the feminine perspective, Miller puts her absolute submersion in the “Pippa Lee” world to good use, feeling out rough edges of the picture most directors would barely bend over to understand. Miller has a clear goal in mind, but scattered pieces of story to employ, with Pippa’s headspace a flurry of guilt and hesitancy, often manifesting itself in unusual ways.

Miller mines those consuming spaces of antiseptic domestic consolation, presenting Pippa as a woman drawn to the tranquility of marriage as a way to quiet her frazzled mind, giving herself to her husband to avoid any further examination of her soul. It’s destructive behavior learned at an early age with her frantic mother, carried over to a corrupted childhood that found Pippa achieving her stride through chemical and sexual experimentation. It’s a tricky psychological dance for Miller, looking to compact an entire life’s manipulation into a tight 90-minute-long feature. However, the major fault lines are felt as the character achieves her accelerated maturity through the 1970s and ‘80s, landing at the feet of Herb and his reassuring experience.

With Wright, Miller has direct access to Pippa’s splintered mood, with the actress communicating a shredded scrim of domestic contentment covering a quivering wreck of insecurity. With a tight, pinched voice and spotless housewife glamour, Wright conveys an extraordinary amount of emotional disease with the most casual of glances. She’s remarkable here, served well by actress Blake Lively, who fills in for the colorful flashbacks. Pippa carries an impossible weight on her shoulders all the way through the feature (most of the burden self-inflicted), and I was spellbound by Wright’s ability to cleanly articulate such insatiable thirst for salvation, looking to others to fill her abyssal void. It’s a journey of self-discovery and panic that keeps the “Pippa” machine running smoothly, even through a few disjointed tangents.

The supporting cast is incredible here, with Julianne Moore (as a lesbian fetish photographer), Winona Ryder (as Pippa’s confident), Monica Bellucci (playing Herb’s frightening first wife), Bello (capturing insanity wonderfully), and Reeves (playing a stoic angel of orgasmic deliverance) popping in to add some star power to Miller’s film, and to offer atypical performances traditionally passed down to typical actors. Wright is the burning flame here, but the added luminosity fills out the picture superbly.

When fate offers a cruel turning point, Pippa is once again afforded an opportunity to reclaim herself, but paralyzing fear might thwart her advancement yet again. It’s a last act sting that’ll take a brave filmgoer to fully appreciate (Miller heads in a surprisingly blunt direction), though in Wright’s care, the emotional quake is easy to value. 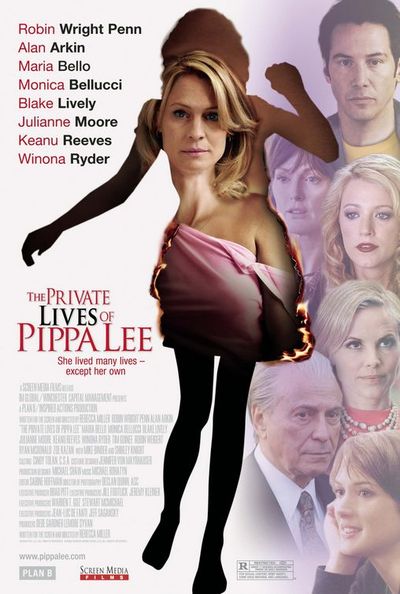