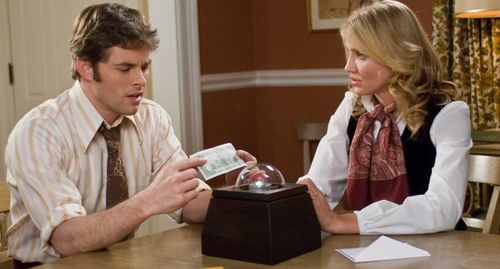 In Virginia circa 1976, Arthur (James Marsden) and Norma Lewis (Cameron Diaz) are under pressure to keep up with their bills, with Arthur failing to secure a desired astronaut position at NASA. Into their life comes Arlington Steward (Frank Langella), a disfigured man who arrives with a box and careful instructions. Inside the box is a red button and, if pressed, a stranger will die, with one million dollars left to the couple as a reward. Leave the button be and Steward takes the box away, never to be heard from again. Weighing their options, Arthur attempts to investigate Steward, only to find the spooky dealmaker’s associates watching him from everywhere. Norma also digs for answers, finding Steward’s origins might not be as plainly malicious as previously thought.

I respect Kelly as an intelligent fellow who could probably solve a Rubik’s Cube in four moves. His intellect and insatiable itch for the unknown made “Darko” and “Southland” into distinctive treasures, but his imagination shows a considerable reduction of tread while navigating the winding road of “The Box.” Adapting the Richard Matheson short story “Button, Button” for the big screen (after a previous stop on an episode of “The Twilight Zone”), Kelly allows the source material a chance to only eat up a fraction of the screenplay. This is a crying shame, as Matheson’s contributions are the only convincing suspense acrobatics of the picture. 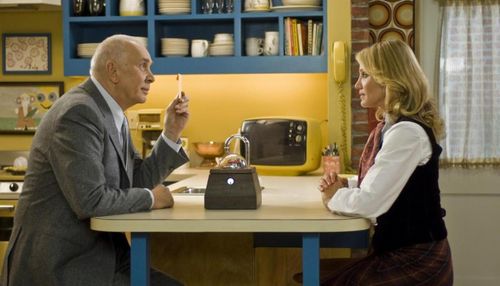 A sci-fi morality tale, “The Box” presents an assertive “would you?” dilemma into the minds of the audience. Knowing someone would perish, be it baby or bum, would you take the fat cash and slap the red button? Or would the guilt, the sheer unknown elements of the situation, be enough to ruin your life, leaving refusal the only choice? “Box” sincerely addresses these questions, and Kelly understands how to squeeze the Lewis pickle for the optimum amount of dread. Shot with an impressive HD-powered ‘70’s glaze and captured with convincing special effects, Kelly opens “The Box” with stupendous promise. It’s a clean machine of suspense and ethical debate, assertively displaying hesitant heroes, a ghoulish villain, and a devious offer perfectly arranged to feed post-screening debates for years to come.

And then Kelly begins grating nonsense over the whole magnificent effort.

Once Arthur and Norma make their choice, there’s nowhere for “The Box” to go. Kelly, understanding the limitations of the short story adaptation challenge, pulls a bootlegger’s turn with his script, moving away from tentative reality to pure sci-fi. We’re talking operatic nose bleeds, liquid doorways to the afterlife (a Kelly staple), and a grandiose threat from unspecified origins. Kelly looks to the skies to embellish “Box” past the raw materials. While there’s a fascinating pull in the early going, hope is drained the longer Kelly stretches the mystery. At nearly two hours, the feature runs completely out of steam by the conclusion, making horrific dilemmas of life and death feel like amateurish stalling. “Box” bites off way more than it can possibly chew, and the flavor is overwhelmingly stale.

It’s difficult to label “The Box” simply incomprehensible. The worst offense of the film is the manner in which it pushes the viewer away, unable to clarify itself to a degree where it feels more like a puzzle and less like a diary reading. The feature willingly runs off the rails, and normally that sort of fearless sense of adventure is welcome. Heck, it’s benefitted Kelly on two previous occasions, but “The Box” is no party. Perhaps its secrets are not effortlessly interpreted, but they’re easily telegraphed.

Somebody get Richard Kelly a Katherine Heigl romantic comedy stat, or else we might have yet another talented filmmaker unable to wiggle free from his own cavernous pretension. 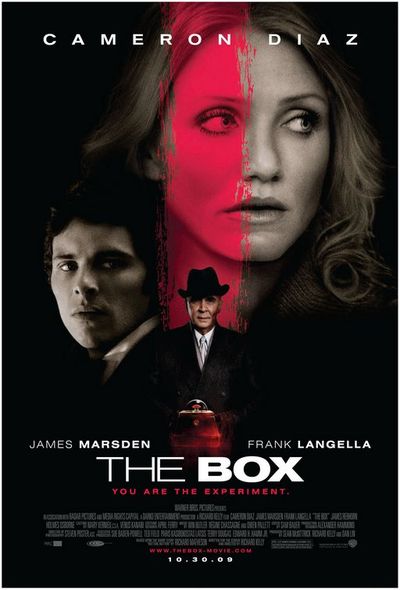 aww man, that stinks. I was looking forward to this. I'm glad you said that Southland Tales was overrated, I enjoyed it. It's not one I can watch all the time, but it's definitely entertaining!