Film Review - The Blind Side 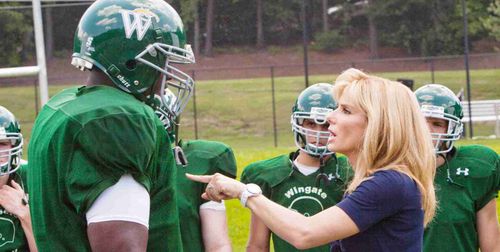 To the average cynic, “The Blind Side” might appear to be infested with cooties. Following an impressive string of feel-good racial divide entertainment offerings, “Blind Side” carries the burden of immediate derision. It turns out the film isn’t the total embarrassment the Warner Brothers marketing folks would have you believe. Instead, the picture is a friendly, tender audience pleaser working broadly to reach out to a wide audience that wouldn’t dare reject a compassionate tale of the affluent and sassy helping out the underprivileged and borderline mute.

After a lifetime of abuse and neglect, imposing African-American teenager Michael (Quinton Aaron) is offered an opportunity to attend a Christian school, removing him from the dangerous elements of his life in the Memphis projects. Struggling with schoolwork and homelessness, Michael’s life is turned upside down by Leigh Anne (Sandra Bullock), who takes the silent young man into her home, making him a part of the family (including Tim McGraw). Helping him put his life in order, Leigh Anne bonds with Michael, watching him grow from a private soul of minimal words to a football powerhouse, where his intense sense of protection makes him a gridiron star all the colleges are after.

Adapted from the Michael Lewis book “The Blind Side: Evolution of a Game,” the feature film version opens with a brief prologue concerning the football prowess of Lawrence Taylor, who turned the position of left tackle into the game’s second most pivotal role. And then football disappears from the storyline for quite some time. “Blind Side” looks to show the humanistic side of Leigh Anne and Michael, who eventually found gold in the game, but arrived at his success through determination, natural talent, and Leigh Anne’s southern-fried tenacity.

The role is ideal for Bullock, permitted to dredge up her inner sassmouth to portray Leigh Anne’s no-nonsense approach to rearing Michael. It’s a showboat performance, no doubt, yet Bullock grounds the wild antics in flavorful behavioral nuances, showing endearing life behind stiff bangs and tight skirts. Leigh Anne is a ball-buster, but her connection to Michael is communicated well by the actress, who leaves just enough of the door open to perceive the character as reluctantly vulnerable, slipping into lioness mode when parental guidance must be summoned. Bullock is terrific here, nicely weaving through massive clichés to find Leigh Anne’s true purpose. She also makes fine music with co-star Aaron, creating a plausible odd couple relationship rooted in southern manners and enticing domestic stability. When the film settles in on the supportive family dynamic, “Blind Side” relaxes and enjoys the combustible elements.

It’s a shame that writer/director John Lee Hancock (“The Rookie,” “The Alamo”) doesn’t always trust the natural energy of the performances to carry the film, chasing some dispiriting clichés of prejudice to threaten the beguiling innocence of Michael’s presence. Mercifully, the script stays inches away from shock value racial epithets, but Hancock tangos on the border of such prepackaged ugliness, trotting out a few absurd redneck/southern belle appearances that diminish the intimacy of the story. Michael, juggling obscene poverty and homelessness, has more than enough obstacles in his life to mine for dramatic nutrition. Encouraging formulaic reactions from fringe characters turns “Blind Side” into a coloring book.

Once football comes back to steer Michael’s life toward the gold mine of college, “Blind Side” indulges a 4th quarter subplot concerning troubling NCAA revelations that further corrupts the tone, looking for a way to return the spotlight to the bulky teen, though going about it in bold lettering that only delays the inevitable. Hancock’s insistence on melodrama destabilizes the performances and robs “Blind Side” of true sentiment, demanding the film trace along established lines of audience approval instead of simply discovering how this funny looking pair found a common ground. It’s the tender interaction between Leigh Anne and Michael that sustains the “Blind Side” tension, not plastic acts of tragedy or insensitive supporting characters. Too bad Leigh Anne wasn’t allowed in the editing room to knock some sense into Hancock.