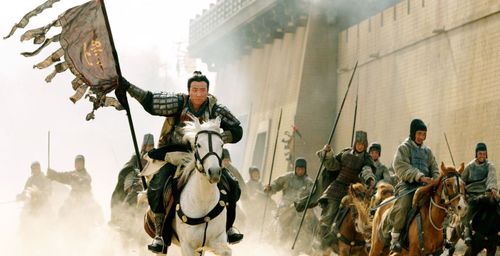 After making his mark on the Hollywood action movie scene in 1993, famed director John Woo returns to his Asian cinema roots with the Chinese war epic, “Red Cliff.” Massive in scale, ridiculous with blood-soaked action, and submitting a user-friendly spectacle of warriors and weapons, “Red Cliff” is a majestic motion picture that returns Woo to the sort of whirlwind screen restlessness he built his legendary name upon.

The year is 208, and General Cao Cao (Zhang Fengyi), under the approval of the Emperor, is preparing to tear up the Chinese countryside, looking to the southlands to continue his reign of violence. Witnessing Cao Cao’s lust for power, warlord Liu Bei (You Yong) fears the worst, allowing his military strategist Zhuge Liang (Takeshi Kaneshiro) to offer a solution: form an alliance with rival Sun Quan (Chang Chen) by convincing Quan’s advisor Zhou Yu (Tony Leung) that victory is attainable through a massive armed defense. As Cao Cao draws near, the tentative army rises to the occasion, engaging in brutal acts of war as the two sides battle for the future of China.

Western audiences are receiving a slightly condensed version of “Red Cliff” for consumption. Released in two parts overseas (roughly 280 minutes in length), this new version of the picture has been whittled down to a manageable 148 minutes, streamlining the story, allowing more fluid narrative maneuvering than the grander epic would allow. The newfound brevity works beautifully for the picture, encouraging Woo to narrow the focus of the story for those who might not be 100% on their ancient Chinese history. Essentially, Woo has sanded the edges off the labyrinthine story, making matters more primal and festering, shaping a combat tale with a new eye toward narrative simplicity to best obtain the needed awe. Purists will undoubtedly scoff, but the weight loss looks good on “Red Cliff,” permitting a more exhilarating moviegoing experience.

Woo delivers big time on the aforementioned awe, staging colossal scenes of armies in battle, mixing traditional historical conflict (e.g. an endless sea of CG warriors, or in one unbelievable shot, an infinite naval fleet) with rip-roaring martial art moves and gravity-defying heroics, developing “Red Cliff” as both a stately drama and a thrilling action film. Teeming with gushing bodily trauma, Woo paints a vivid portrait of battlefield sacrifice, articulated further through the magnificent ensemble assembled here. The performances are broadly communicative, but also achingly felt, lending the film surprising gravitas as it winds through tragic turns of fate, spotlighting a feverish strategic struggle that pits the warlords’ quest for a balance of power against Cao Cao’s underhanded tactics.

“Red Cliff” tumbles into a few pits of melodrama that fail to sap Woo’s energy, implanting a heart of sorts into the chaos. I never quite subscribed to the popular theory that John Woo bottomed out during his years in Hollywood, but “Red Cliff” clearly reenergizes his creative batteries on scale that’s eye-popping. Offered an enormous canvas to stage one of the most critical battles in Chinese history, Woo takes the challenge head on, crafting a ferocious, spellbinding war film.