I suppose after the sugar rush of wonderful family films such as “Cloudy with a Chance of Meatballs” and “Fantastic Mr. Fox,” the high was bound to crash at some point. “Planet 51” is the party pooper, looking to pass itself off as a spirited sci-fi romp crammed with slapstick and four-quadrant-friendly pop culture references to best wow the crowds. The picture is actually a poorly conceived comedy spotlighting a collection of anal-centric humor that’s about as appealing as baseball bat to the face. After watching a few creative minds take the animation genre to soaring heights, the dreadful routine and vulgar imagination of “Planet 51” is all the more dispiritingly amplified.

Life on Planet 51 is good, with the populace enjoying a 1950’s standard of living, adorned with hovering extraterrestrial technology. For young Lem (voiced by Justin Long), the future is bright, having secured an ideal job at the local planetarium and learning the girl of his dreams (Jessica Biel) is into him. However, everything changes when a NASA ship lands on the planet, carrying astronaut Chuck Baker (Dwayne Johnson) inside. Branded an alien intruder, Baker runs for his life, separating himself from his only ride back to Earth. As hysteria rolls through the town, encouraged by General Grawl (Gary Oldman), Lem finds himself face to face with Baker, believing the arrogant spaceman means no harm. With the assistance of his friends (including Seann William Scott) and mechanical pal Rover (think Wall-E), Lem attempts to elude capture as he helps Baker get back to Earth.

Within 10 minutes of commencing, “Planet 51” burns through a buffet of bodily function gags, eager to announce itself as a brainless, thinly written production. Bravo. It’s not a thrilling way to kick off a movie, but one has the feeling director Jorge Blanco is desperate to do anything to ingratiate himself with younger viewers, hoping the lowbrow stuff will make for passable matinee fodder. It’s a sweaty, unstable tap dance that creates an unpleasant ambiance of noise and repetition for “Planet 51,” which worsens the more it accelerates. 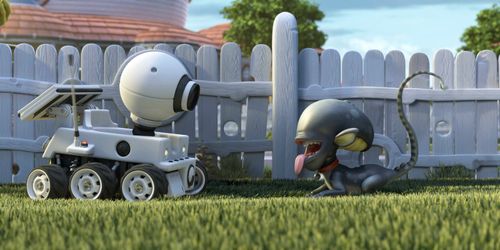 Blanco and his production love the warm reassurance of the butt, with most of the film’s jokes, be it corks to thwart anal probes or an H.R. Gigeresque pooch who merrily scoots along the grass to draw attention, centered on the magic of the rear end. It speaks to the degree of wit “Planet 51” contains, which takes great care to imagine an expansive alien world of ‘50’s suburban sprawl and classic sci-fi cinema tributes (the locals wait with bated breath for the opening of the invasion film, “Humaniacs III”), only to waste it on lazy humor in the name of “fun” (for those playing at home, there’s also a “Macarena” gag). Surely there was something Blanco and the gang could’ve fixated on besides the hindquarters?

Actually, there is: a long-haired character named Glar (Alan Marriott), who represents the growing hippie movement on the planet, to further mirror life on Earth, also providing a romantic rival for Lem. The subplot fits into the historical satire of the film, but arrives without the laughs. Unless you count mangled Dylan lyrics as a clever source of comedy.

Animation wise, “Planet 51” widens the disappointment. There’s certainly fluid bodily movement to help underscore the slapstick, but the green-centric color scheme tires the eyes after 20 minutes, and Baker’s animation has the all-American astronaut with “the right stuff” distractingly cross-eyed, as well as suffering from poor lip-synch for Johnson’s wheezy one-liners. For CG animation, “Planet 51” is a visually lackluster adventure, making peppy alien life about as colorful and expressive as a Disney Channel program.

With Grawl an anemic villain, Baker an unappealing hero (lobotomy threats are sadly never carried out), and the film’s sense of humor DOA, “Planet 51” is a rough sit. The picture grows more insistent as the plot thickens, amping up the explosions and punchlines as it speeds toward a surprisingly ho-hum grand finale. Lacking a sense of awe or welcome sense of humor, “Planet 51” is a drag, easily skipped during its theatrical run, perhaps better appreciated at home, where kids are free to nap through it and adults have access to heavy amounts of alcohol to properly endure it. 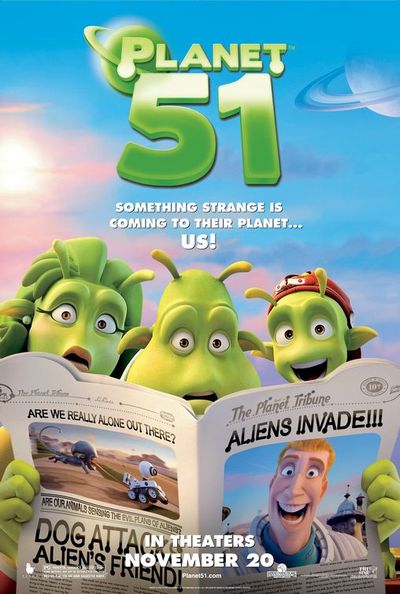