Lest I come across like a curmudgeon who despises all things slapstick, I’ll state that “Old Dogs” is poor slapstick. A spastic, noxious comedy, “Old Dogs” is scattershot and out of control, bludgeoning the audience with all sorts of eye-bulging mugging and dire cliché. It’s insufferable and lazily directed, trusting sheer frontal force will be enough to supply laughs. Shot two years ago, the picture has the feel of a movie that’s been reordered and reworked a few dozen times, shaved down to a pure goof-and-sentiment experience that fails both goals. It’s dreadful, but at least Disney’s been kind enough to suggest as much through their disheartening marketing efforts.

Partners in both business and in life, best pals Dan (Robin Williams) and Charlie (John Travolta) are facing the biggest deal of their lives when an interested Japanese firm comes calling. Looking to impress the men in charge over a few weeks of corporate wooing, plans are quickly changed when an old flame (Kelly Preston) of Dan’s shows up with two kids (Ella Bleu Travolta and Conner Rayburn) and an upcoming date with a jail cell. Dealing with his new role as a father, Dan panics, unable to process the requirements of parental duty, roping Charlie into the mess to help out with supervision. Handed two weeks to bond with the kids, Charlie and Dan struggle to balance work life with playtime, commencing a series of adventures that leave them a mental and physical mess. In other words, they’ve become parents.

I suppose this is my punishment for finding the 2007 motorcycle comedy “Wild Hogs” mildly amusing. 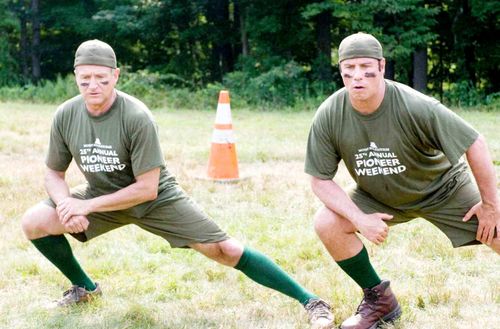 “Old Dogs” brings back director Walt Becker and co-star Travolta for another round of zany antics, again taking on the neuroses of men in their middle age. Here the comedy is domesticated, offering the plight of two characters buried deep in their profitable work life, forced to make time for two kids that reflect responsibility neither Dan nor Charlie want. It’s a perfect recipe for a conventional unprepared parent, fish-out-of-water comedy, blending madcap behavior with diluted sentiment, as the new dad learns to make happy music with his willing kids. It’s an anodyne, comfy formula that’s worked before, and with cast members such as Williams and Travolta, there’s no reason it shouldn’t work here.

“Old Dogs” feels like a crystal meth binge that never ends, burning through comedic situations and one-liners with all the graceful balance of drowsy unicyclist. Becker is unrelenting with his blast of screen energy, overcompensating for a nothing script that merely dials up the basics in physical comedy. The entire film is simply about placing our hapless heroes in humiliating situations, beating them senseless with their own cluelessness. It’s episodic filmmaking that expires immediately, glumly paraded around by Becker, who doesn’t add any sense of personality to the direction, preferring colorful cameos to act as the picture’s smelling salts (Matt Dillon, Justin Long, Ann-Margret, Lori Loughlin, Luis Guzman, Amy Sedaris, and Rita Wilson appear for no good reason). The incidents are painfully uninspired (Dan caught in a tanning spray booth, Charlie dealing with an elderly dog), accentuated with an expected procession of flatulence and urine humor (the hilarity of senior incontinence is explored), topped off with some generous genital trauma. And in case matters weren’t unfunny enough, Dax Shepard and Seth Green nab supporting roles. 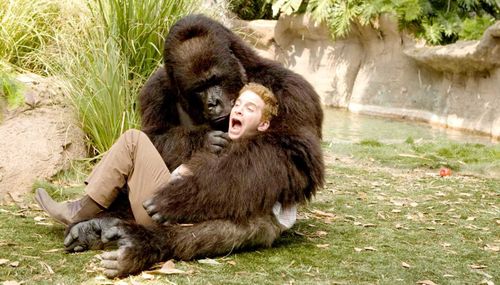 Bodies are bruised, bear feces is smeared across faces, medicine is mixed up (leading to a CG-laden sequence where Charlie can’t control his face or appetite), and then things get supremely weird. Seemingly for the hell of it, “Old Dogs” contains a scene where Dan is fitted for a “human puppet” body suit, allowing Charlie and the suit’s flamboyant inventor (Bernie Mac, in his last role) to manipulate his movements to help him appropriately interact with his daughter at a bedroom tea party. Suddenly “Old Dogs” is sci-fi.

To hack through the viscous wall of farce, the script cooks up some puppy-dog eyes from the kids, contrived hurt feelings, a canine funeral, and a few mawkish notes from the score to pass for sensitivity. A soul is the last thing the feature should be concerned with, as jokes and coherent comedic situations demand top priority. “Old Dogs” is a lousy motion picture, wasteful with its talent and clueless in direction, squandering screentime with unimaginative nonsense. Pitching this junk to the rafters only inflames its faults. 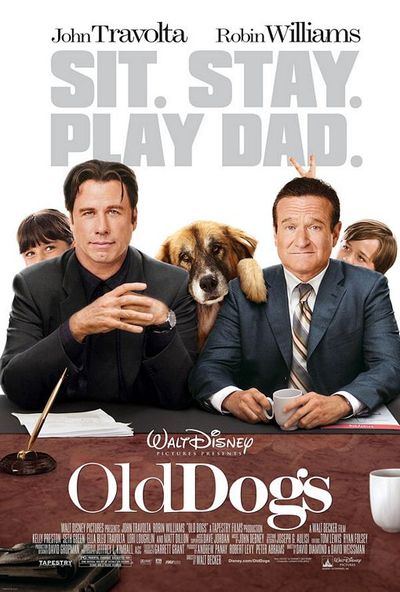 I would like to see the pull quote "Feels like a crystal meth binge that never ends!" in the TV spots.