“Ninja Assassin” quickly trips over itself trying to establish something substantial out of a frivolous concept. One of the biggest heartbreakers of 2009, the picture is a confused, tedious merging of absurdly overcooked violence and a drab screenplay, sold unconvincingly by director James McTeigue (“V for Vendetta”). It’s a ninja story for goodness sake, but McTeigue and his writers are on the prowl for something epic, puncturing the potential of the film by taking it all so very seriously.

Raised by a secret underworld of ninjas, Raizo (Rain, “Speed Racer”) has been trained to be an unflinching killing machine by the Ozunu Clan, taught to befriend shadows and master deadly weapons. After betraying his master (ninja movie vet Sho Kosugi), Raizo goes on the run, awaiting another showdown. His opportunity arrives with Europol agent Mika Coretti (Naomie Harris, “Pirates of the Caribbean”), who’s stumbled upon a connection to the secretive ninja society, making her the next target for the deadly swarm of warriors. Raizo, still burning with hatred for his abandoned brotherhood, springs into action, fighting savagely to help save Mika’s life and cut the Clan down for good.

Certainly the legacy of the ninja has been reduced to a pop culture punchline in recent years, with internet memes and hipster irony making sure that any mention of a ninja should be accompanied by a fit of giggles. “Ninja Assassin” looks to return severity to the hooded fraternity of killers, with McTeigue conducting an astoundingly violent film teeming with throwing stars, superhuman agility, and a parade of bodies cut into bite-sized pieces. The screenplay by Matthew Sand and J. Michael Straczynski stresses the ninja discipline throughout the feature, showing both reverence and some amount of glee for the cinematic legacy of the silent nighttime hunters.

Supplying enough bloodshed is not a problem for “Ninja Assassin,” with copious amounts of wet red spilled every 10 minutes, though criminally McTeigue opts for CG spurts and gurgles, and the artificiality is impossible to disregard. Still, the velocity of violence in this picture is incredible, observing the ninja at their most unforgiving and limber, with furious fights staged to take full advantage of the film’s overburdened R-rating. Unfortunately, McTeigue gets carried away in his quest to make the film sleek and moody, creating a hyper-stylized arena of fire, water, and shadows that resembles a clichéd music video at times, luridly embellishing ninja powers to reinforce their mystique. It’s a commendable effort to match the visuals with the massacres (with heavy graphic novel textures courtesy of the film’s producers, the Wachowski siblings), but the gloss guts the grit. What could’ve been a stark tale of martial art revenge becomes something tediously infatuated with flame bars and glistening stomach muscles, punctuated with enough CG fakery to rival Pixar.

While watching “Assassin,” I had trouble understanding if it was the screenplay that disinterested me or the actors hired to perform it. Looking to build Raizo as a man of honor, the film spends a chunk of its running time in banal flashback, where our young, impressionable ninja found his first broken heart and a heaping helping of corporal punishment to help fuel his rebellion. McTeigue spends an eternity building Raizo up as a questioning soul, turning “Ninja Assassin” into an origin story for future sequels. Trouble is, the onerous exposition and emotion is handed to actors either miscast (Harris is a bore and Kosugi looks more intimidating than he sounds) or painfully shallow (Rain looks the part, but there’s no life behind his eyes), leaving behind a story with little in the way of urgency.

“Ninja Assassin” is better with beheadings and characters magically willing their gaping abdomen wounds to heal than it is with profound characterizations. While the second half starts to get the hint that perhaps losing a few brain cells might be the course of action to take, it isn’t enough to resuscitate the picture. Everyone knows that ninjas are the premiere force of malice in the world. Their lone weakness? Cluttered, oblivious filmmaking. 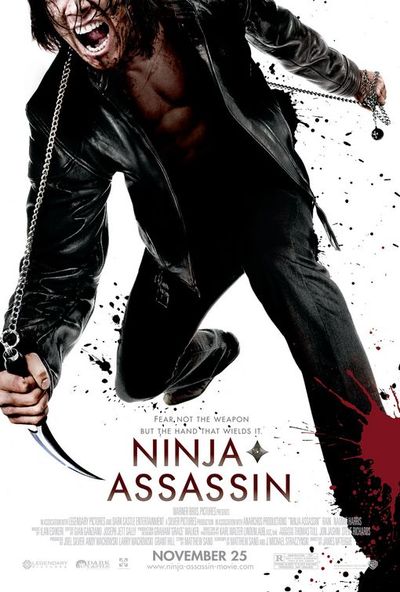