For his 17th film, Pedro Almodovar doesn’t exactly break new ground with “Broken Embraces,” instead fine tuning his gifts and decadent cinematic appetites to a satisfying routine. A spiraling, sensual story of noirish obsession and paranoia, “Embraces” is a riveting sit, due to the filmmaker’s incredible storytelling gifts, and the cast, who articulate a dreamy series of toxic encounters with sniper-like precision, tightening Almodovar’s noose with exceptional skill.

Harry Caine (Lluis Homar) is a blind writer who was once a filmmaker by the name of Mateo. When Caine learns of the death of wealthy industrialist Ernesto Martel (Jose Luis Gomez), it sends his mind reeling back to the early 1990s, when he was prepping a film with lead actress, and Martel’s lover, Lena (Penelope Cruz), while dealing with a behind-the-scenes documentary effort from Martel’s social reject son (Ruben Ochandiano). Engaging in a heated affair with Lena, Mateo learns of Martel’s violent ways, hoping to steal Lena away and finish his artistic gamble of a movie. Now over a decade later, Caine feels the rush of memories as he recalls his love affair to assistant Diego (Tamar Novas), unlocking further secrets from his close associates.

Almodovar, who extinguished his rascally ways long ago to hone his craft as a master of melodrama, doesn’t push any boundaries with “Broken Embraces.” There are no hysterical acts of tragedy or flamboyant characters drawing attention to themselves. While far from minimal, “Embraces” is the Spanish’s filmmaker most relaxed piece of work in ages, calmly turning the pages of the script, working through this knotted tale of despair with a strapping confidence. Perhaps the picture lacks the gravitas of “Volver” or “All About My Mother,” but there’s no mistaking Almodovar’s poise with “Embrace,” or his technical proficiency (aided by Rodrigo Prieto’s sumptuous cinematography).

“Embraces” explores the nature of dual identities and romantic paranoia, carefully threaded by Almodovar in a mild exercise of suspense, following Caine/Mateo as his carnal cravings lead him into Martel’s trap, with Lena as the unexpected bait. Broken down into flashbacks and modern-day revelations, the filmmaker corrals a colorful cast of characters to connect a story of deception and tragedy, continually twisting perspective and tone (a portion of the film plays as satire of film production) to keep the audience off balance and eternally curious. It’s a Telenovela saga of woe for Lena and Mateo, but glazed by Almodovar with marvelous performances and a smoky ambiance of surveillance and Hitchcockian desire, accentuating the tension and the longing to captivating degrees.

The extremes of Martel’s control are fascinating (at one point hiring a lip reader to decode on-set communication between Mateo and Lena), and Almodovar does a proper job bending allegiances to keep the story on its toes, with a few sucker punches waiting in the dark to strike. Perhaps the lack of a challenging narrative for “Broken Embraces” will disappoint those who enjoy their Almodovar firing on all cylinders, but it’s impossible to disregard the craftsmanship of the picture, and its occasional devilish surprise. 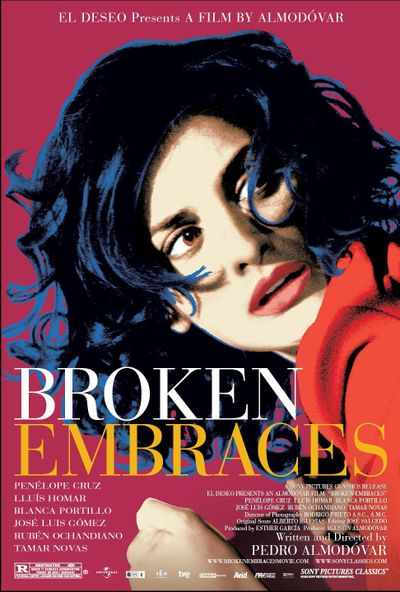