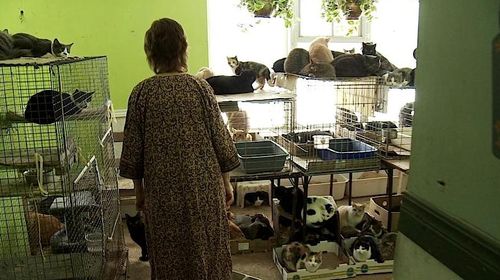 The image of the typical cat lady is a portrait of severe mental disturbance, often used comedically like in “The Simpsons,” where Springfield’s unshowered feline connoisseur leaps into action, using kittens as throwing stars as she clears the room with her garbled ranting. Of course, there’s a dark side to this lifestyle, a portrayal offered a brief but harrowing spotlight in the spellbinding documentary “Cat Ladies.”

In Toronto, four women have offered their stories to director Christie Callan-Jones for dissection; women who have an obsession with feline ownership. For Margot, three cats is her limit, showering the felines with love and attention while her personal life turns to stone. Troubled Jenny is a quick-witted 35-year-old single lady who depends on her 16 cats for comfort, pushing her dangerously close to the “crazy cat lady” brand she fears. Diane once had a potent personal life, but a disruption of her career led her to seek out stray cats, with over 100 felines taking up residence in her home. Sigi has the same hording problem as Diane, only she views the mass cat population as caped heroism, trapping feral cats to feed her God complex, imagining herself as the only savior these little furry creatures have.

Directing modestly and concisely (the doc runs just under an hour), Callan-Jones has a flavorful collection of interviewees to work with. These are passionate women feeling comfortable enough to allow cameras to capture their shame, bringing the viewer into these hot zones of kitten play. It’s easy to be horrified by these women, and to mock their litter-box-lined lifestyle. There were moments where I found myself laughing out loud at some of the habits on display, mostly out of sheer disbelief. However, this is no hack job from Callan-Jones. “Cat Ladies” is not a cheap joke. It’s a touching, unforgettable decent into various degrees of mental illness and outright loneliness, looking to probe cat fascination beyond the tempting cliché.

While all of the interviews retain their moments of shock value, I have to admit Margot and Jenny come off relatively normal. Margot, who uses her cats to fill the emptiness of her life, is articulate and friendly. Her mania is contained to three cats, though her house is a shrine to the feline, complete with a tin that houses the precious treasure of lost whiskers. Jenny is direct and disarmingly self-aware, openly lamenting her situation, but unable to find anything affectionate and non-judgmental in the human realm to replace her need for animals. She’s a victim of childhood abuse, carried into a fractured relationship with her siblings. If anything, I wanted more time with Jenny in the picture. Her refreshing candor while discussing her fixation is fascinating, while openly admitting a fear that her urges will someday get the best of her.

For Diane and Sigi, the cat nation is a profoundly larger problem. These ladies have serious hoarding issues, though in the case of Diane, the routine of cat maintenance is obviously wearing her down. Wistfully recalling her glory days of globe-trotting and close friendships, Diane is imprisoned within her own home, tending to litter boxes and meals (expenses total nearly $3000 per month), slowly losing comfort in her routine. Sigi is more defiant and perhaps confused, shows signs of mental illness as she imagines herself a knight in shining armor for cats everywhere. Her house is a den of filth, with cages and cats everywhere the camera looks. Yet Sigi finds nothing wrong with her abode, justifying the excess as a means to protect cats from the elements. Delusion is strong with this one, with the hoarding misery spreading to her neighbors, who can’t even spend time outside due the stench emanating from Sigi’s home. Wisely, Callan-Jones includes potent comments from an Animal Control officer to underline the severity of these noxious situations.

Presented in anamorphic widescreen (1.85:1 aspect ratio), “Cat Ladies” is a modestly budgeted title, with a lukewarm DVD transfer that fits the homegrown feel of the picture. Colors are solid and the HD photography is well preserved. A few sequences show pixelation problems, and the video textures of the transfer diminish the clarity at times. Still, for a budget title, what’s here is workable.

The Dolby Digital 2.0 mix is a straightforward documentary track, with interviews presented cleanly, with no discernable audio hiccups. Scoring is warmly effective, never intruding on the personalities, helping the DVD to a nice frontal push.

“Deleted Scenes” (17:00) steps further into the minds of the participants, as Jenny looks for an outside perspective to her life, Diana faces crushing vet bills while trying to scrape up a few bucks, and Sigi lends a her thoughts on the subject of pet population control. Great stuff here, especially with Jenny and Diane, further humanizing their lives. 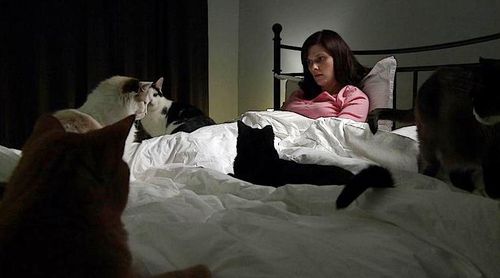 The cat footage alternates between adorable and harrowing, with a few of the featured felines suffering from illness and showing severe battle wounds. Despite the subject matter, I wouldn’t classify “Cat Ladies” as a depressing sit, only unsettling in short bursts. The majority of the picture is wonderfully enlightening, showing the humanity behind the seclusion and worry, allowing these women to articulate their passion and, for some, askew pride in hoarding animals. “Cat Ladies” cuts to the heart of this troubling issue, providing an unforgettable illustration of feline fancy taken to a cringing extreme, beautifully shaped and expressed by director Christie Callan-Jones.

For more information and to purchase a DVD, please visit www.catladiesdoc.com 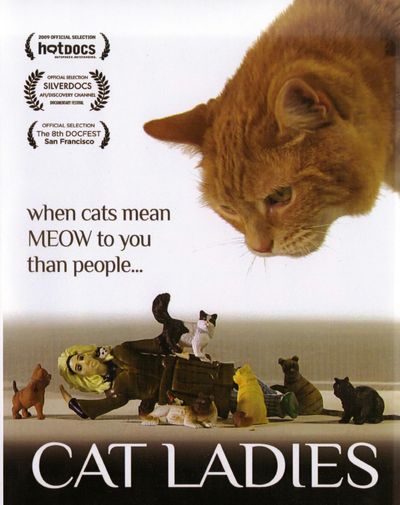