Film Review - Where the Wild Things Are

338 words. That’s all author Maurice Sendak employed over 33 pages to create a literary classic of childhood imagination. 338 words. An amazing feat and one that doesn’t lend itself easily to a feature-length film adaptation. Director Spike Jonze has a wealth of intention and imagination for his 95-minute embellishment of Sendak’s work, but fantasyland jubilation is an element oddly pinched out of this sulking haze of monsters and tantrums. A visual knockout, “Where the Wild Things Are” is cold to the touch, trying to surf confidently on rolling waves of childhood nostalgia and teary poignancy, but remains improperly balanced to handle the bizarrely leaden execution.

Young Max (Max Records) is facing the end of his innocence, with an older sister moving on to teen concerns, an education that promises the end of the world, and his mother (Catherine Keener), who’s trying to make sense of her job and love life. A moment of violent rebellion takes Max outside of his home and into the wilds of his mind, where he imagines a boat trip to a far away land inhabited by neurotic monsters. Meeting behemoths Carol (voiced by James Gandolfini), Judith (Catherine O’Hara), Ira (Forest Whitaker), K.W. (Lauren Ambrose), Douglas (Chris Cooper), and runt Alexander (Paul Dano), Max makes himself the king of the land, joining the monsters as they play and argue. However, leadership has its price, and the longer Max stays with the bickering monsters, the more he comprehends his misbehavior at home.

Long thought to be an unfilmable book, “Where the Wild Things Are” doesn’t strike me as something that required a silver screen conquering, providing a succinct exploration of juvenile anger and remorse on just a handful of magnificently illustrated pages. However, Jonze is a determined man, and through a meandering screenplay (co-written by Dave Eggers), the filmmaker has managed to stretch the material to a size befitting a motion picture event. I’m impressed with Jonze’s commitment to the scope and design of the film, but to find the filler that plumps up the sliver-thin narrative, the filmmaker reaches into his bag of gloom and oddity, molesting Sendak’s simplicity with winded pathos.

While Max is our guide to the outer realms of this expansive dream world, the monsters are the centerpiece, and the characters Jonze is most fixated on. A blend of Henson Creature Shop bodies and CG faces, the enormous inhabitants of Max’s subconscious are miraculous creations that respect the art of the tangible while engaging in seamless computer wizardry to lend the monsters divergent personalities. The creatures are all details and worry, with a magnificent voice cast providing a tender core to the herculean visual effort. Eschewing dynamic visual trickery in favor of roly-poly, wobbly puppet outfits, the monsters are rendered as real as monstrously possible, allowing Jonze to provide a certain threat for Max as he looks to win over his tempestuous friends. Acting more like “Jackass” cast members as they punch through trees, rubber-ball bounce around the wilderness, and enjoy a good dirt-clump fight, the monsters are easily the most technologically impressive screen effect of the year. Jim Henson would be proud.

Now, what Jonze does with his special screen achievement is another story. Max’s arc of rage to regret is a brief journey in Sendak’s book, and the screenplay is careful to maintain the role-reversal twist of the tale, where Max finds himself in a parental role with his persistent monster pals. Moving past Max’s responsibility proves to be more difficult for the picture, which seeks to fashion the furry co-stars as uniquely tormented souls who need the boy for enlightenment and reassurance. Instead of a joyful romp, Jonze aims his sniper rifle toward the heart, strumming the nostalgic strings of lost childhood and strain of friendship to build up some drama to pad out the running time. The monsters as individuals with hopes, suspicions, and fears is a wonderful idea, but the execution comes off labored, often showcasing the characters yelling at each other, a few moments hitting “Carnal Knowledge” levels of relationship ferocity. The monsters love and alienate easily, but there’s no real pull to their contention, wallowing in sadness, turning Sendak’s book into an emo beacon. The author celebrated the feral passion of youth. Jonze positively mourns it.

Boasting an outstanding production design, “Where the Wild Things Are” is a feast for the eyes. It’s magical in spurts, snatching the highlights of the book and making some terrific make-believe with jaw-dropping technical achievements. The substance between the marvel is another matter entirely. Spike Jonze obviously has his heart in the right place here, but extending something so perfectly concise, so willingly brief, to an absurd length invites more trouble than triumph. The rumpus runs out of steam quickly. 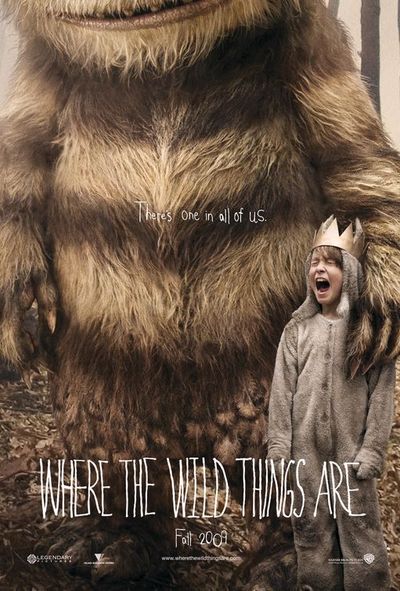