There’s no anniversary or birthday to celebrate here. Disney is just taking the “Toy Story” franchise out for a test drive, kicking the tires while “Toy Story 3” prepares to assault family moviegoing budgets next summer. Redressed in the trendy 3-D format, 1995’s “Toy Story” and 1999’s “Toy Story 2” are invading theaters again, this time as a snazzy double feature -- a multiplex value meal if you will. This rerelease allows audiences not only a chance to reacquaint themselves with lovable old friends, but also to view the vibrant Pixar-crafted toy world with an extra dimension, refreshing dusty animation with a welcome high-tech polish. 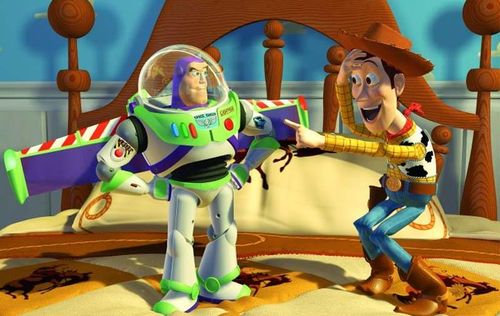 While helped along by an energetic marketing campaign and widespread media attention, “Toy Story” was still a major industry question mark when it opened in November of 1995. The first CG-animated feature film, “Toy Story” walked a very specific tightrope of expectation, introducing a cinematic tool and language that nobody expected much from. Upon release, the clarity was blinding: Pixar had created an instant classic set to revolutionize animated entertainment.

For the toys in Andy’s room, cowboy Woody (voiced by Tom Hanks) is king. As the leader and top plaything, Woody makes it his job to keep order among the plastic distractions, which include piggybank Hamm (John Ratzenberger), Mr. Potato Head (Don Rickles), Slinky Dog (Jim Varney), Bo Peep (Annie Potts), and neurotic dinosaur, Rex (Wallace Shawn). With Andy’s birthday comes the arrival of Buzz Lightyear (Tim Allen), a sci-fi action figure who has no idea that he’s just a toy. Stealing Andy’s attention, Woody grows jealous of Buzz, and, in an effort to get rid of the delusional spaceman, accidently jettisons him from the house. Hoping to rescue Buzz and restore what’s left of his reputation, Woody heads out into the world, finding a horror much worse than abandonment: vicious, toy-mangling neighbor kid, Sid (Erik von Detten). 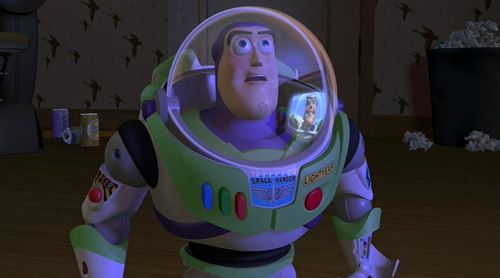 Now established as a brand name of sometimes exceptional family entertainment, Pixar was young and hungry during the first “Toy Story” years. The worry shows in the picture, which has remained the most free-spirited, hilarious, and poignant feature film to ever emerge from the studio. It’s a magnificent film, created with a then unproven playful spirit that merges broad cartoon antics with an endearing eye toward nostalgia -- the heartbreaking years when wonder turns to knowledge and maturation.

Director John Lasseter, working in a medium that had no established boundaries, shows such care for his characters, and that joy for this colorful spectrum of personalities leaps right off the screen. While tentatively luring and shaping the CG animation away from its short-film lineage, Lasseter deftly juggles the visual dexterity of the film with sucker-punch emotional content that has come to define Pixar’s touch, for better and worse. Woody, Buzz, and the gang are comedic devices with slapstick urges, but they also represent a potent nostalgic lightning strike for older viewers, inviting warm memories of afternoons lost playing with beloved toys. Lose the silliness and artful animation, and a core of crippling sentiment is left behind, nursed superbly by Pixar in a sparkling, innovative manner they’ve never matched. They lunged for the young and the young-at-heart with this one. What a brilliant way to kickstart a studio.

While the Pixar wizards supplied some amazing work here, the voice casting makes up at least 50% of the experience. A cornucopia of gracious, wry vocal performances, the cast of “Toy Story” reinforce everything Lasseter angles for with his direction. Can you imagine Woody without Hanks? Delivering some of his most cartwheeling acting as the disgruntled cowboy, Hanks makes “Toy Story” as engaging, uproarious, and convincing as humanly possible, spitting out the comedic venom and aw shucks resignation of Woody in a blustery, chirpy, projected performance that I’ve never been able to get enough of. Obviously it’s a tremendous, now-classic ensemble, and Allen is winning as the heroic, clueless space ranger, but Hanks devours the film as Woody, grabbing the biggest laughs and slam-dunking all lump-in-the-throat moments Lasseter throws into the mix. 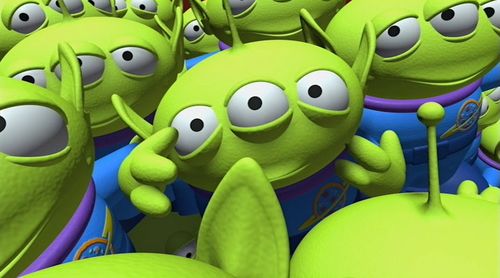 14 years later (ouch), “Toy Story” reveals some stiff animation and wonderful faith in cartoony behaviors. Those aren’t complaints, it’s more of a yearning for simpler times when Pixar was run in a state of panic and untested creativity, pouring its heart out into the unknown, with industry-dominating success only a pipe dream. “Toy Story,” with its frantic energy, earned pathos, demented touches, and a breakneck chase finale (a truly classic final reel if there ever was one), is such a pure offering of entertainment, losing none of its appeal over the years. Even the skin-crawlingly overplayed Randy Newman songs (the ubiquitous anthem, “You’ve Got a Friend in Me”) feel welcome in their proper screen placement. “Toy Story” was a surprise multiplex gift in 1995, and remains an exhilarating legend today.

And to think, all those years ago, some people swore a CG-animated film would never work.

Arriving four year later, “Toy Story 2” was rescued from the fangs of obscurity. Oddly imagined a lowly DTV title, Pixar woke up and seized control of the production, reworking the plot and refocusing its efforts on the film after “A Bug’s Life,” the shaky second project for the studio, proved itself able at the box office, further encouraging the company. Regarded by many to be something of an animated “Godfather II,” “Toy Story 2” always struck me as a disappointment. It’s a fine movie with plenty of spirit, but the franchise formula feels diluted, lacking the spark of creativity that made the original film sing.

Now the best of friends, Woody (voiced by Tom Hanks) and Buzz (Tim Allen) are faced with a unique horror when Andy’s mother starts collecting items for a yard sale. Hoping to rescue pal Wheezy from a discount box, Woody instead captures the attention of diabolical toy collector Al McWhiggin (Wayne Knight), who ends up stealing the rare cowboy doll. Taken to Al’s dwelling, Woody meets the other members of his toy line, including cowgirl Jesse (Joan Cusack), mint-in-box Stinky Pete (Kelsey Grammer), and lovable horse Bullseye. Off to save their pal, Buzz and the toys invade Al’s toy store and apartment building, looking to bring Woody back safely to Andy’s room. Woody, sensing his importance to the collector’s market and new family, finds he might not be as willing to return home as he once thought. 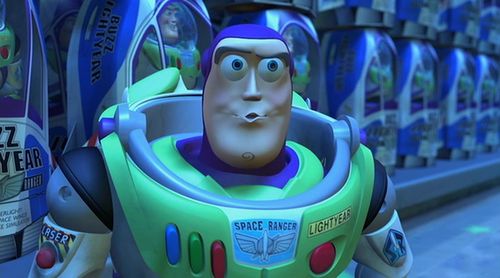 For “Toy Story 2,” the director’s chair was filled by three faces: John Lasseter, Lee Unkrich, and Ash Brannon, underlining the scattered origins of the picture. Lest this be an attack piece on an adored sequel, I found “Toy Story 2” improved immensely on a second viewing, a good decade after I walked away from the film deflated, hungry for something as magical as the original picture.

As continuations go, “Toy Story 2” has a lot to offer the eager viewer, sprinting back into the thick of toy anxiety with Woody’s departure, raising new questions of worth and home. Taking the collector angle, the sequel is afforded a fresh perspective to the toy game, with Woody allowed a chance to learn about himself and his past as a television icon, developing a combustible relationship with Jessie and Pete, who want to keep the cowboy around, or else back in maddening storage they go. While “Toy Story 2” rehashes much of the first film, Woody’s subplot inventively adds new dimensions to his personality, rubbing off a tone of abandonment that compliments the Jessie character.

While beautifully animated and endearingly performed by Sarah MacLachlan, the “When She Loved Me” sequence is one I’ve never been entirely comfortable with. It’s the squeeze of the picture; the sympathetic sweet spot crafted to both mirror Buzz and Woody’s internal struggles in the first film and inject gravity into an otherwise featherweight sequel. Yet, it’s a suffocating, calculated moment, pried into a film that required a more thorough development of significance. I don’t dispute the teary quiver of the song, only its heavy-handed use. Jesse’s aching desire to find a new home still registers strongly without it.

Matters get back on track with Buzz’s rescue adventure, finding the aware toy meeting one of his doppelgangers, thus finally giving him Woody’s perspective on his behavior from the earlier film. Buzz and the boys get all the action and humor, livening up the picture with a few animated stunts and frantic comedy. It can’t quite compete with Woody’s psychological awakening and eventual domestic longing, but the toys get something to do besides fret, creating some memorable set-pieces (the traffic cone bit is a classic) on their way to slapstick heroism.

“Toy Story 2” is cheery and familiar, which makes it a comfortable film, not always a thrilling one. It’s another lap with loveable characters, and there’s nothing wrong with that. I just wish the film expelled more effort to match the original picture’s lofty sense of wonder and generous sense of humor. “Toy Story 2” is Pixar becoming self-aware and guarded, and the caution reverberates throughout the film.

With the whole shebang clocking in at just over three hours (including a delightful, trivia-heavy 10 minute intermission), the “Toy Story” rerelease offers old fans new pleasures for this exclusive engagement. The 3-D makeover works splendidly, rendering the tiny creations with careful detail and concentrated scale -- the toys actually resemble toys here, walking on the tip of your nose for proper inspection. The 3-D event also allows an opportunity to experience the two pictures in an enviable communal atmosphere, where the public can assemble to laugh, cry, and cheer on these plastic worrywarts, returning the original magic back where it belongs: inside a movie theater. 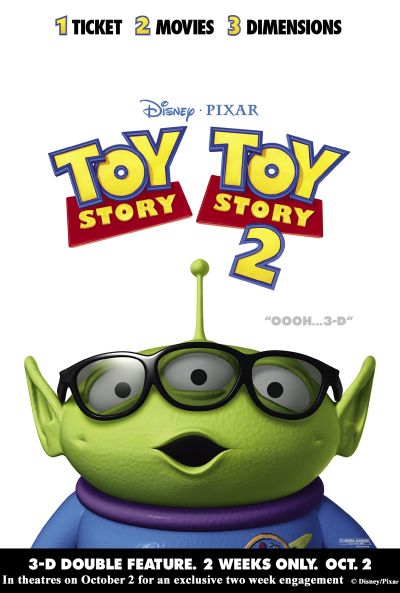