I walked out of a screening of “Saw” in 2004 absolutely appalled with the movie. Not for the sadomasochistic violence the film would soon popularize, but for the cruddy production value and the laughably abysmal performances -- Cary Elwes should be gifted a national holiday for his whimpering, career-smothering work, effectively neutering the repulsion of the ultraviolence. I loathed the film, yet watched with some degree of surprise as the franchise developed a defensive mainstream following; kindly folk who cheerfully hurdled generous filmmaking clichés and further acting decimation to bathe in the warm pools of blood, sucking up the suffering with a bendy straw as if the nightmare were Cherry Coke.

Round after round, they kept coming back, encouraging the producers to churn out product on a yearly basis (the filmmaking equivalent of a Twinkie). Who cares if the series makes only a modicum of sense anymore? Who cares if the screenplays have run out of ideas for shock value? “Saw” brings the pain; a comfy sweater film series for those who crave displays of agony. And now, my dear readers, we’re up to chapter six. An impossible number. Freddy went out in a hail of 3-D and goofy celebrity cameos at this point. Jason folded into a cartoon for his sixth adventure. But Jigsaw? He still has something to prove. As long as the box office returns flood the Lionsgate bank account every Halloween, nothing is going to kill Jigsaw. And “Saw VI” is further proof that the producers of this franchise are running on fumes, flailing hysterically to keep the momentum going, still beating a premise that was bled dry long ago.

Agent Strahm is dead, leaving Lieutenant Hoffman (Costas Mandylor) free to continue the sadistic work of Jigsaw (Tobin Bell), setting death traps and teaching lasting lessons of morality. For Jigsaw’s widow, Jill (the always welcome Betsy Russell), a box containing the final instructions of punishment from her dead husband has been opened, with orders to target William (Peter Outerbridge), an insurance executive who has denied important health coverage for the needy for years, including Jigsaw. Setting William up in a sophisticated obstacle course of traps and time-sensitive judgment calls, Hoffman is ready to initiate his own reign of terror, only to find the unfinished fragments of Jigsaw’s past coming back to thwart his new direction.

Yes, for the first Obama-era “Saw” picture, the producers have decided to take on the health care industry. This has to be the most ridiculously perfect timing ever encountered in the horror industry. Of course, this means “Saw VI” is less of a torture chamber and more of a medieval town square confrontation, where the wicked insurance ghoul is brought before the paying audience to be pelted with vegetables and scorn, leaving director Kevin Greutert the honor of a slow cinematic dismemberment. Now how’s that for a public option!

The health care angle for “Saw VI” is a wild one, but in the grand tradition of these sequels, the filmmakers haven’t a clue what to do with the eency weency spark of creativity they’ve stumbled upon. Instead, they smother the topical subject in familiar monkey business, literally retracing the previous pictures, retelling the same old story of withered, cancer-stricken Jigsaw and his craving to scare the life back into his victims. “Saw VI” hints at a drive to tie up dusty loose ends and tender some closure to those who’ve stuck around this long. However, a swan song this film is most certainly not.

Shamelessly repetitive, “Saw VI” reheats old conflicts, brings back an old character to panic Hoffman, and simply feels old all around. Five sequels in, and the producers are still milking Jigsaw’s message of redemption? What was once comfortably tedious is now deadly dull, and Greutert is no help, blindly sticking to the franchise formula to make it out of his directorial debut alive. It’s lazy filmmaking all around.

The second half of “Saw VI” pits William against his vicious challenges, allowing the audience to root for the traps as they aim to chomp the money man’s limbs away. The extremity of the violence here is more cartoonish than ever before; the production is desperate to stay one step ahead of the audience by mounting more outlandish traps that necessitate the worst acting imaginable. The bloodletting is grandiose in “Saw VI,” but strangely uneventful. You know you’ve seen one too many of these films when the sight of man hacking away at his own engorged stomach with a rusty knife elicits a yawn and a quick check of the wristwatch. It seems vile of me to even suggest it, but the intensity of “Saw” is gone, replaced by predictability for installment six. The work of the devil now feels like senseless padding to make a feature-length running time.

While declarations of finality are tossed around liberally by the characters, “Saw VI” ends with another cliffhanger, assuring that the Jigsaw train will make a future stop come Halloween 2010. Would it kill these producers to take a few chances for the next adventure? It’s easy to loathe a “Saw” picture, but to be utterly bored by one seems an unpardonable offense. 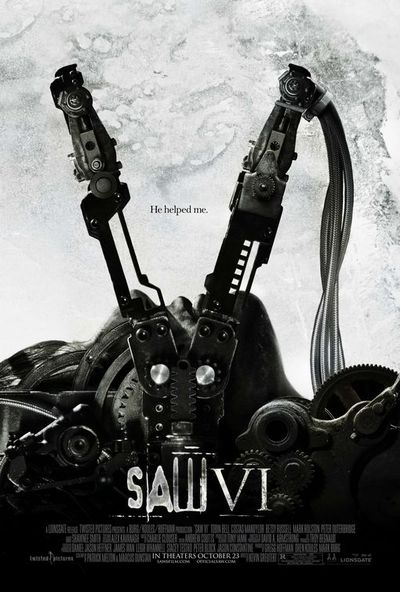