Film Review - Michael Jackson's This Is It 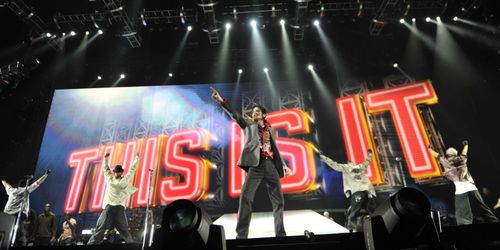 The title is not “This Is It,” as in the hottest ticket in town. It’s more “This Is It,” admitting a scarcity of content. Marketed as the final goodbye to the self-proclaimed “King of Pop,” this hastily assembled performance film seems less like a eulogy and more like a chance to cover the losses incurred when Jackson died during rehearsals for his pricey comeback tour. The stank of opportunism is all over this baby, and while I wouldn’t begrudge the average superfan their chance to publicly mourn, “This Is It” takes Jackson’s musical legacy and squeezes it for every last remaining nickel.

From April to June 2009, Michael Jackson held rehearsals for his “This Is It” megaconcert in Los Angeles, renting out an arena to work out the complex choreography and sound cues needed to bring his vivid imagination for showmanship to life. Backed by a throng of zealous dancers and awed musicians (along with director Kenny Ortega), Jackson trotted out over 20 of his greatest hits, repetitively walking through the songs to make sure the details were in perfect place for this, the most important and financially lucrative concert stand of his career. Behind heavy makeup and oversized sunglasses, Jackson presided over the effort, desperate to give his fans a mind-blowing performance that would live up to his legend.

And then Michael Jackson died, mere weeks before the whole endeavor was to commence.

Flush with rehearsal and backstage footage commissioned by Jackson for personal study, Ortega and his editors have decided to turn tragedy into a fresh revenue stream. Now that’s the cynicism rising up inside me, but after watching “This Is It,” I fail to see a reason why a tedious collection of practice sessions should pass for a proper farewell celebration. Sure, there’s the novelty of watching Jackson inches away from the grave, moonwalkin’ and crotch-grabbin’ like there’s no tomorrow. And then there’s the cold reality of the footage, which displays Jackson half-heartedly running through his chart-toppers, at times barely singing along, looking to save his airy voice for the big debut. The cameras used here are commercial-grade (not powerful HD machinery), Jackson is rarely viewed in close-up or without his facial protection, and the songs are limply performed. Surely there was a better way to capture Jackson’s musical tenacity than a slapdash compilation of rehearsals.

The only benefit of the footage is witnessing how Jackson designed the arena experience, instructing his employees with equal parts insistence and patience (always chased with a “God bless you”). Ortega manages to work in a few choice moments of the singer feeling out the beats, and while brief, it’s fascinating to watch Jackson hiccup and jitter his way through the tunes, deploying his famous moves to fit a new stage of opportunities. Ortega is always there, the endless yes man who needs Jackson as happy as can be, representing the ugly sycophantic mentality that ultimately drove the gloved one to his grave.

“This Is It” tries to fatten the shallow experience by including video clips of the concert that never was, showing off the short films Jackson was working on (“Smooth Criminal” features the singer interacting with Rita Hayworth and Humphrey Bogart, “Thriller” comes alive again as a 3-D spectacle) and crude CG-animated concepts to help to understand how the show was meant to be seen. Threadbare interview footage is included as well, but only adds more fawn to the fire. Ortega works up a sweat manipulating “This Is It” into a cinematic event, but it’s an unfinished symphony, and a marginally tacky one at that.

Courtrooms and plausible rumors aside, Jackson deserved something booming and blinding to send his legacy into orbit, perhaps a documentary of some type that might gift the devoted a lasting image of pop culture supremacy. “This Is It” is strictly pressed factory floor sweepings, packaged and sold with questionable intent to a public aching for closure. 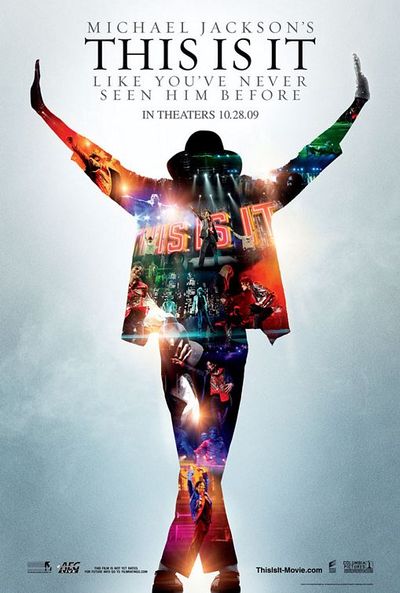 In my opinion this is a terrible review... I haven´t seen the feature yet, and certainly as I read this review, it feels the reviewer was expecting a new Moonwalker movie or a great concert to show -and I quote: "a lasting image of pop culture supremacy". I´ve been looking forward to see the "movie" to know a little bit of what i can´t see in any MJ's DVD available out there. To get to know the man behind the showman, this is the original intention of the film and the reason I still look forward to it, since this review confirms that intention. I´m no MJ fan, but am very curious to know more about him, since I believe he was a very misunderstood person, this review also confirms that for me. No offense for the reviewer, just another opinion.

Right on! Jackson deserved more than this. It stinks of greedy people trying to make even more money off of this poor man.

If Jackson saw this would he be proud?! There's no way. As a fan I'm always game for seeing more behind the scenes, but not when it's produced by people with their own interests at heart and not Michael's...

Excellent review. It's refreshing to hear n objective view in a sea of lemmings.