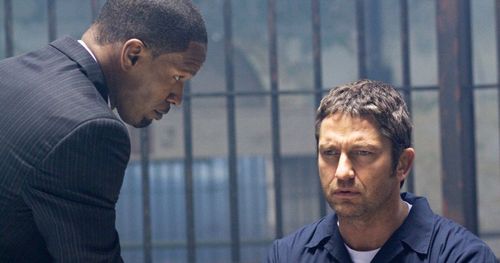 The thriller “Law Abiding Citizen” has the stink of a great exploitation experience all over it. Sections of the film demand audience interaction -- the popcorn-throwing kind that greets cruel turns of fate or broad displays of injustice. When “Citizen” stays in that pocket of unsophisticated manipulation, it puts forth terrific genre energy guaranteed to get the adrenaline racing. However, leave it to the filmmakers to get in the way of a decent film, trying to outwit an audience that just might prefer the simplest ride available.

Having witnessed the murder of his wife and daughter, Clyde Shelton (Gerard Butler, destroying an American accent yet again) is ready for justice to be served. Up and coming D.A. Nick Rice (Jamie Foxx) is in charge of the case and eager to make a deal with one of the brutes to send the other to death row. Clyde, witnessing his dreams of justice expire, walks away, allowing Nick to carry out his plan. 10 years later, the two killers end up murdered in gruesome ways, with Clyde the only possible suspect. Instigating a psychological war with Nick, Clyde demands a new type of justice, mysteriously reaching out from behind bars to systematically torment everyone associated with his case (including Leslie Bibb and Bruce McGill). Nick, fearing for his life, races against the clock to crack Clyde’s master plan before he targets his wife and child.

When “Law Abiding Citizen” feels comfortable enough to be a blunt object of suspense, it comes together splendidly. Pitting the harsh realities of the modern justice system against the suburban cry for blood from a soccer dad, Kurt Wimmer’s screenplay nurtures a pungent odor of injustice that sets up the plot in an exhilarating manner. Morally frozen lawyers? Tired, careless judges? Wimmer manipulates audience reaction superbly, bringing the story to a wonderful boil as Nick stands firm to his case-winning percentages and Clyde sulks away, beaten down by the system that was supposed to heal his aching heart. Now there’s a proper set-up for a bracing thriller that respects the fine art of revenge. 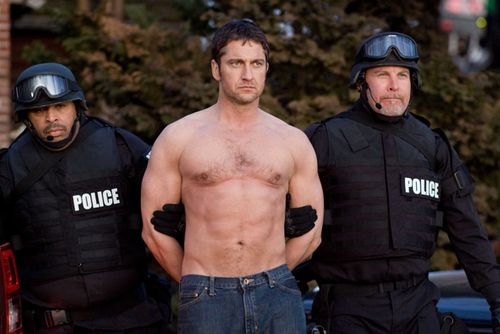 Unfortunately, “Citizen” doesn’t follow through with its corker of a first act. Director F. Gary Gray toys with the audience for fair amount of the running time, building the characterizations of the two men as they disagree on what the punishment should be. Staying put with Nick the ladder-climbing opportunist and Clyde the meek idealist provides the film with a sensational, unfussy pulse of tension. Wimmer and Gray don’t trust that simplicity, and they overreach to contort “Citizen” from a solid thriller to a surprisingly violent thrill ride.

You see, Clyde has a secret. All men do. Yet, Clyde’s secret scrubs away the film’s sense of realism and suggestion of fair play. By turning Mr. Rogers into Jason Bourne, the sensation of surprise is smothered. Suddenly everything is larger than life, and Clyde’s symphony of revenge plays out like a typical action film, not a sinister pageant of dark justice. Wimmer dreams up one whopper after the next to keep the film rolling, enthusiastically turning “Citizen” into a sci-fi film of sorts with its extreme sequences of comeuppance. By the time a robot shows up in a graveyard to mow down the greater Philadelphia D.A. office, it’ll take a heavenly force to keep most eyes from rolling.

By the final reel, “Citizen” has shed all of its thought-provoking material, morphing completely into a contrived thriller that doesn’t fully understand how to close on a satisfying note. Instead of a wicked game of mental chess, we get fireballs. “Law Abiding Citizen” takes the easy route out, assuming that flagrant manipulation requires a cartoon hand. All it really needs is confidence, patience, and someone to boo. 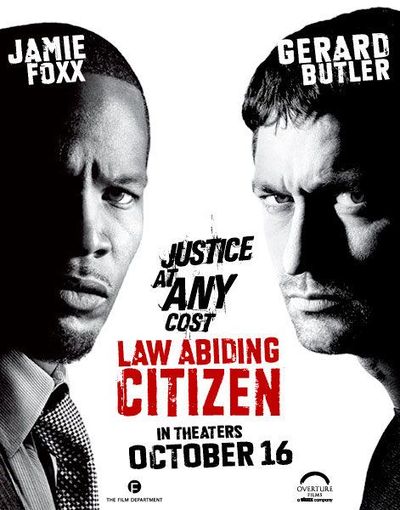