Adapted from the celebrated, long-standing manga series, “Astro Boy” aims to make a big dent on the big screen with this CG-animated spectacular. Boasting glossy visuals, red-hot action, and a sparkling cast of voices, the film is ready to please, but the end product is perhaps a step too bizarre and cartoony to leave a lasting, awe-inspiring impression. It’s a great character and an impetuous movie, but with all the attention placed on keeping the animation energetic and the actors satisfied, someone forgot to straighten out the erratic tone of the picture.

In Metro City, a metropolis hovering high above a polluted Earth, Dr. Tenma (voiced by Nicolas Cage) is preparing to experiment with a pure energy source intended to enhance the city’s overflowing robot population. When wicked President Stone (Donald Sutherland) assumes control of the energy, an accident occurs, killing Tenma’s son (Freddie Highmore). Racked with grief, Tenma decides to use the special power to fuel a robot replica of his beloved child, but the boy’s artificiality only deepens the doctor’s depression. Cast down to Earth, the boy, rechristened Astro by a gang of pre-teen salvagers and their makeshift guardian, Hamegg (Nathan Lane), grows to love treatment as a human, but when Stone rises up again to claim power, Astro must embrace his robotic roots to save humanity.

“Astro Boy” comes from Imagi Animation Studios, who last gave the world the wonderful “TMNT” CG update. If there are any absolutes about this film, it’s the striking animation. Granted, Imagi doesn’t have the budget or the manpower to compete with Pixar and Dreamworks just yet, but their minimal-coin work on “Astro Boy” is nicely futuristic and clean, with expressive body language and outstanding kinetic energy for the action sequences. The picture is fun to watch, and director David Bowers (“Flushed Away”) builds a few exhilarating sequences to show off the CG work, the highlights being the flying excursions where our hero learns of his rocket-feet gifts.

While Bowers can assemble superhero wonderment, managing the numerous moods of “Astro Boy” proves to be an impossible task. Here’s a film that opens with the death of a child, yet insists it’s this wide-eyed, banana-peel cartoon, ushering in a series of wacky characters and slapstick to offset the potential emotional starkness of the material. The additions are poorly selected, ranging from a group of communist robots intent on leading a synthetic uprising to the squad of “surface” kids Astro befriends, who live in a semi-Dickensian wonderland under Hamegg, with one of the group admitting illiteracy. Of course, in the grand tradition of good taste, this leaves Bowers with no choice but to make fun of their inability to write.

“Astro Boy” settles into a routine of the awesome and the awful quickly, though it’s disappointing to see the bad decisions win out in the end. The President Stone character is a prime example of the lousy screenwriting. A Bush-era, war-crazy baddie who’s on a fear mongering crusade to secure re-election, Bowers turns the menace away from horror to comedy, trying to lighten up the picture by urging Sutherland to ham it up (always a rotten idea), making obvious and spastic jokes when a nice coating of subtlety might’ve brought the film interesting dimensions. By nudging the picture into primary colors, “Astro Boy” loses a shot at an intriguing personality. A little sustained darkness never hurt anyone.

A colorful voice cast (including Bill Nighy, Charlize Theron, Kristen Bell, David Alan Grier, and Eugene Levy) offers something to savor while the film struggles to find its footing, but this update of a classic animated character lands with a thud. A promise of a sequel at the end of the film (where our now shirtless boy-hero tears off into the sky) remains an unlikely prospect, but if there must be further Astro adventures, let’s hope the filmmakers stick to heroic feats of strength and aerial ballet over awful stabs at comedy. 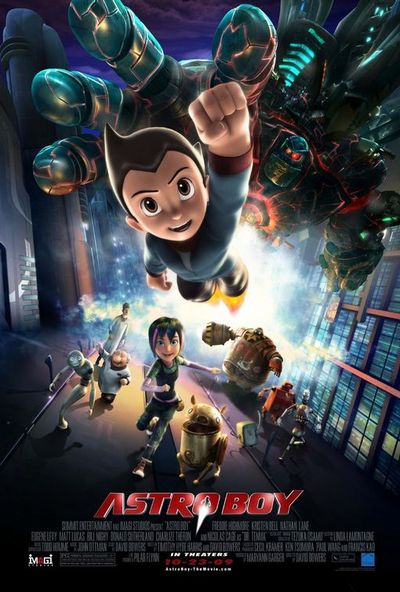