Oh, what a bizarre film “Stunt Rock” is, but its oddity is a gift. More of a bruising cinematic experience than a narrative-driven feature film, “Stunt Rock” is the 1970s packaged up to near perfection, combing the hurricane forces of daredevil filmmaking and shtick-laden heavy metal. Brian Trenchard-Smith’s masterpiece of stackable-amp cinema is such a carefree, tinted-shades delight, it’s nearly impossible to convey its widescreen enthusiasm on the page. It’s a shapeless experience, but an exceptional ride that offers thrills, grins, and an impressive argument for the supremacy of Australian cinema during the 1970s.

Stunt man extraordinaire Grant Page has come to Los Angeles to help out a feature film starring a nervous leading lady, Monique van de Ven. Invited to the set is reporter Margaret (Margaret Gerard), who takes a keen interest in Page and his lifestyle of near-death experiences, all captured on film. Following Page around as he works and plays in L.A., Margaret also meets the rock band Sorcery, who employ their mastery of metal and magic to wow audiences. With Page as her guide into the intricacies of stunt work, Margaret digs deeper, educating herself on Australian stuntmen and their extremely hazardous accomplishments.

The above paragraph is somewhat misleading since “Stunt Rock” doesn’t contain much of plot at all. Trenchard-Smith seeks out a bronzed you-are-there momentum, deploying Margaret as a surrogate for the audience, discovering the daily business of danger and performance. The casual feel works outrageously well for the film, which displays a wild set of images and sounds without the burden of connection, leaving the sheer amazement and peculiarity alone to sink in naturally. Trenchard-Smith isn’t here to pound the viewer with misguided structure, he just wants to throw a party, and we’re all invited.

Admittedly, “Stunt Rock” fatigues long before it’s over, but the initial blast of images and derring-do carries the film all the way to the end. Meeting Page as he prepares a harrowing zip-line cliff dive (you can see the smoke wafting off the burning rope), “Stunt Rock” introduces our hero in a grand style befitting a king. Granted, a king perhaps a vast majority of viewers have never heard of before, but that’s the idea of the film: to highlight the efforts of the daredevils that step in front of the bullets, jump off the buildings, and ride on top of the cars. This being 1978, there’s no CGI to help out here, and wires are in short supply. Page takes to land, sea, and air armed only with his wits and experience, and he’s a marvel to watch. Trenchard-Smith rouges up the footage with a liberal use of split-screen and slow motion, but the primal awe of watching Page plummet and burn is preserved. It’s a thrilling display of grandiose bodily endangerment that doesn’t come around nearly enough anymore.

How Sorcery factors into matters is a little confusing, but for fans of magic and thundering arena rock, these guys are quite entertaining. It’s a band comprised of long-haired rockers, a keyboardist in a mask, and two members dressed up at Satan and Merlin. Conducting battles between good and evil onstage, Sorcery is a mix of KISS and Doug Henning, using the art of illusion and the intensity of pyro (fire is the unofficial sponsor of the film) to underline the Tolkienesque lyrics. The performance sequences arrive indiscriminately throughout the film, but the blast of wizard-sleeve hellfire and teeth-rattling metal sludge is irresistible, further thickening Trenchard-Smith’s bubbling cinematic stew.

The good news is that “Stunt Rock” is presented in anamorphic widescreen (2.35:1 aspect ratio), preserving all of Trenchard-Smith’s amazing visuals. The bad news is that the transfer here is a muddy mess, lacking a proper restorative effort to offer DVD consumers a clean viewing experience. Code Red’s limited coin and the film’s obscurity easily explains the image quality, and I feel the scruffy appearance adds to the undiscovered gem quality of the picture. However, with smeared colors, blobby black levels (low-light sequences turn into a radio play), and a slightly out-of-focus sensation to the presentation, it’s hard to give the DVD a passing grade. It’s wonderful to have the film finally released to American audiences, but more work was needed to bring “Stunt Rock” up to the extraordinary standards of DVD exhibition.

A 2.0 Dolby Digital mix provides the necessary thump to the film, with Sorcery tunes taking on a delightful power that shakes the entire film. Dimensionality is not on the menu here, but more of a frontal assault of thick, bass-happy songs and dialogue exchanges. Crowd atmospherics add to the cacophony, creating a wall of sound that works for the motion picture (again adding to the drive-in feel of the film), but might keep audiophiles in a cold sweat

The first feature-length audio commentary brings director Brian Trenchard-Smith and actors Grant Page and Margaret Gerard to the microphone. What a wonderful track this is, led by the filmmaker who carefully explains background information and motivations for nearly every sequence. Trenchard-Smith remains delightfully conversational with Gerard (who loves to point out her own screen awkwardness) and Grant (offering technical insight), lovingly deconstructing his own film. Few dead spots are present, and the chat remains on target the entire time. Amen.

- A young Phil Hartman cameos, part of a larger group of Groundlings cadets that filled in as extras.

- The film’s ample use of split-screen was a necessary tool to fit in various 16mm footage into the scheme of things.

- Foreigner was the original choice for the band role. Trenchard-Smith is eternally grateful his first choice didn’t work out. Later on the disc, he mentions Van Halen was offered to him as well.

A second track features Trenchard-Smith, producer Marty Fink, and actor Richard Blackburn. The lesser of the two commentaries, much of the info here is repeated from the first chat. While somewhat more political and sedate, it’s purely for “Stunt Rock” completists.

“On-Camera Interviews” sits down with Brian Trenchard-Smith (32:33), Smokey Huffs (26:47), Richard Blackburn (5:41), and Marty Fink (3:21) for a further exploration of “Stunt Rock” history. Huffs, the guitarist for Sorcery, is perhaps the treasure of this supplement, discussing the band’s origins, influences, and appearance in the film.

“Perry Morris” (22:00) is an audio-only interview with Sorcery’s talkative drummer, providing a different look at the band’s participation in the picture and how the guys got together. Morris is spirited and informative, still marveling over the cult success of the film.

“The Stuntmen” (48:40) is a documentary short directed by Trenchard-Smith in the early 1970s, used as inspiration for “Stunt Rock.” For stunt enthusiasts, this is a pure delight, putting focus solely on the harrowing work of the men who eat danger for breakfast.

“Evening at the Alamo Drafthouse” (24:45) showcases Trenchard-Smith during various onstage Q&As, collected in September 2008, during the Fantastic Fest genre film festival. There’s a lot of geek love and geek questions, and the filmmaker takes all the adoration very well.

“Original Cannes Promo Reel” (18:43) is a diverse collection of sequences used to help sell the film, topped off with overtly energetic voiceover work.

“Stunt Rock” offers some history on Australian stuntmen and famous crash-intensive movies, and, for those able to appreciate such things, there’s a dune buggy sequence to show off Page’s rowdy private side. Scored to Sorcery’s bottom-heavy music (the anthem “Stunt Rocker” is superbly woven throughout the picture), the film has no difficulty creating an explicit atmosphere of peril, and Trenchard-Smith’s direction, while easily distracted, is stunningly evocative and blissfully obsessed with the fine details of destruction. “Stunt Rock” is an acquired taste, no doubt, but the mood is a convincing mess of spills and ear-splitting metal, capturing a special moment in entertainment history when the two pastimes felt naturally joined at the hip. 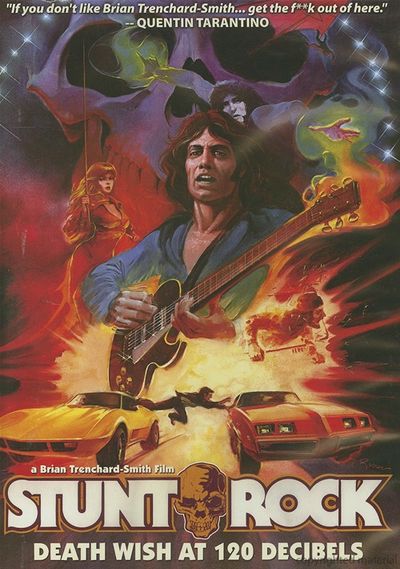