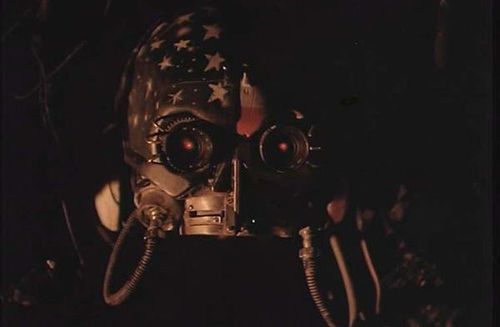 When “Hardware” slipped into theaters in the autumn of 1990, I was much too young to see it, unable to properly grasp its European cinema homages and suffocating future shock textures. I simply hated the thing, tremendously disturbed by its brutal imagery and salacious appetite for perversity. Fortunately, I wasn’t unable to flush the feature out of my system. With time and maturity, I grew to value Richard Stanley’s feature as a fierce, enthralling depiction of utter ecological and social anguish. “Hardware” slowly became a personal favorite, and nearly 20 years later, it’s finally arrived on a format that permits clarity to the fine details and piercing discomfort Stanley busted his hump to produce.

Returning from military duty in the irradiated wastelands, Mo (Dylan McDermott) has come to visit his estranged lover, Jill (Stacey Travis), in her apartment, smack dab in the middle of an overpopulated, diseased city. Bargaining with a whacked-out salvage hunter for a bag of robot fragments, Mo offers Jill the findings, which she uses for an elaborate abstract art project. Settling in and reconnecting after a long absence, the party for Jill and Mo is cut short when the robot awakens, reassembles itself with nearby parts, and resumes its original purpose as a government-sponsored population control droid. As the “M.A.R.K. 13” tears through the apartment exterminating anything in its path, Mo and Jill attempt to survive the night, searching for a weakness that could stop the metal predator.

Stretching his limited budget to extraordinary lengths, “Hardware” is a miniature horror picture that dreams pretty big. Taking the viewer into a grim future world of blood-red skies, radiation poisoning, and population control efforts, Richard Stanley doesn’t spare a drop of discomfort, imagining a planet plummeting straight to Hell, with the survivors living in a humid, lawless world of perpetual self-medication and surveillance. It’s a frightful noose-around-the-neck premise, and in lesser hands the material would’ve surely crumbled into clumps of shock value and half-assed gloom. However, Stanley captures the catastrophe with youthful abandon, constructing an art-house, sci-fi gorefest that welcomes all this dystopian hopelessness with cigarette-stained jazz hands, stylishly making depravity his pet.

While the temptation to kitten the material must’ve been there for the taking, Stanley avoids a crude, B-movie routine for “Hardware.” It’s a glossy, moody picture, utilizing Simon Boswell’s wonderfully despondent synth-n-slide-guitar score to create an atmosphere of apocalyptic misery that delights the filmmaker, further accented by the ingenuous usage of the grinding song “The Order of Death,” Public Image Ltd.’s timeless valentine to the end of the world. Stanley creates the sensation of a plastic bag slowly pulled taught over the face, fashioning a disturbing world where a killer robot is perhaps the last thing to be feared.  It’s an overpowering, toxic community of perverts (William Hootkins induces nightmares and post-screening showers as Jill’s greasy, voyeur neighbor), opportunists, media ubiquity, and cold-blooded murder.

The miracle here is how “Hardware” never buckles under the weight of its humorless, demented frame of mind. Stanley, only 23 years of age at the time of production, shows a sure directorial hand, merging the genre’s bottom-shelf requirements for vicious violence and terror with fascinating aspects of social commentary and biblical awakening that add layers to what normally would be a customary sci-fi shocker. Stanley’s thinking with “Hardware,” not just responding, and while the abrasive results don’t always penetrate like they should (Mo’s confrontation with the machine lacks the concise finality the rest of the feature enjoys), the hellacious strength of the picture is quite amazing at times.

Presented with an AVC encoded image (1.85:1 aspect ratio), “Hardware” makes an assured debut on the BD format. Having viewed the film during its lukewarm theatrical run, on a muddy videotape, and a cruddy laserdisc, this Blu-ray is revelation, bringing a thrilling clarity to the picture that I’ve never witnessed before. It’s not all roses, with a scratched print and some minor contrast issues, but the majority of the presentation is terrific, allowing the frame a level of detail that almost alters the viewing experience. Colors are superb, retaining a sickly glow that contributes to the discomfort. Skintones and facial detail are reasonably maintained, making Hootkins’s aforementioned deviant even more foul. The film’s abundance of filters remains solid as well. The image looks sharp without sacrificing the sci-fi grit, and the bloodshed maintains the goopy particulars. “Hardware” has finally found a proper home.

The Dolby Digital 5.1 sound mix doesn’t exactly live up the potential of Blu-ray, yet the contained nature of the track accurately fits the mood. Throughout the film, the dialogue is fighting to be heard, though the mix offers reasonable separation, revealing the film’s rather extensive use of looping to combat the noisy locations. Apocalyptic atmospherics seep into the surrounds during exterior scenes, along with robot nuances and futuristic chirps. Soundtrack cuts are crisp and enveloping, extending the mood further. The track reflects the low-budget nature of the film. It can be thin, but it’s rarely disappointing.

A feature-length audio commentary with filmmaker Richard Stanley should be a required listen, if only to hear an impressive discussion of intent from the man who’s lived with the film’s bizarre history for 20 years. However, Stanley is a somewhat smug personality speaking with a clipped monotone, making the track more of a dry listen. Still, the conversation reveals “Hardware” production tidbits left and right, with an interviewer helping to massage Stanley’s memory. The filmmaker’s intention is clearly illustrated on the track, and it’s fascinating to hear Stanley describe his battles over content with producers Bob and Harvey Weinstein (who pushed for Mo to be more likable), his obsessions with Holocaust footage, and his opinions on how the film fits into today’s world. Stanley’s not the sunniest fellow, but he stays alert, making the commentary a valuable experience.

“No Flesh Shall Be Spared” (53:59) is an outstanding making-of odyssey, gathering interviews with cast and crew to help comprehend how “Hardware” came to life. While A/V quality ranges wildly from subject to subject, the information passed along is pure gold for any fan of the film. Talking with Stanley (surrounded by flies), producers, cinematographer Steven Chivers, composer Simon Boswell, and actress Stacey Travis (McDermott is sadly absent), everyone seems to have a fondness for the picture, gleefully discussing the intensive shooting process in England and Morocco, and how they made something incredibly ambitious for an unforgiving budget. Travis is easily the most animated of the group, and she’s a wonderful source of anecdotes. Further delight is added by the brief inclusion of BTS footage, showing a much younger cast and crew working out the details. Again, Stanley is the sour element, but that seems to be his general pessimistic personality.

“Deleted and Extended Scenes” (25:02) are taken from an ancient, ratty VHS source, showcasing unfinished moments of relationship woes with Mo and Jill, further robot stalking with Jill (who hides inside a refrigerator for an extended attack sequence), and various takes of Hootkins meeting his Venetian blind fate.

“Richard Stanley on ‘Hardware 2’” (7:40) brings up a sore subject for the filmmaker, who clearly was raring to embark on a follow-up, only to see the picture lost to a never-ending parade of copyright disputes. Stanley communicates a basic outline of the story, but seems more interested in discussing military tech leaps than the sequel that never was.

“Incidents in an Expanding Universe” (44:30) is a Stanley short film, which served as the inspiration for “Hardware.” An exquisitely produced Super 8 production (made when the director was a teenager), the film is crude but effective, providing an extra layer of entertainment value just to spot what ideas made it into the feature film.

“Rites of Passage” (9:50) and “The Sea of Perdition” (8:33) are two Stanley short films further illustrating the director’s keen eye for sci-fi imagery.

A German Theatrical Trailer and “Hardware” Promotional Trailer are included.

I wouldn’t brand “Hardware” a classic, but it burns with a caustic personality, elevating itself miles away from the robot rampage routine. Richard Stanley infuses the picture with stunning threat and a beguiling industrial personality, molding schlock into a potent futuristic warning shot. Nearly two decades later, “Hardware” retains its merciless poise, and while the filmmaker has slipped into obscurity, his finest work still lunges for the throat. 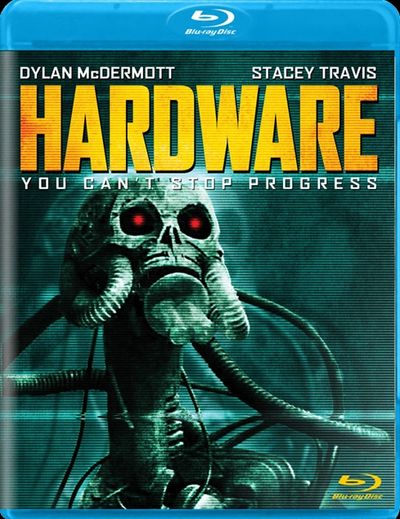