Film Review - Tyler Perry's I Can Do Bad All By Myself 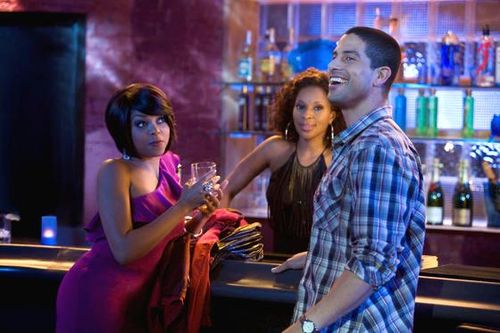 Last winter, Tyler Perry suited up inside his Madea character and made a fortune. “Madea Goes to Jail” was a box office smash for Perry, bringing his cross-dressing, slang-heavy shtick close to the 100-million-dollar barrier required for worldwide box office legitimacy. Smelling blood in the water, Perry has hastily brought back the character for “I Can Do Bad All By Myself,” though the sassy, gun-toting, breast-swinging matriarch carries more of a cameo role here (shhh, don’t tell the Lionsgate marketing squad). Without or without Madea (ideally without), “Bad” is the same old moldy dish of melodrama and misbegotten salvation, spoon-fed to the Perry faithful without much care for appealing artistic development.

Catching a group of kids (including Hope Olaide Wilson) breaking into her house, Madea (Tyler Perry) grows irate with their attitudes, calling in their estranged aunt, April (Taraji P. Henson), to assume responsibility and watch over the gang. Fearful guardianship will interfere with her alcoholism and future with her married boyfriend (Brian White), April resists the offer every step of the way. Moving into her house is Sandino (Adam Rodriguez), a South American immigrant looking for shelter in exchange for his handyman skills. Immediately taking to the kids, Sandino watches as April loses herself to depression, while the church-based community (including Gladys Knight, Mary J. Blige, and Marvin Winans) rallies around her in this special time of need.

You know, Perry almost won me over with this picture. His seventh directorial outing, “Bad” hits a few grace notes in the early going, charmingly developing April and her dismissive, indolent ways. The paradise is short lived, as it’s only a matter of time before Perry loses interest in these strange new directions of characterization and wants to stick to the formula that’s made him a fortune. I can’t blame the guy, but it’s discouraging to watch “Bad” build an unusual rhythm in the opening scenes only to stop itself and sprint back into Madea/preach mode, where the uncomfortable marriage of Jesus and domestic violence reigns.

The Madea scenes are the Madea scenes, predictable in their execution and excruciating in length. With “Jail” behind him, Perry makes it a point to linger on Madea while she’s around, even if the character has nothing to add. A threat of violence, a comical mispronunciation, and some glaring is the standard Madea equation, and “Bad” is thrilled to include the hulking mama in on the story, even if there’s zero reason for her to hang around. Madea’s cameo is brief, but should satisfy fans, especially when it comes time to settle in with April’s tale of woe, only to find there’s little in the way of dramatic meat to chew on.

“Bad” is a thin, scattershot picture, which explains Madea’s appearance and the film’s numerous performance sequences. What, did you think Perry hired Knight and Blige to act? Everyone gets their chance to sing for the camera, including Winans, who hijacks the film for a six-minute sequence of preaching, morphing the film from “I Can Do Bad All By Myself” to “Church: The Movie.” Obviously, having Knight around adds some star power to the proceedings, and Blige does here what she does best: sing like she’s got a bomb strapped to her chest. However, the tunes halt the flow of the movie, revealing that perhaps Perry didn’t have much on the page for this outing, leaving him to struggle to fill the gaps. April and the kids almost feel like an afterthought in the feature, which jumps from idea to idea with little connective tissue.

Romantic entanglements soon develop for April and Sandino, blurring the film’s focus further. Perry uses White to clear up matters some, depicting his character as evil incarnate to allow the audience a crater of obviousness to jeer. White is appalling in the role, turning on the cartoon high beams and spending much of his screentime reminding everyone how lousy a filmmaker Perry can be. His character also ties into the disgusting Perry staple: violence as a solution. All this talk about betterment and Jesus, amplified as forcefully as ever, and Perry still licks his lips at the thought of torturing the bad guy.

“I Can Do Bad All By Myself” doesn’t take long before it starts walking in established Perry footprints, gently nudging Henson’s performance from a place of absorbing irritation to the bosom of hysterics, carefully snuffing out whatever spark the film initially enjoyed. Tyler Perry remains a lazy filmmaker and an unconvincing actor, but the man knows his audience, serving up a dismally familiar goulash of Christianity, comical violence, and unfortunate soap opera he’s built a kingdom upon. 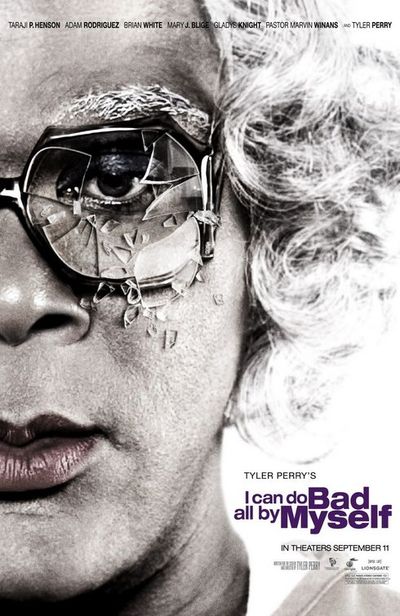 Dang...I kind of thought this would be the Tyler Perry movie that would actually be good. Oh well. When's the next one coming out? A few months? I can wait.

As a side note, is that really the poster they used?! Who greenlit that?! It makes it seem like this is the movie in which Madea gets killed by a stray bullet...really really creepy...

I think Adam Rodriguez is a horrible actor and saw no need for him to be in this film at all.

I actually enjoyed the film---some of it did seem canned and awkward, but Hope Wilson's and Taraji P.'s performances were phenomenal, and Rodriguez was warm and sincere as her companion. Looking forward to "Why Did I Get Married 2" in 2010!