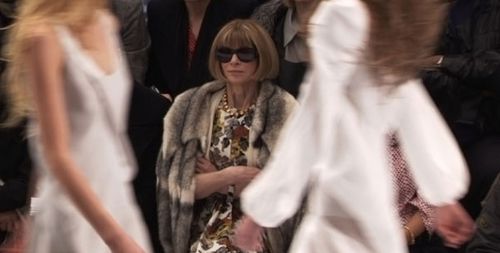 Putting together a magazine has always appeared to me to be an impossible gauntlet of stress and dedication. Assembling the obscenely high profile fashion bible during its largest issue is a proposition fit for the loony bin. Enter Anna Wintour, the editor of Vogue, and a woman of precise temperament and icy control. Dispatching her underlings, photographers, and models early in the year, Wintour begins to assemble a phone-book-thick beast of a magazine, created for a prime, exalted month devoted to the next big waves in fashion and celebrity. It’s known worldwide as “The September Issue.”

Director R.J. Cutler was granted astonishing access to the bowels of Vogue during the 2007 ramp-up to the launch of the September Issue. It’s a remarkable achievement, not only as an opportunity to observe the working parts of the influential magazine and its daily business, but to spy Wintour in action. A frail-looking fashionista found somewhere inside her trademarked curtain-thick bob, Wintour is the enigma Cutler is hoping to deconstruct, to slip past her frosty stare and robotic body language and capture an industry icon at the center of a cultural storm.

“Issue” is fairly extraordinary in the manner it grabs the fly-on-the-wall experience of Vogue, underlining the blitzkrieg of labor and ego it takes to piece together the magazine. However, the real draw here is Wintour, and while Cutler can’t snatch her essence (Wintour is far too camera-aware to let her guard down), he assembles a combustible mood of aggravation, judgment, and decision-making that makes for a spellbinding documentary.

Vogue is big business. To Wintour, it’s a personal mission, gathering the top names in design and photography to build a yearly road map for the fashion industry. Wintour is a tough cookie. She judges her employees from behind oversized sunglasses, wielding her opinion like a freshly sharpened samurai sword. She hates the color black and insists that fur belongs in the language of fashion. It’s unnerving how well Meryl Streep channeled Wintour for her performance in “The Devil Wears Prada.” While Wintour is top dog at Vogue, she’s assisted by a legion of personalities and artists, including Creative Director Grace Coddington. 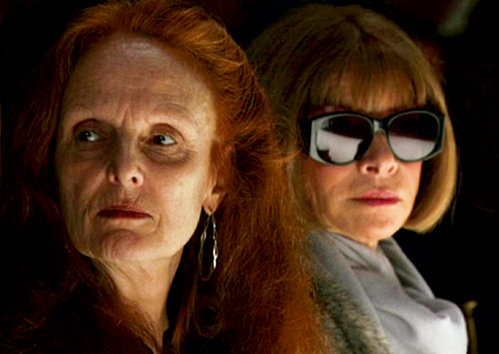 A former model and longtime Vogue employee, Coddington is Wintour’s greatest asset and worst enemy. Brought to the American version of the magazine around the same time, the two stubborn ladies share a love for fashion, but diverge on the balance of magazine sales over artistic accomplishment. It’s a respectful relationship fraught with tension, as Wintour slowly molests Coddington’s amazing creativity during the production phase. All Coddington can do is protest to Cutler’s camera, and her candid nature is a sublime antidote to Wintour’s programmed restraint. Her wistful thoughts on the changing face of fashion, it’s needlessly high-tech visual requirements, and Wintour’s chilly leadership provide the jolts of honesty that elevate a dangerously sycophantic documentary like this. Coddington is the mother hen that humanizes the magazine, and observing her roll through the rainbow of emotions as her work is both marginalized and celebrated by Wintour are the highlights of the film.

If “September Issue” doesn’t offer a definitive argument for Vogue and its industry shaping reputation, it does find a mesmerizing pulse of creativity to relish. Watching Wintour and Coddington spar over details, including the shabby appearance of cover girl Sienna Miller (described as “toothy”), conjures unexpected tension and emotion. Even for fashion industry cynics, the picture retains a riveting peek-behind-the-curtain posture that brings about a new respect for Wintour and the staff of Vogue, perhaps even introducing a sympathetic appreciation for the often comical needs of its creators. 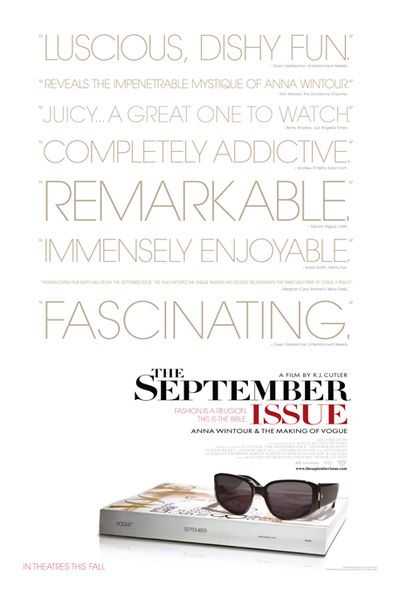