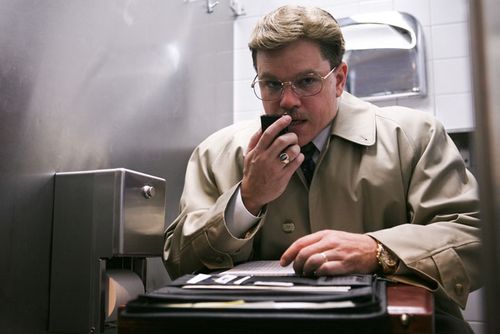 There’s an exclamation point in the proper title of “The Informant,” but I’m not sure why. Nothing happens in the film that warrants such dramatic punctuation, but I assume it means something special to director Steven Soderbergh. It’s getting to be a private carnival for the once engaging filmmaker, who appears to be chasing a Peter-Sellers-meets-Forbes bite for his latest picture, only to bury the jokes in three feet of baffling stylistic choices and tin-ear scoring. “Informant” takes some exertion to appreciate, but the payoff doesn’t quite reward the moviegoing effort.

An executive for the Archer Daniels Midland (ADM) agriculture corporation during the 1990s, Mark Whitacre (Matt Damon) decided there were massive amounts of fraud within the company that needed proper attention. Calling in the F.B.I. (Scott Bakula and Joel McHale), Whitacre revealed an elaborate price-fixing scheme centered on the food additive lysine, making the government eager to bring down the top executives behind the scam. Recruiting Whitacre, the F.B.I. turned the mild-mannered family man into a mole, capturing sensitive information through hundreds of taped conversations. Whitacre, growing increasingly bold with his own efforts to augment the investigation, starts to lose himself inside his own delusional world of spying and heroism, leaving those involved in the case with a growing suspicion about his motives.

While the Warner Brothers marketing hit squad is pushing “The Informant” as a wacky comedy of dumb guy super-spying, Soderbergh’s picture is more aloof wit than pratfall. He’s making a dark comedy about the remorseless corporate jungle, where there are no good or bad guys, just varying degrees of dishonesty. There’s also an intelligent, deftly layered screenplay by Scott Z. Burns (adapted from the book by Kurt Eichenwald) here to steady the director’s aim. There’s nothing outright wrong with “Informant,” but the picture can’t shake a bizarre inert sensation, though Soderbergh does attempt to keep the material as fizzy and swift as can be. He fails, but the struggle is perceptible.

Part of the energetic effort is handed to composer Marvin Hamlisch, a music legend who hasn’t gone near a motion picture since 1996’s “The Mirror Has Two Faces.” Hamlisch has his orders to invent a generous comedic soundscape for Whitacre’s antics (his personal accompaniment of courage), but the result is a broad score with appearances by kazoos and Ragtime tangents. The music turns poker-faced corporate clowning into “Prairie Home Companion” at times, working against the picture, contributing to the Soderbergh’s drained execution. The soundtrack actually appears to be having more fun than the movie, leaving behind an unnerving disconnect that confuses the film further. Hamlisch provides reassuring top-hat-and-cane energy while the film sits around stewing in butterscotch-colored anachronistic cinematography (for a film set in the 90s, it looks like a 1972 Hal Ashby film), staring off into space waiting for punchlines that never arrive. 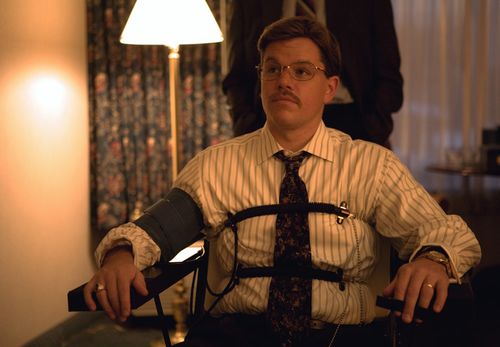 Matt Damon adds some vivacity as Whitacre, the ringleader of deception who imagines himself a James Bond character, scrapping with evil for the betterment of the world’s corn-based economics. Running a breathless inner-monologue of self-praise, trivia, and paranoia, Damon’s performance is the lone element handed a wisp of depth within the entire film, while also supplying the only substantial laughs. Under an itchy wig and behind a mustache, Damon interprets Whitacre as a good-natured gentleman caught in the middle of a various schemes only he can solve; a pure soul stuck in a Grishamesque scheme of 360 degree corruption.

The supporting cast performs as needed, though it’s good to see Soderbergh was a fan of “Best Week Ever,” filling fringe lawyer and executive roles with Patton Oswalt, Paul F. Tompkins, and Tom Papa, not to mention hiring comedians Allan Havey, Tom Smothers, and Bob Zany. Perhaps it’s Soderbergh’s crushing sense of irony to cast so many comics in a film that has little concern for laughs.

“Informant” is smart and cunning, but never as crisp as it believes itself to be. It’s a film stuck in neutral, a feeling never more highlighted than in the conclusion, where pieces of Soderbergh’s sharp farcical aim come into focus, adding a nice pinch of poison to the final minutes. The picture seldom excels as a comedy or as chin-squeezing satire, lost in the void of Soderbergh’s airy intention and deliberate distance. He’s never been one to indulge, but there once was a time when Soderbergh was able to please. Sadly, “The Informant!” never earns its exclamation point. It’s more of an ellipses motion picture. 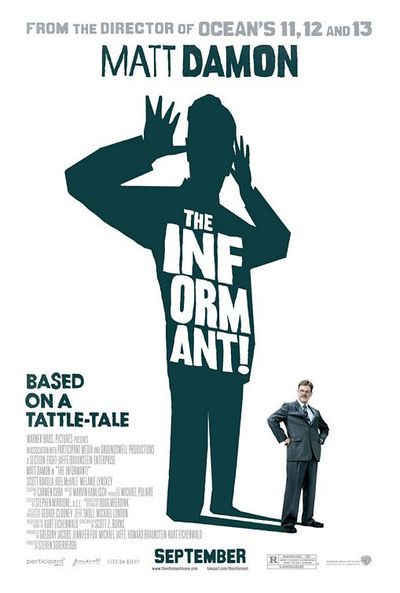 Steven Soderbergh is a fantastic film maker. He has done it all. So has Matt Damon for that matter. I am really looking forward to this movie.

Matt Damon is a genius playing this role...