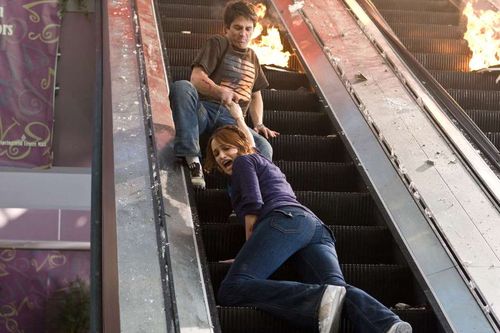 I’ll give “The Final Destination” this much credit: it cuts straight to the chase. The fourth installment of this dubious horror franchise brushes away story, characterization, and suspense to plunge straight into the squishy gore zone. And, for this round of splatter, the nightmare has been augmented by random 3-D effects. “Final” is a colorful package of scares and snickers, but it’s pure routine, handled anemically by filmmakers more interested in shameless profit than invigorating genre creativity.

At a NASCAR-style event with his friends (Nick Zano, Haley Webb, and Shantel VanSanten), Nick O’Bannon (Bobby Campo) has a vision of unimaginable terror, watching in horror as a majority of the spectators (including Krista Allen, Mykelti Williamson, and Justin Welborn) are killed in various unspeakable ways. Urging the gang out of the stadium, Nick watches as his prophecy comes true, leaving the group shell-shocked. Recognizing that death is still coming after them, Nick frantically attempts to thwart destiny, hoping to decode his visions and save the oblivious survivors from a far more grisly fate.

Travel all the way back to the year 2000, and you’d find “Final Destination” to be a slick, clever horror film that successfully distorted clichés to manufacture its own velocity of carnage. It was an unexpected treat, offering audiences a heaping helping of jocular brutality, sold through a Rube Goldberg-style presentation that twisted each kill into a chain reaction of demonic afterlife purpose. The formula was extended for two dismal sequels, both of which failed to seize the same ambiance of shock the first film was built rather wonderfully upon.

“The Final Destination” forgoes any substantial pass at a story to tie the madness together, sprinting ahead as a straightforward cheap thrill machine, balancing a skeletal narrative on massive batches of fatality. Director David R. Ellis, returning to the fold after his work on 2003’s “Final Destination 2,” approaches this fourth lap around the track in a dispiritingly clinical manner, arranging the death set-pieces with all the excitement of a slaughterhouse part-timer, glumly going through the motions with nothing more than a paycheck motivating his enthusiasm. Ellis has never revealed much of a personality during his directorial career (“Snakes on a Plane,” “Cellular”), and “Final” only encourages his tedious vision.

Even gifted the cheat of 3-D to jolt audiences, Ellis can’t electrify the material in the least, ticking off sequences one by one, concentrating more on shock value gristle than intoxicating builds of suspense. It’s a given the audience will be one step ahead of the picture, especially with three other films covering the exact same ground with diminishing returns, but “Final” is positively asleep, doling out the expected with minimal pop.

Not helping the cause is the pedestrian screenplay by Eric Bress, which offers a bizarre undercurrent of racism to help make the film even more uncomfortable. The acting is also hideous, hoisting much of the drama on the backs of untested actors who can’t handle the weight. Obviously we’re dealing with unfussy horror mechanics, but the ensemble fails to provide the requisite anxiety, often looking upon agonizing death as a mild nuisance akin to a hangnail or a lengthy stoplight. They’re meat for the slaughter, but without sufficient terror in the face of extravagant annihilation, the young performers deflate “Final” long before it has a chance to show its fangs.

With escalators, lawn mowers, pool pumps, car washes, and ultimately a 3-D movie used to grind and chop up this collection of one-note clowns, “The Final Destination” reheats the package of fate and premonition with snoozy panache. Thought the title all but demands finality to the franchise, something tells me the “Final” at play here is more wicked irony than a welcome promise. 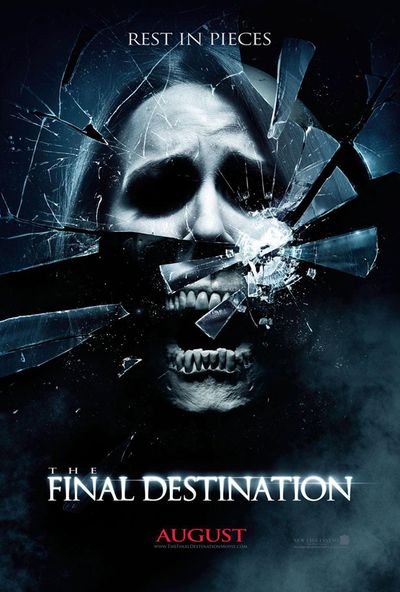