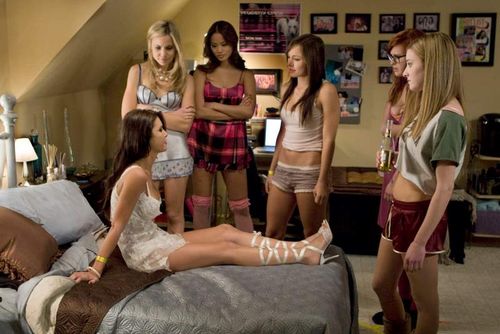 While an update of the 1983 chiller “The House on Sorority Row,” the shortened “Sorority Row” brings its own special facepalm inanity to the party. Reducing slasher ingredients to their most flavorless appearance, “Row” is a total wash-out, a contemptible pile of malarkey that takes modern horror to new lows of boredom and sluggishness, not to mention unfettered annoyance. Imagine being trapped inside a pungent shoebox with the over-caffeinated morning shift of Forever 21 while an inept epileptic captures the small talk with a camera he lost the instruction manual for. That’s “Sorority Row,” and it’s one repellent motion picture.

Entering their senior year, the girls of the Theta Pi sorority are ready to party and bond, with alpha dog Jessica (Leah Pipes), moral Cassidy (Briana Evigan), boozy town bicycle Chugs (Margo Harshman), flirt Claire (Jamie Chung), and nerd Ellie (Rumer Willis) ready to inaugurate the best year of their lives. Looking to exact revenge against a lowly cheater, the sisterhood of the unbuttoned pants elects to play a prank on the hapless horndog, using house idiot Megan (a well-cast Audrina Patridge) as bait. When Megan ends up murdered by the panicky frat guy, the Thetas decide to dump the body, lest it get in the way of their sparkling futures. Eight months later, mysterious text messages inform the group that their murder wasn’t as secret as they thought. With a hooded killer running around town using a “pimped-out” tire iron as a weapon, the Thetas are targeted for annihilation, scrambling to survive their final night at the University of NoMeansMaybe.

Not that the 1983 picture was any tremendous work of art, but it allowed itself some creepy atmosphere, working against its low budget to drum up a few scares and good-natured tension. Also, the film was about women, matured college ladies with some sense about them (as much as 80’s slasher rules would allow), who committed a terrible act and are quickly forced to wiggle their way out of certain doom. “Sorority Row” is about girls, insufferable creatures scripted as heavily made-up numskulls who fail to grasp the severity of their actions no matter what’s directly in front of their eyes. These are the heroes according to the film, but I never understood how the production could honestly think anyone might wish these young harpies a happy night of survival. 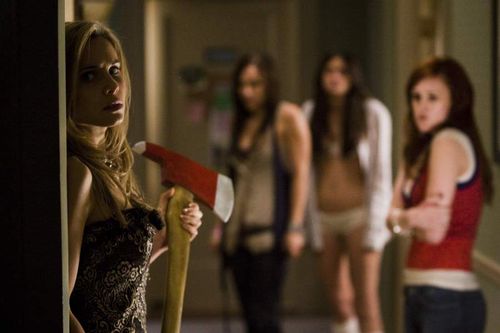 Perhaps hero is the wrong word to describe the ladies, since the screenplay doesn’t exactly contain a moral center to gauge sides. “Sorority Row” is slasher ground chuck, crudely shaped into a routine multiplex distraction by Stewart Hendler, a director who demonstrates throughout the film that he should think about an alternate career path. Arming himself with every possible horror film camerawork cliché, Hendler is all style and no substance; he’s a filmmaker more concerned with visual clutter than pulling together a satisfying horror experience with just a hint of gravity to it. Hendler’s diet soda method of madness is instantly numbing, glumly working through the kills, spending more time on lighting and angles than urgency, which flattens every single death.

Even as a disposable horror film, “Row” is exasperatingly imbecilic, due greatly to Hendler’s permissive attitude, allowing his cast to play to the rafters with their Crayola character personalities, making group scenes an unbearable battle royal of amateurs. I suppose building an ensemble from “Step Up 2 the Streets,” “Princess Protection Program,” “The Hills,” and “The House Bunny” isn’t exactly polishing Oscar gold, but lordy, when these young, fiercely untalented ladies get rolling with the screeching, tears (Willis spends half the film whimpering), irony, and indication, one hopes the hooded lunatic will target the projectionist next, just to make it stop. Pretty things, indeed, but vacuous mannequins to the bitter end.

Since there’s nothing even remotely approaching terror in “Sorority Row,” the film swerves over to camp to save the day. Becoming a blood-spurting comedy is the absolute worst idea Hendler commits to, making a dreadful film straight-up unendurable. Again, the dead-eyed cast doesn’t possess the chops to pull off macabre giggles, and as the excruciating running time (100 brutal minutes) ticks by, the pain of watching this dreck only grows more insistent. “Sorority Row” is one of the worst movies of the year, and even the hollow standards of horror can’t hide the idiotic execution of this garbage. A film as irritating as it is moronic, “Sorority Row” won’t have you rooting for the (apparently flame retardant) girls or the pulled-out-from-the-screenwriter’s-behind killer, only that the promise made at the end of the movie for a sequel is never kept. 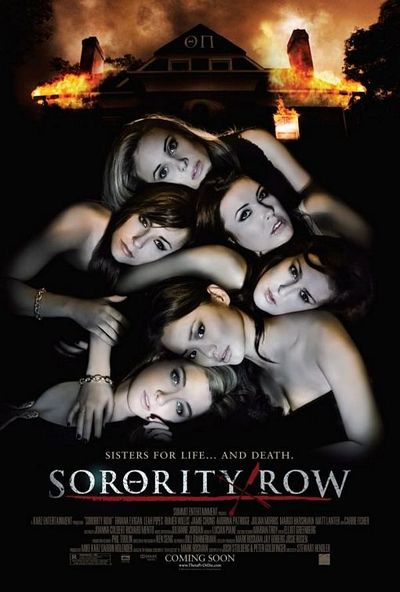 One of the best teen slashers in recent memory. Fans of 'Scream', 'IKWYDLS' and plenty of other slashers will love this. Slasher fans and lots of horror websites are loving it for a reason. Roll on the sequel.

This movie was terrible! What a waste of my time...

I laughed so hard through this review! Awesome writing man! I'm making a note right now to not allow my daughter to attend the University of NoMeansMaybe right now.

And fellow commenter "B" you should probably think about getting your head examined...I mean everyone's allowed their opinion, but really. Really? You're excited for a sequel to this crap?

Now I must go print this review out and frame it on the wall.

Total piece of crap movie, and thank you for mentioning the shaky camera nonsense. Does every film need to look like it was shot during an earthquake?

This is a terrible slasher film, don't let anyone fool you. If the "horror websites" like it, you know its bad. Those guys are more corrupt than the republicans. They'll do anything for set visits and junket invites.

What garbage. Surprised you didn't mention Carrie Fisher in the review. Considering how she looked and sounded, I understand why. We'll always have Slave Leia.

You can blame the media for dreck like this. People find insufferable buffoons so damn charming. How can you explain the success of "The Suite Life of Zack & Cody" and its spinoff, as well as every piece-of-shit reality show on ABC, MTV, NBC, and VH1?

But how gorgeous does Audrina Patridge look on this month's Maxim magazine!

I hate to say it but that picture at the top is enough for me to want to give this a try. Maybe they should gone for a more soft-core-porn approach.