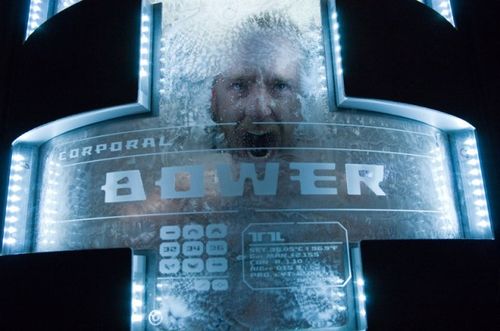 “Pandorum” is primarily sponsored by claustrophobia and glow sticks. Created with slippery, slicing European instincts, this sci-fi/horror voyage into the dark recesses of the mind is perhaps best appreciated with the sound off. A gorgeous production design can’t save the picture from trying too hard to dazzle with very little inspiration, and while “Pandorum” is easy to stare at, it can be a seriously punishing sit.

Forcefully awoken out of hyper-sleep, astronauts Bower (Ben Foster) and Payton (Dennis Quaid) are left with little memory and power to help acclimate them to life onboard a massive spaceship heading to an unknown destination. Sent to restart the power source, Bower crawls into the bowels of the ship with only minimal light to guide him. Instead of help, Bower stumbles upon a group of warrior-types who are trying to elude a mob of killer mutant creatures multiplying throughout the ship. As for Payton, he has to deal with a paranoid crew member (Cam Gigandet) who might be lost in the throes of “Pandorum,” a special form of madness that turns his initial confusion into a major threat.

Directed by Christian Alvart (“Antibodies”), “Pandorum” is more easily described as a riff on the 1997 chiller, “Event Horizon.” Both films share a curiosity with deep space madness and the isolation of interstellar travel, observing characters hurtling toward the unknown, facing horrors both real and imagined. While “Horizon” was a more literal descent into Hell, “Pandorum” itches to play deadly mind games and flop around in mutant spit.

Alvart shows a promising eye for forbidding spaces, shoving the audience into impossibly tight confines and encouraging his actors to freak their way out. If there’s anything to admire about “Pandorum,” it has to be Alvart’s obsession with depicting discomfort and panic, getting the characters into narrow situations that immediately lack sufficient air flow. However, that’s the last of my appreciation, as “Pandorum” is all too eager to engage in hysteria to cover the holes in the script.

Wearing his Ridley Scott cape, Alvart aims for a coolly stylish look to “Pandorum,” with hard cinematography, steamy hallways, and strange light sources joining together to add a layer of menace to the tale. Ostensibly a monster movie, “Pandorum” is better off as an obvious haunted house experience, with liberal usage of shock jumps and gore to keep viewers on their toes, but it never terrifies. There are a few futuristic touches that keep things interesting, but the majority of the film is Bower dodging ghouls, running around the cavernous ship on the hunt for power. At least with the mutants, “Pandorum” is numbingly predictable. Once it goes inside the mind, it just gets embarrassing.

While everyone looks the part, the casting flatlines quickly. Watching Foster’s bug-eyed, clenched-jawed performance is almost comforting in its inevitability -- the actor always gravitates toward roles that require painfully obvious, showy behaviors. Quaid does his grunt routine with limited effort. It’s Gigandet who smashes the film to bits, offering an agonizingly vacant performance for perhaps the most crucial character of the feature. His limited abilities are stretched beyond comfort, with Alvart displaying more effort timing out his strobe lights than keeping Gigandet panicked within reason. I never thought I’d see the day when it wasn’t Foster ruining a movie.

The who? The what? The where? “Pandorum” enjoys a healthy portion of sci-fi twists and turns as the production reaches for a fitting finale. I didn’t buy the closer, but at least Alvart is finally trying to challenge the audience beyond spooky, sweaty beasts jumping into the camera. A derivative production from the get-go, “Pandorum” loses steam with every forward step, leaving the conclusion more welcome for its finality than its resolution. 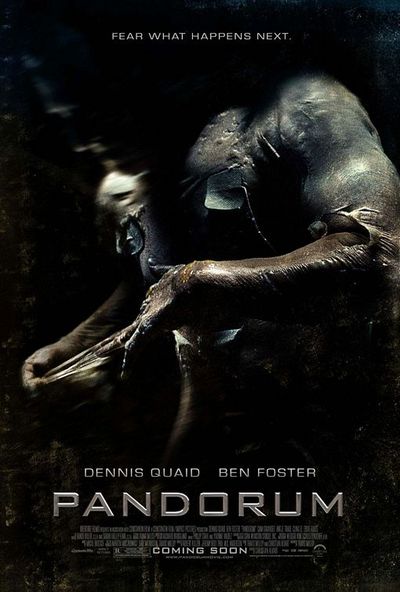 This has not plot holes, it just a bunch of set piece run from the doom/quake-ish monsters and repeat, with a serveral really lame and disjointed attempts to scrawl out a believe-able premise. At the end we never really know what happened, and who was responsible. It looked like they ran out of money, and said screw it, and just patched up what they had and shipped it.

You know what? This movie was a lot of fun, good fiction, decent science, realistic characters and a real surprise over what I was expecting. (ending was great by the way, you just have to think a bit harder than most audience members are willing to invest) A lot of bad press, lack of press, and lackluster reviews had given me really low expectations going into this flick but it totally impressed me overall.
I think the biggest mistake most reviewers are making with this film is labelling it a monster film, because it's not. This is science fiction, an extrapolation of current events extended over a given timeline and creatively expounded upon possible outcomes. How great is it to wake up on a ship and not remember your name, your mission, even your purpose? The movie unfolds only as Bower (our protagonist) becomes aware, it's natural, keeps the tension and pacing tight, and it's a lot of fun. Some great set pieces and atmospheric lighting created some really neat claustrophobic effects. And the ship itself appears almost organic and sentient at times. Most of all, I love that the characters were intelligent, they did things that made sense while they were scurrying about the ship, struggling to save the dying heart of their vessel. Not once did I say, "you're an idiot for doing what you're about to do, stop that". After the film was over my friends and I sat and talked for an hour speculating how certain things could've come to be and where their race would go from here, it was great stuff. I was expecting a "C+" and I came out of the film feeling a strong "B+" which again is a great surprise, highly recommend and have shown it to three other friends so far who've all really enjoyed it.

I dissagree with you and all the other critics on so many levels, its not even funny.

One might think that these so called "critics" know what they're talking about, but reviews like these on pandorum leaves me in doubt.

Pandorum is one of the best sci-fi thrillers i've seen, the ordience gave it high ratings aswell.B+
While these "real" critics thought the movie was rubbish.It made me realise that they're just humans, their education was a timewaste.They haver learned nothing.

I will never trust a critic opinion ever again, rating such a good movie this low.
There are so many crap movies, and out of these, you think this is bad?
Unbelieveable.

I cannot fathom the stupidity.The real rating is about B+ to A- .

Very good movie, despite bad reviews. This movie was very different, and interesting, I don't know why it got bad reviews, the critics can shove their thumbs up their asses, this film rocked!

Just saw it today for the first time. I had heard it got bad reviews too, but thought I would give it a shot anyway. I LOVED it! What is wrong with these reviewers? Good plot, interesting characters, some gore, good suspense, and GREAT ending. Non-sci-fi people should NOT be reviewing these types of films. Like the previous comment, strong B+.

Uh, you do realize that Event Horizon was rip-off of Disney's The Black Hole and Solaris? Pandorum can be described as an allegory of The Divine Comdey and Hesiod's "Works and Days"(degradation of the human condition) and there are references to the peoms in the film. Hence the title which is derived from Pandora and Pandemonium. Plus I really don't see holes in the script. I give this movie a B.