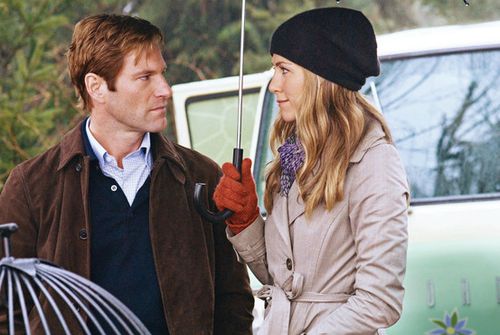 There are certain decisions a film production can make that will immediately cast doubt on the mental capacity of those in charge. Hiring irritating actors Judy Greer and Dan Fogler to play buddy roles in “Love Happens” is a terrific way to state to the audience that filmmakers have little to no imagination, looking to the routine and the tiresome to squeak by with a minimal amount of effort. “Love Happens” isn’t a horrendous picture, but it could’ve been so much more vital and textured, and it could’ve done without the wretched BFF sleepwalking of Fogler and Greer.

Wrestling with grief brought on by the death of his wife years earlier, Burke Ryan (Aaron Eckhart) has funneled his energy into the bestselling “A-Okay!” self-help book, pushing him to the verge of Dr. Phil fame and all the endorsements and cash that comes with it, encouraged by his eager agent (Dan Fogler). Returning to Seattle, the burial city of his wife, to host one of his demonstrative seminars, Burke runs into florist Eloise (Jennifer Aniston, forever warm and personable), finding attraction to her gentle, peculiar spirit after years of woe and alcohol consumption have shrouded his heart. As their flirtation develops into something more personal, Burke is spooked, pressed to take inventory of his soul and his hypocritical teachings, while sitting on a secret that could hurt his professional and personal future.

Setting crosshairs solely on Fogler and Greer (here as Eloise’s insistent, sitcomesque pal -- the one she plays in every motion picture) is unfair, since neither actor remains in the film for very long. I emphasize their work because they represent the stale attitude of this movie; it’s a friendly enough concoction, but one that doesn’t make much time to surprise the audience with inventive casting or penetrating emotional content. “Love Happens” is comfort food cinema, arranging little blips of heartaches and romantic butterflies to give viewers a few smiles and sniffles while two handsome adults work out their hopes and fears. You see this stuff on Lifetime every night.

Co-writer/director Brandon Camp (son of “Benji” guru Joe Camp) wisely fixates as much as he can on Burke’s contradictory life, and the misery of his ascension into a media superstar, founded in dishonesty. Traveling around the country manufacturing emotional cleansing for the bereaved (character actor John Carroll Lynch contributes a thoughtful supporting turn as an anguished father), doling out mourning advice while his own life is clogged with sorrow, Burke is a fascinating character that Camp undersells through pedestrian writing. The character’s eventual sparks with Eloise come off unnatural, force-fed into a script that clearly wants to spend more time observing Burke battle his demons. Actually, Eloise is more of a fringe player in the story, and Aniston doesn’t appear in the film as much as expected, leaving Eckhart as the sole star. His work here is better than expected, but only when exploring the excruciating incongruity of Burke’s life. The romantic stroll isn’t nearly as convincingly sold.

“Love Happens” does have an irksome predictability about it, leading to a disappointing finale of pursuit similar to a thousand other movies. This being Camp’s first film, he hasn’t developed the desired ability to massage the ideal amount of complication out of the screenplay, and while passably engaging and even semi-poignant, “Love Happens” just doesn’t contain the urgency to sufficiently rouse the senses. 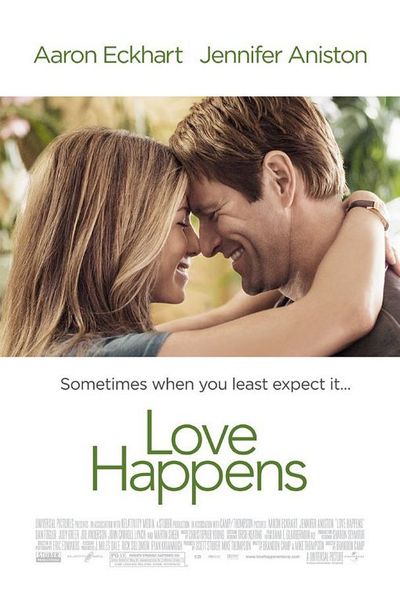 I like Judy Greer! She gets stereotyped in best friend roles because she's not the most conventionally pretty comedian in the world, but I'd take Judy Green and Leslie Mann over Jennifer Aniston and Katherine Heigle any day!!!

I am a big fan of Aaron Eckhart. I have watched his Love happens film and hope to watch it again. Guys, it carried tears in to my eyes as well as laugh. It is impossible to cry and laugh at the same time but this romantic movie makes it via heart melting story. Jennifer Aniston looks so nice in this movie. Truly it is a romantic plot which combines with load of humor too. No doubt this will be mega hit.