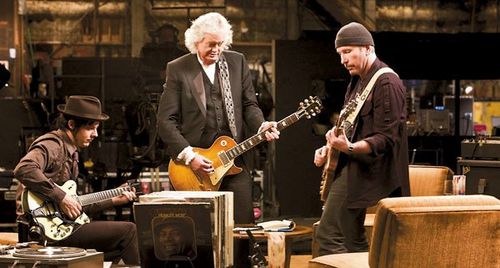 Rock superstardom is a rare achievement, never requiring actual talent, but crack timing and blind persistence to seep into the public consciousness, along with at least one passable tune. The status of rock god is an entirely inimitable designation. These men and women showcase barnstorming creativity that’s second to none, along with a unique career longevity that’s survived the worst of artistic disasters. More often than not, they also carry a guitar, wielding it with Excalibur-sized supremacy.

“It Might Get Loud” is a cozy conversation with three of these golden few: Jimmy Page of Led Zeppelin, The Edge from U2, and Jack White from The White Stripes (the film also pushes The Raconteurs as part of his musical identity). These influential men, representing three distinct eras of dominance and experimentation, congregated in January of 2008 to discuss their unanticipated careers and singular playing styles, trading war stories and personal influences while director Davis Guggenheim let his cameras roll, capturing this summit of prominent minds as the mood shifted from cautious introduction to mutual respect and performance abandon by the end of the day. And what a day it was.

Seemingly a documentary on the artists and their lifelong relationship with the guitar, “Loud” hurdles that boundary early on. Guggenheim is more preoccupied with the deep roots of musicianship; the burst of inspiration that takes a humble soul from playful experimentation to professional duty and worldwide recognition. For Page, it was years as a session musician, gathering industry knowledge while working with a diverse range of artists. Edge rode the volatile waves of the punk rock explosion of the 1970s, looking for the antidote to arena rock that would return intimacy to performance. White developed his urges while working as an upholsterer, nursing dreams through dire vocational experiences. The stories are rags to riches all around, but the picture pays little attention to the rise of fame, only the solidification of confidence and how guitar playing morphed from casual tinkering to an obsession. 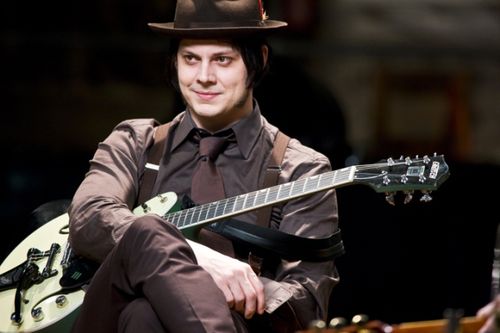 Guggenheim speaks fabulous fretwork fluently, which lends a fascinating layer of insider opinion to the picture. It helps to understand the nuances of guitars and their various working parts, but it’s far from a requirement. In fact, “Loud” is an incredible educational tool as it playfully demonstrates the way White, Page, and Edge achieve their distinctive sounds. Edge is perhaps the strongest example of six-string wizardry, turning his guitar into a sonic wonderland of pedals and pauses, allowing velvet ribbons of reverb to shape U2’s Cinerama sound. Watching him demonstrate his technique is a beguiling experience, especially when he breaks down the complicated soundscape to its barest working parts. Page and White are also captured in their elements, though White showcases more of a sly sense of humor, at one point engaging his adolescent self for a tutorial on the basics of bluesy rock theatrics.

There are several moments of pure rapture in the film: the trio casually working out the intro to U2’s flip-the-table-over-and-air-guitar classic, “I Will Follow;” Page recalling the recording of the god-like “Led Zeppelin IV” album; and White explaining the exact purpose of the early peppermint candy White Stripes aesthetic. There’s also plenty of talk of musical inspirations that swell the interviewees with giddy admiration, especially White, who seems near tears when talking of his love for blues legend Son House. For Page and Edge, it’s particularly interesting to hear their perspective on musical matters, allowed some wiggle room to chat miles away from their flamboyant, camera-hog frontmen. 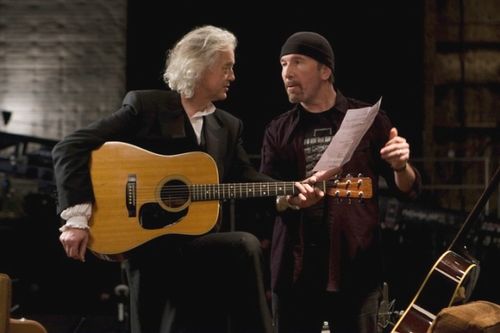 Guggenheim develops a theme of artistic community, not a test of competition, and that respect echoes throughout the picture, making the film not only a fascinating sojourn into the mind of virtuoso guitarists, but a spectacular valentine to the gale force rush of music appreciation. “It Might Get Loud” is contagious fun, informative and inspirational. Multiply the bliss by 1000 if you happen to be a fan of any of these men. Now, if you’ll excuse me, I have eight Led Zeppelin, six White Stripes, and twelve U2 records to put in permanent listening rotation for the rest of 2009. 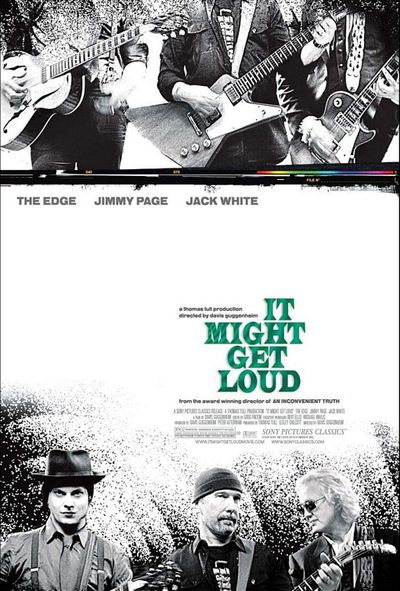 Thanks for the review. I look forward to the the day that this film finally comes to my local theater [unless I win a sweepstakes]. There is no longer a visual medium for musicians to share their stories [demise of MTV & VH1] so Im glad someone did a film.
I am a fan of Jack White & The Edge & admirer of Page [never dug into the roots enough to become a true fan] I find them all to be interesting characters as their legacies transpire just pop music.
Creating the music they have is a true art form and should be respected as such. They are renaissance men [too bad Dave Grohl could not have been included here]
I hope David Guggenheim gets more funds to do other films of this ilk.
*now where is my guitar.*